A second bite at the cherry after yesterday’s frustrating draw at the Valley. Sunderland Ladies face Charlton this afternoon and we have all the information you need right here. Get yourself down to Eppleton, it’s a 2pm kick off.

Tickets: Tickets are £5 for adults and £2.50 for Under 16s and Over 65s. Under 14s get in for free today. Sunderland men’s season ticket holders can also get a 1⁄2 price ticket for this match. Book online now or pay on the gate with a card.

Highlights: The FA Player will have highlights and a full match replay from Monday afternoon.

Podcast: All things being well, we will have the Lasses Podcast Live as usual on Monday night, 8.30-9.30 pm where we will be joined by Sam Clarke from the Proud Vallients to discuss the game.

All that and more on tonight’s live discussion, in association with @HerGameToo#HawayTheLasses | #SAFC ⚪️

Fourth versus tenth, part-timers versus full-timers... yet another hard task awaits Sunderland AFC this afternoon as we face Charlton Athletic at the Hetton Centre. The club have upped their promotion of this game with a wrap-around advert in the Sunderland Echo on Friday.

The sun should be shining and there’s no reason why we shouldn't draw in a good crowd to cheer on the Lasses.

The nil-nil draw for the Lads at the Valley in EFL League 1 yesterday was hard to stomach given the way they dominated the game, but the roles are reversed entirely in this FA Women’s Championship fixture as it’s Sunderland Ladies who are desperate for a win and Charlton who have been in very good form of late.

Heading to Eppleton on Sunday to back the Lasses?

Considering your plans for the weekend?

Here's all you need to know as we take on Charlton Athletic Women... #SAFCLadies

Mel Reay will be concerned that the Lasses have not been able to turn their undoubted uptick in performance levels into points in the league, and they now sit third bottom after Blackburn picked up a win against Lewes last weekend.

Relegation isn’t really a worry for Sunderland as it would take something miraculous from Coventry United to make up the 16 point difference with only 21 points left to play for, but it cannot be good for morale to not have won since we beat Charlton away on Halloween.

Reay’s Gateshead College side, which includes many of the Sunderland youngsters, progressed into the English Colleges FA Women’s Premier League National Playoffs this week, so keeping that good mood going into the FA Women’s Championship will be vital if we are to pick up the win today.

No post-match videos, press conferences, or interview with the Echo for Reay this week, but in her programme notes she maintained her belief in the side:

[Palace] was another match in which I think we showed plenty of what we’re about. I was really pleased with the way we came out of the blocks - we’re starting to create a lot of chances in these game. I was delighted what we were competitive and in the game. We’re learning as we go as staff and players, and the harder and more consistently that we train, the more momentum we can build.

Neve Herron will be back in contention following her ban and Abbey Towers making an impressive second debut for the club against Crystal Palace last weekend after coming off the bench for the injured Megan Beer - there’s every chance that we’ll see a slightly different line-up this afternoon with Herron in a more advanced role.

Good run around for this lot today v Northumbria! ⚽️

It’s tight at the top of the league, with only a four-point spread between second and fifth place - if there was a second promotion place then the competitiveness that has marked out the Championship this season would be even more intense.

A draw away at Coventry United in February was probably an unexpected drop-off in results in what has been a remarkable period for the Valiants, and a loss away to WSL side Everton in the FA Cup last weekend was probably expected given the gap in quality between the two divisions.

Charlton’s Head Coach Karen Hills, speaking at her presser on Friday, is trying to take the positives and learn the lessons from last weekend into today’s match:

I’m looking forward to it, its a long trip but we’re fully prepared and hopefully all the preparation this week has put us in good stead for playing. ... I thought we played well [against Everton]... we played some of the kind of football that we wanted to play in patches, we definitely got some of our patterns and work that we’ve been working on to try to affect the game, but when we were on the transition we needed to be better.

️ "We are in a good place on and off the pitch, and now we have just got to take that mindset into the next few games."

I opened the head-to-head stats page on Footystats.org with a little trepidation this week, and so at least I wasn’t shocked to learn that all the indications are that Sunderland have their work-cut-out if they’re going to get the three points this afternoon.

Our home win percentage is 14% - that’s half of Charlton’s away win percentage, and that’s largely down to the difference in fire-power between the two sides.

Both our home xG and average goals scored are around 0.85, which is just about the same as their xG and xGA away from home. But in reality, they’ve conceded more than a goal a game on the road, so we do stand a chance of getting on the scoresheet. Going forward, Charlton will also be expecting to score - they have almost 1.3 average on their travels.

Welsh international forward Elsie Hughes is their most dangerous player with six goals in the Championship this term, and both Emma Follis and Ella Rutherford have as many as Sunderland’s leading goalscorer, captain Keira Ramshaw.

But as we always say, the data only tells you what has happened in the past, it doesn’t predict the future, nevertheless, the odds in this encounter point towards either an away win or a low scoring draw

(All venues, all competitions, including friendlies)

Our match preview for the away game back in October 2021 incorrectly said that the clubs had never previously met in women’s football and that Sunderland’s 0-1 away win over Charlton was the first ever meeting between the sides. This was totally wrong.

I’ve since bought a programme from the 2005 FA Cup Quarter Final played on 13th February 2005. Wikipedia tells us that Sunderland - with Jill Scott, Steph Houghton, Carly Telford and Mel Reay in the squad - lost that age 4-1 that day against a Charlton side that sat top of the Premier League National Division and included Ertha Pond, Katie Chapman, Eni Aliko and Casey Stoney.

Charlton raced into an early lead, scoring twice in the first 13 minutes through Heaterhson and Broadhurt before Stoney scored an own goal to let the Lasses back into the game. It stayed 2- until the 89th minute when Aliko scored, and the game was put to bed a minute later when Champman rounded off the scoring.

Charlton went on to win the FA Cup that year, beating Everton 1-0 at Upton Park, and ultimately finished second in the league to Arsenal. Whilst Sunderland gained promotion from the Northern Division as Champions. In 2005-6 Charlton beat us 6-0 at home on the opening day and then 8-0 in the return fixture. 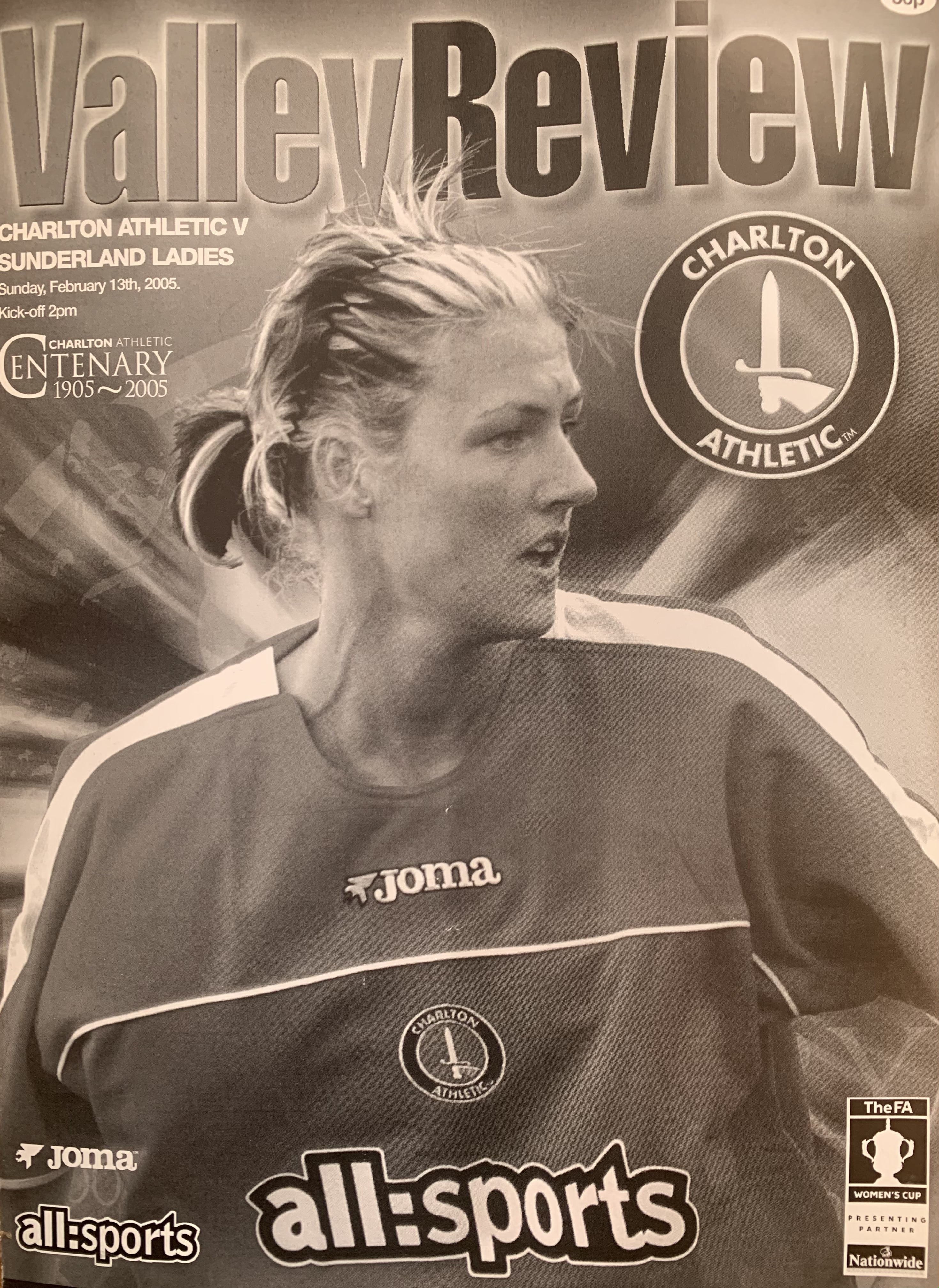 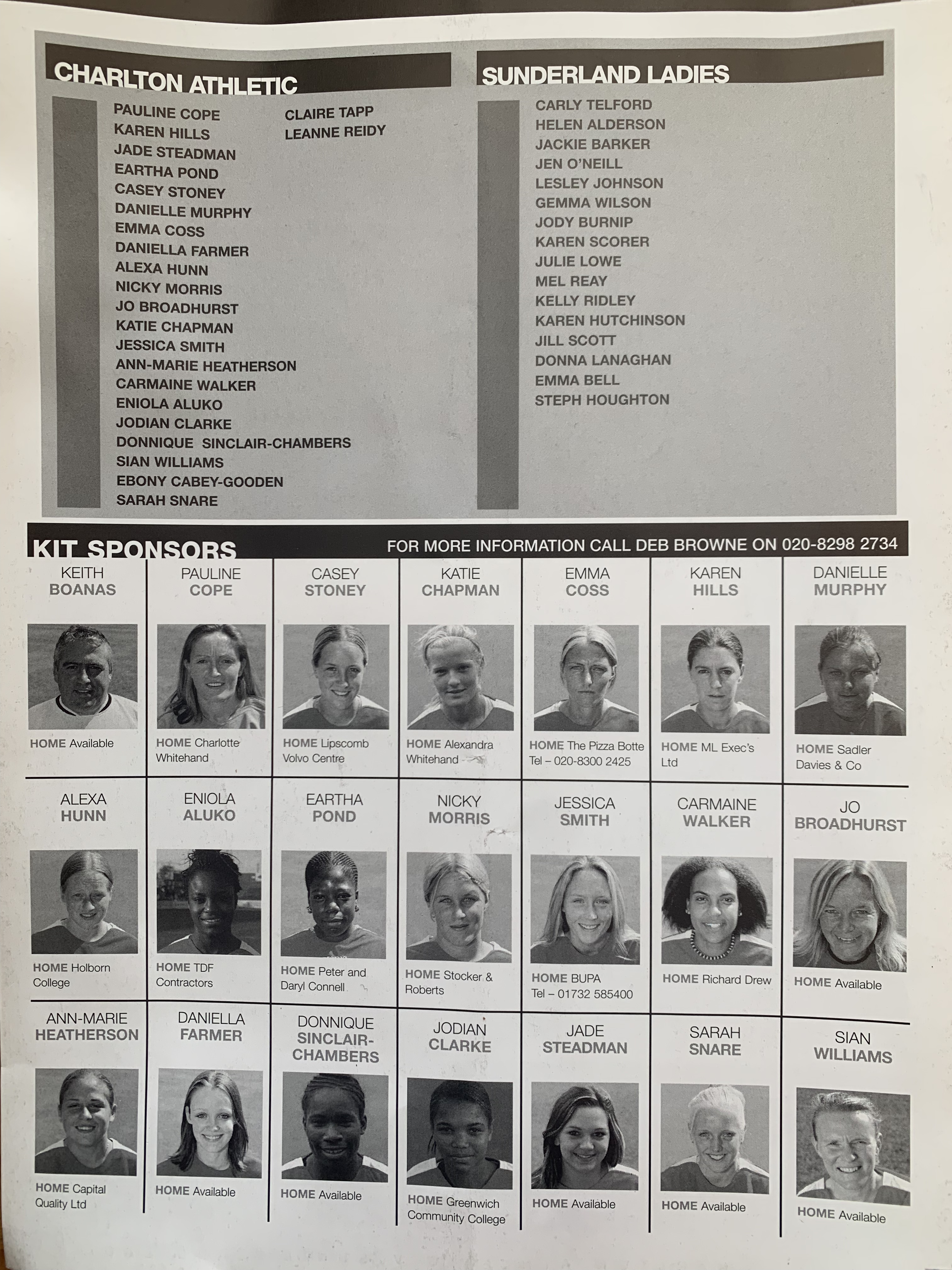 One to watch - Jorja Fox

One of the advantages that Charlton have over Sunderland is their proximity to some of the biggest women’s football clubs in the world, and therefore access to loan moves that we simply couldn't dream of.

There’s no better example of this than Chelsea and England prospect Jorja Fox, undoubtedly one of the most talented young players in the country, who made the move over to Charlton in January.

The 18-year-old fullback has already got an FA Cup winners medal having been on the bench for Chelsea’s 3-0 victory over Arsenal at Wembley in December 2021 final at the end of last has been capped twice by the national side at Under 19 level. She’s also appeared as a sub in the Champions League for the Blues this season and made seven appearances in league and cup since has coming down to Oakwood.

On her arrival at the club, owner Thomas Sandgaard said the move was exactly the kind of business that he wanted to see from the women’s side:

I’ve been really impressed with the progress Karen and her team have been making in such a short time after turning professional in July. We want to bring in a few players to help us during the January window and Jorja is an excellent addition who is highly rated at Chelsea. I’m looking forward to watching her play in a Charlton shirt.

Roker Report is a proud partner of the #HerGameToo campaign!

The grassroots movement fighting against sexism in football.

Sunderland show their character with a point at The Den

Grand designs of the Sunderland kind