Talking Tactics: What does the data tell us about Sunderland’s performance at Lincoln?

Sunderland lost 2-0 in the opening leg of the League One playoff semi finals on Wednesday night, with Lincoln’s incisive counter-attacks causing a myriad of defensive issues for the away side. What does the data tell us?

Share All sharing options for: Talking Tactics: What does the data tell us about Sunderland’s performance at Lincoln?

Lee Johnson made two changes from the side that drew with Northampton on the final day of the season, Tom Flanagan returned to central defence after a long injury layoff and Aiden McGeady also took his place back on the left-wing. They replaced Conor McLaughlin and Jack Diamond respectively, as Luke O’Nien switched back to a more natural position on the right of defence.

In truth, the lads struggled for almost the entirety of the first half and were only real in the ascendancy for about 20-25 minutes in the game. Lincoln’s incisive counter-attacking play led by pacey wingers proved to be too much for a shaky defence to handle. However, we missed three-four big chances and made numerous massive individual defensive errors, which has proven to be the one difference from our two contrasting runs of brilliant and terrible form of late.

Lincoln caused us a myriad of problems early in the game, with Michael Appleton clearly identifying one clear weakness - our inability to defend against the diagonal out wide. Repeatedly during the course of the first half, Anthony Scully and Mordan Rogers were the Imps’ outlet in attack, with Scully, in particular, taking advantage of Denver Hume, who struggled. Hume was dribbled past three times during the course of his ten-minute, injury-hit cameo at the start of the game. He also failed to win a single aerial or ground duel and failed to complete any defensive action in general.

Perhaps he started with an injury? Lee Johnson alluded pre-game that we were carrying two new injuries in the squad & was hesitant to name them. Clearly, one was McLaughlin - who is out for the rest of the season - and perhaps the other was Hume but Johnson maybe felt he had to risk him. This is pure speculation but would go some way in describing his horrifically poor performance levels before dropping out of the game with what seemed to be an innocuous muscle injury. Regardless, Lincoln continued their threat for the remainder of the game.

They may have had a lower xG than we did over the course of the game, but their play was fast and purposeful. The biggest worry for Sunderland going forward is the clear lack of purposeful play and ponderous pace of ball progression. Josef Bursik deservedly was the home sides Man of the Match, not only did he come in under a cloud merely days before the game, but he kept a clean sheet after pulling off a string of impressive saves and actually started a series of excellent attacks through his long-range distribution. Bursik found Hopper on five different instances all through long balls (as he himself also won 50% of his ground duels and 75% of aerial duels), and most of Lincoln’s high xT (expected threat) attacks came through this route of progression. As you can see in the passing graphic below, he really excelled. He also had among the highest xT figures of all players on the pitch.

Lincoln’s pacey attacks caused all sorts of problems for our entire defence, but everything they did well started with Bursik or Hopper. 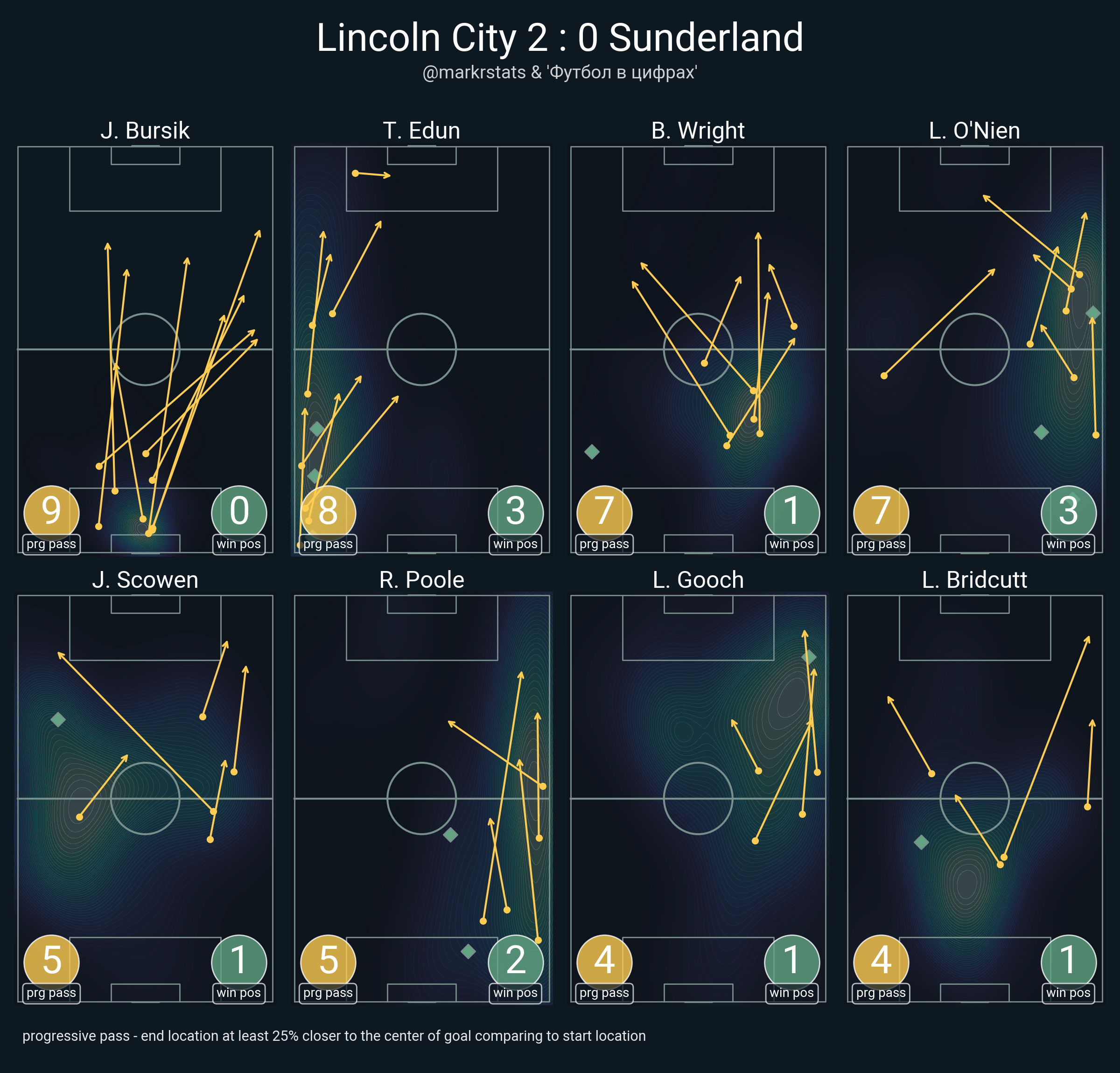 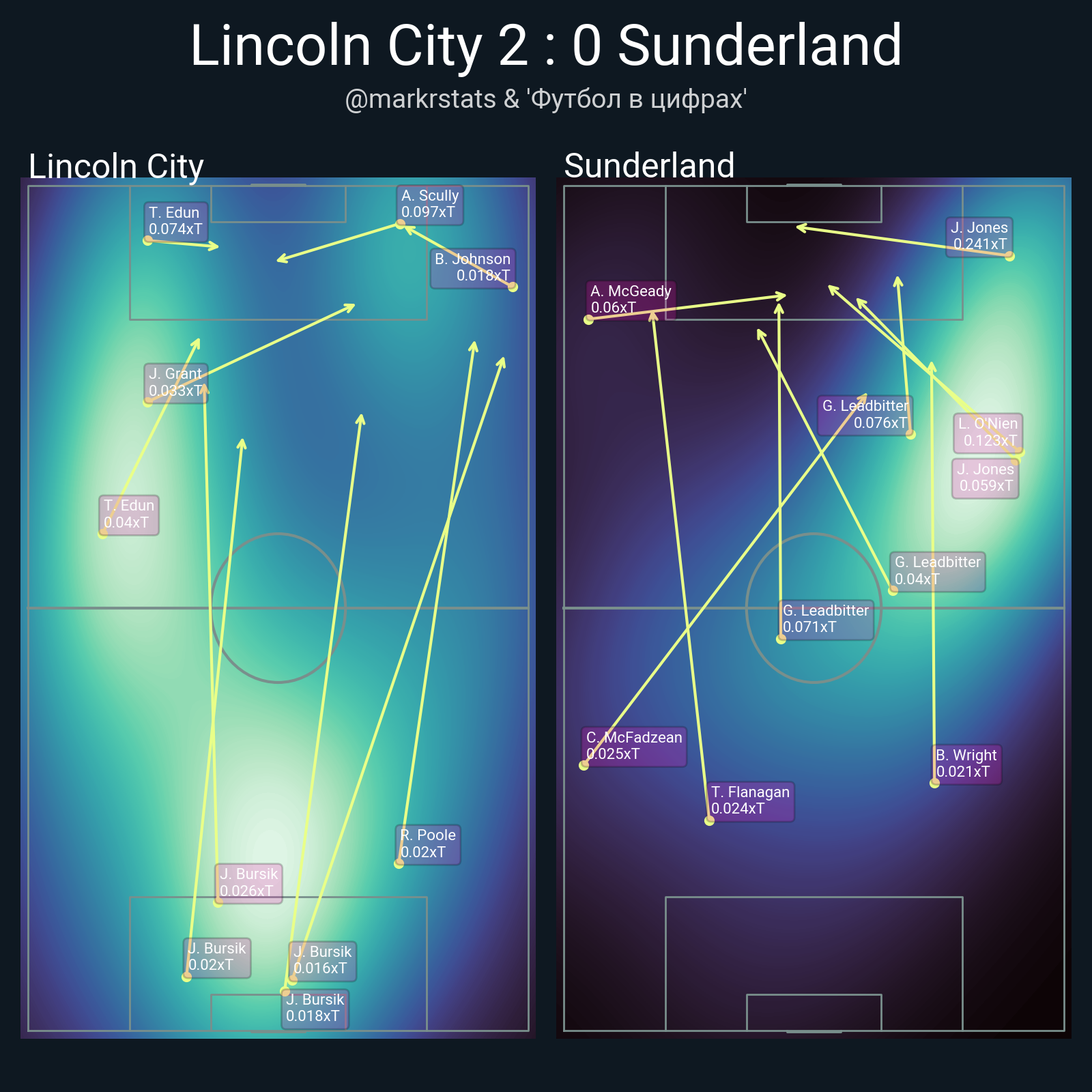 For the entirety of the first half, and much of the second, we had severe problems with our own ball progression. The causes of this are numerous: our defenders are not the greatest at vertically progressing the ball at pace, the midfield was passive and the strikeforce static. However, the biggest symptom of this stifled attack was a forced proclivity to go far too direct.

This is an interesting issue with the philosophy regarding our progression of attack, as Charlie Wyke spent the evening feeding off scraps, totally isolated and he himself underperforming. His movement off the ball was minimal and that one-on-one chance - that was luckily for him given as offside anyway - was a horrifically poor tame pass straight to Bursik.

As you can see below, our very scant few forward passes were, more often than not, lumped direct to Lincoln’s defenders. To be fair to Appleton, he has figured us out since the 4-0 thumping back in December. He no longer plays such a criminally high defensive line and instructed Tom Hopper to cut our passing lanes at every opportunity. Not only were we unable to progress the ball, but were totally outclassed in the individual duels on the night too:

When we signed Aiden O’Brien, Millwall fans led us to believe that what we were getting was a player like Hopper. Who would work tirelessly, win an overwhelming majority of individual duels, attack with pace and chip in with the odd goal. Well, Hopper has double figures this season, while AOB has largely struggled - aside from playing support, in a more defensive role.

This visualisation below, created by RR’s own Steve Tiltman, is glaring in highlighting our issues:

Changes for the 2nd Leg

For the second leg on Saturday, I believe Johnson may have to make wholesale changes. Or at least introduce both pace up top and calmness in the middle.

I’d introduce Ross Stewart, Jack Diamond, Chris Maguire, Grant Leadbitter and Carl Winchester to the starting lineup. It is clear our issues are in terms of ball progression, a lack of pace (both physically and in terms of playing the ball) and mentality. On Wednesday we had too many “battlers” and did not approach the game with a calm mind. The occasion got to a lot of them, for the umpteenth time in 3 seasons in L1.

Grant Leadbitter's introduction really calmed the lads down. He led by the front foot by allowing us to dictate play in the middle, holding his position and not losing his head. Unfortunately, not long after his introduction, we conceded a terrible second goal.

As a quick aside, the blame here lies largely with Tom Flanagan. Yes, Lee Burge could have kicked it out for a throw or took a touch to the side, but Flanagan is totally out of position when collecting Bursik’s long-ball, take a terrible first-touch, follows that up by turning inwards and putting his body in a terrible position by closing it up, then due to all of this, played a hospital pass back to Burge at least 6-7 yards short. He sold his ‘keeper short. Then, when Brennan Johnson presses Burge, he just stands there ball watching instead of shifting to disrupt Johnson’s press. It is just the latest in a string of high-profile, catastrophic errors from the former Burton man.

Either way, I’d persist with a 4-3-3 / 4-2-3-1 in which Lynden Gooch and Diamond flank Ross Stewart like they did at Plymouth. Stewart may not be the quickest, but he makes intelligent runs and is constantly mobile. Behind them, Leadbitter needs to play as the deepest midfielder with a combination of Winchester and Maguire on either side. Experience & a strong mentality are key if we are to overturn this deficit.

Cherishing the Championship! Sunderland’s promotion could be the start of an exciting new era

Editorial: The Euro 2022 festival of women’s football starts this week, and you’re all invited

Engine room options: How is Sunderland’s midfield looking ahead of 2022/2023?