Fan Letters: “It’s time to stop crying and get on with it!”

In today’s mixed mailbag we have desire for Maguire, the story of a little known 1920s player, season card troubles, and a call for us all to stop moaning on! Got something to say? Email us: RokerReport@Yahoo.co.uk!

Share All sharing options for: Fan Letters: “It’s time to stop crying and get on with it!”

Got something you’d like to get off your chest? Send us an email, and we’ll publish your thoughts here on the site!
CLICK HERE FOR OUR EMAIL!

I am shocked at losing the last two matches, especially Wigan who have now done the triple - beat us twice plus £4 million for Grigg !!

However, my main point is why is Chris Maguire not being selected by LJ ??

He is a wholehearted player who is also a game changer plus much better than the likes of Scowen and McFadzean. He is also a big match player and it is insult to have him playing for the under23s where he has nothing to prove !!

If we have Maguire, McGeady, Jones and Wyke regularly, we will surely win promotion.

Please can LJ select Maguire immediately for the run in as there is no time left for excuses??

Ed’s Note [Rich]: Thanks for writing in Harry. I think I agree with you and the other fans calling for Chris Maguire to be brought back into the first team squad this weekend. He has flashes of quality, bags passion and a big-game mentality. He can be infuriating at times giving away daft fouls and also disappears for periods in games, but he’s someone I trust to deliver from the bench in the last 20 minutes when we need a goal.

I’m 78 years old and live in Dublin. I am Irish but my mother was from Salford. Her brother (Tom Wagstaff) played for SAFC. When I was a child he came to our home in Dublin on a few occasions in the early 1950s on holiday. He told me about playing and gave me a photo in his SAFC gear which went astray over the years. It was at the time Charley Buchan played, he told me. I have been a SAFC fan since. I have never been to Sunderland and only seen them on TV.

Yours in hope of promotion,

Ed’s Note [Rich]: Thanks so much for your letter, John, it’s wonderful to hear your story of how you came to support the Lads.

It’s very interesting to look back at old players like your uncle Tom, and I can see that Tom Wagstaff did indeed play two games for Sunderland alongside Charlie Buchan in 1923. I have found that Bob Kyle signed him from Fleetwood in March 1923 for more than £500. Fleetwood were riding high at the top of the Lancashire Combination league and at the time Wagstaff was described as a “Clever Centre Forward” in the local Lancashire press. This was when Sunderland were challenging right at the top of Division 1; the Man City or Chelsea of their day, so that was a big move for him at the time.

Tom seems to be notable for the fact that on his final appearance, in the game away to Burnley in the April of that year, he picked the ball up with his hands after a tussle with a defender and hurled it towards the goal looking to score, but the ref saw it and gave a foul!

Then in November 1924 he was transferred back to Fleetwood, and he later successfully applied to the FA to have his transfer fee reduced to £100. He went on from there to Morecambe, where he won the Lancashire Junior Cup in 1924/25. It’s touching that that his short time on Wearside had such an impact on him that his own nephew in Ireland would go on to be a lifelong fan. Keep the faith! 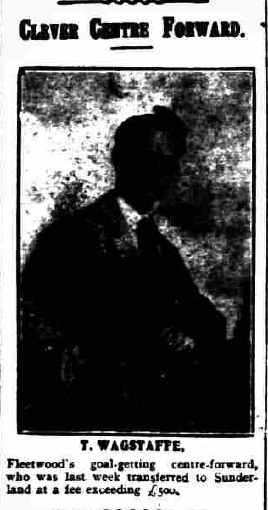 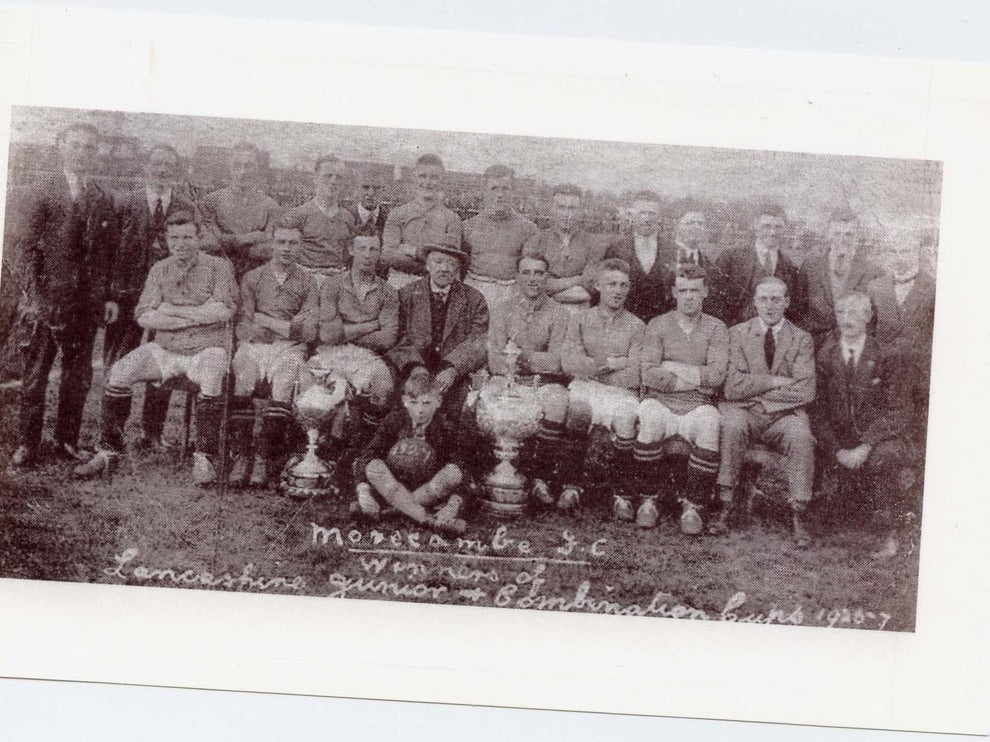 Tom Wagstaffe played for Sunderland, Fleetwood and Morecambe in the 1920s
Fleetwood Chronicle

Time to stop crying on and take the challenge head on.

What point is there in moaning?

Get on with it and support the Lads for god’s sake.

Ed’s Note [Rich]: We all support the Lads, Jack. Moaning gets us nowhere, you’re right, but we just say what we see, and on Tuesday evening the performance was simply not good enough. It certainly looks like we’ve now got to win all our remaining games to have a sporting chance of an automatic promotion spot, and I’m sure there are still a few twists and turns to come. It’s not over ‘til it’s over.

I’m sick of the useless way we’re supposed to renew season tickets. After persistent problems with “etickets” I tried calling. Same old recorded answer saying how valued we are as supporters, then after holding the line told by machine to ring back. Just about sums up the club.

E-Ticketing is infuriating, and no consideration for supporters of over sixty years who don’t have access to a computer!

Ed’s Note [Rich]: Thanks for your letter, Christine. It must be really frustrating not being able to get through, but I understand the ticket office is now open for telephone enquiries on 0371 911 1973. We will pass you the details Malcolm Bramley from the Sunderland Senior Supporters Association who may be able to help you directly if you're still having trouble, and you and other fans are encouraged to email ticket.office@safc.com, quoting their membership/ST number and an outline of the problem you're having.

Got something you’d like to get off your chest? Send us an email, and we’ll publish your thoughts here on the site!
CLICK HERE FOR OUR EMAIL!
INTERVIEWS!

Starting XI: Here’s who we think will line up for Sunderland against Fulham today

On This Day (28 January 1983): Sunderland make the most of their mid-season break!