Having scored an important goal, and picking the winner of the Grand National which netted a homeless charity in Sunderland £2500 in the process, Niall Quinn can’t have had many better days in his career!

Share All sharing options for: On This Day (10 April 1999): Sunderland bash the Terriers as Quinny nets £2.5k for local charity

“There’s so much more confidence in the team, and we will be more creative. You can feel the belief around the City.” — Niall Quinn, April 10th 1999

“On Grand National Day, Sunderland demonstrated once again that they are the First Division equivalent of Red Rum” wrote the Daily Mirror in their review of The Lads’ controlled 2-0 home victory over Huddersfield Town on this day in 1999 - funny yet absolutely true given Peter Reid’s side were well and truly running away with it at the top of the table by that point in the season.

Sat on 92 points with just five games remaining, Sunderland’s victory at the Stadium of Light over Peter Jackson’s side meant that a win three days later at Bury would secure promotion back to the Premier League - and with every single fan, player and staff member fully focused on winning the title, nothing was going to stop them.

Though, that’s not to say that the players didn’t have one eye on the big race at Aintree - with Niall Quinn picking the winner, and thus earning a cool £2,500 for a local homeless charity in Sunderland in the process. 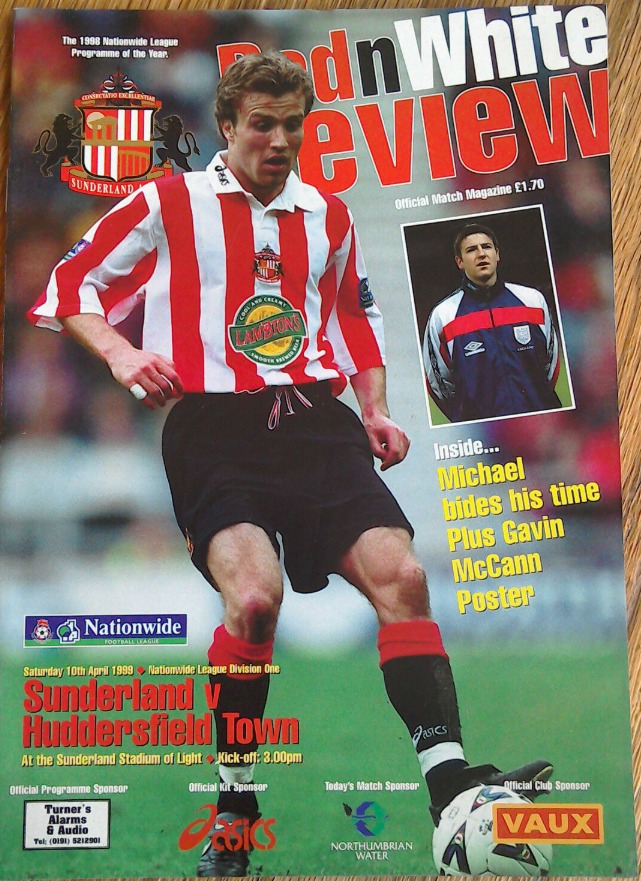 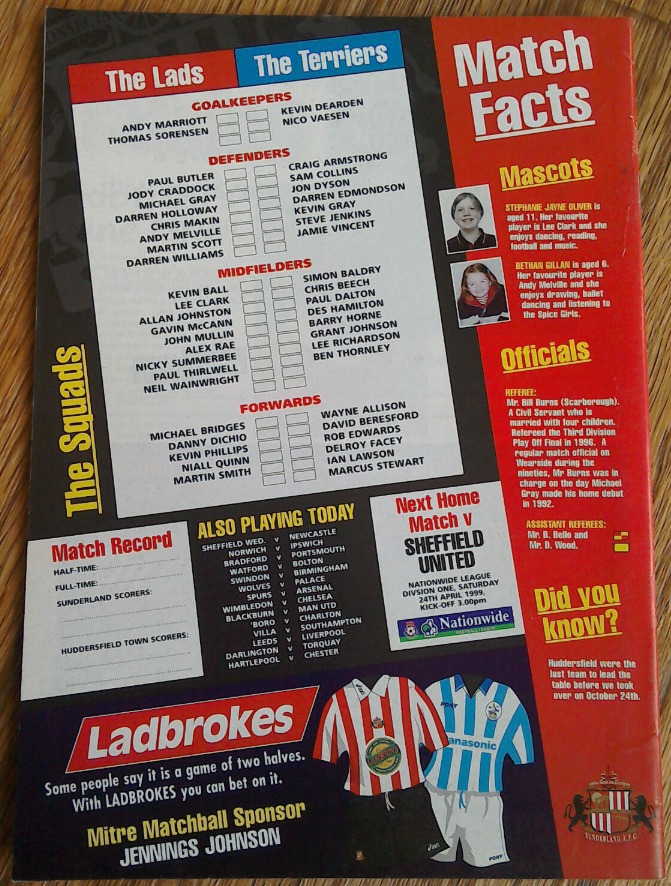 It didn’t distract the big Irishman too much though, as he got himself on the scoresheet on a successful afternoon for the Black Cats in front of a packed crowd of 41074, at the then relatively-new Stadium of Light.

Huddersfield, by this point, had completely thrown away their chance at gaining promotion, having actually occupied the top spot in the table before Reid’s side overtook them in October. Sat firmly in mid-table with 56 points, Peter Jackson’s men were well outside the play-off spots and having seen their season fritter away, a jaunt north to take on the Sunderland machine probably wasn’t high on their wish list at that moment in time.

“Some of the stuff we played was outstanding. There was no sign of any nerves from my players. They are just going out and producing performances like that.” — Peter Reid, April 10th 1999

The Lads started in full control of proceedings, and aimed to get the three points wrapped up as early as they could - though, despite their dominance, it wasn’t until the 28th minute when they took the lead.

Having brought down Lee Clark’s cross on his chest, Quinn battled off two Huddersfield defenders before unleashing a shot at Nico Vaesen that was too hot to handle, evading his grasp to bobble over the line - just - to put Sunlun one-up.

The second and final goal of the afternoon arrived just four minutes before the half-time break, as Allan Johnston connected with a well-weighted header from Kevin Phillips on the edge of the box to unleash an unstoppable drive into the bottom corner of Vaesen’s net.

Sunderland saw out the game in a controlled manner, securing the three points to extend our unbeaten run to 12 matches, perched comfortably right at the top of the table, on course for a record points tally should our form continue through to the end of the season (spoiler: we broke the record).

Game over then, and job done - onward we went to Bury in order to hopefully claim the hard-earned promotion that the side were cruelly robbed of just eleven months earlier at Wembley, against today’s opponents for Sunderland, Charlton Athletic.

Having picked the National winner and scored an important goal that set us on our path towards success, Niall Quinn can’t have had many better days than that in his career!

Make Your Case: Is Ravel Morrison a player that Sunderland should possibly take a gamble on?