Marc McNulty has merely outworked his main competitor for his spot in the side and, in turn, has shown himself as a valuable asset to a team lacking in attacking confidence right now.

Share All sharing options for: Electrifying! ‘Sparky’ Marc McNulty is reminding Sunderland fans what a good striker looks like

Few eyebrows were raised around Wearside when Sunderland, seemingly out of the blue, completed the unheralded loan signing of Reading’s Marc McNulty just three weeks ago.

The Scotland international arrived at the club on the back of an unsuccessful spell with the Championship side, though intrigued onlookers did note that his spell with the Royals was wedged either side of fruitful stints with Coventry City and latterly Hibernian, the club who were Sunderland’s main competition for McNulty’s signature this summer.

At the time, I interviewed followers of all three clubs in a bid to garner as many views on Marc as possible as I wanted to try and find some reasonable ground with which to form my opinion on the player we had just signed.

Courtney Friday from the Reading Chronicle was fair on McNulty, despite the fact his spell there was hugely unsuccessful. Edinburgh News Sport writer Joel Sked spoke glowingly of McNulty’s abilities and said Jack Ross ‘could have a real gem on his hands’, whilst Coventry fan George Baker made no bones about the fact that he thought Sunderland had pulled off a tremendous piece of business in signing a man he referred to as a Sky Blues ‘cult hero’.

Overall I felt relatively happy with the deal based on my three conversations. Despite the fact McNulty had failed at Reading, Courtney was keen not to write off McNulty based on his spell at the Madjeski Stadium. George and Joel had both witnessed McNulty successfully scoring goals in their teams and felt he had all the tools to be a hit at Sunderland, and that almost felt like enough. Provided he was given a chance, it seemed likely that McNulty was going to make a good first impression at our club.

And, without shadow of a doubt, he’s done just that. He bagged a hattrick in a behind closed doors friendly with Hartlepool which led to him starting against Oxford, where he worked hard and for me stood out from his teammates in a performance where most of the Sunderland players were underwhelming.

In the first half in particular he harried and harrassed the Oxford defenders, and despite the complete lack of creativity from our team he managed to fashion a couple of good chances for himself after some hard work off the ball.

His performance down at Ipswich last weekend played out in a similar vein. His persistence put Luke Chambers under some uncomfortable pressure which led to him dispossessing the experienced defender in a critical position, putting the ball on a plate to Lynden Gooch who duly scored the much-needed Sunderland equaliser.

Then, at Accrington, he was at it again. He scored Sunderland’s opener, linked up brilliantly with Aiden McGeady before thumping a shot off the underside of the bar, and then grafted hard on the right-hand side of the pitch late in the game to grab an assist for Charlie Wyke’s close-range clincher.

Immediately the words of the Coventry supporter I spoke to came back to me - McNulty has a point to prove at Sunderland, and it’s that what is inspiring this ambitious striker to putting in the extra effort that you sometimes require when the rest of the team aren’t necessarily firing on all cylinders.

If your striker acts as a link man between himself and the other attackers, you have moments like the one we saw at Accrington when McGeady unselfishly played McNulty in behind for his chance which led to him hitting the bar. How often can you say you’ve seen a Sunderland striker get into those positions since Josh Maja left?

There was a glimpse of things to come when McNulty played in Wyke for his goal, too. The big man/little man partnership is one of the most tried and tested tactical methods in football, one perhaps largely consigned to the days of yore, yet I can’t help but feel that Sunderland’s best chance of successfully scoring goals this season will be in pairing Charlie and Marc together going forward.

I find it hard to criticise Wyke right now - he featured sparingly in pre-season, picked up an injury and only made his first appearance in the first-team when he came on at Accrington and scored.

Will Grigg, on the other hand, played in all four of Sunderland’s pre-season games, started against Oxford and Accrington, came off the bench against Ipswich - yet worryingly has scored zero goals in each of those seven games.

He hasn’t even had a shot on goal in our three games so far this season, in fact, and hasn’t got himself anywhere nearly as involved on and off the ball as McNulty has - just take a look at the amount of times both men were involved in our play against Oxford in the stat maps below as an example. 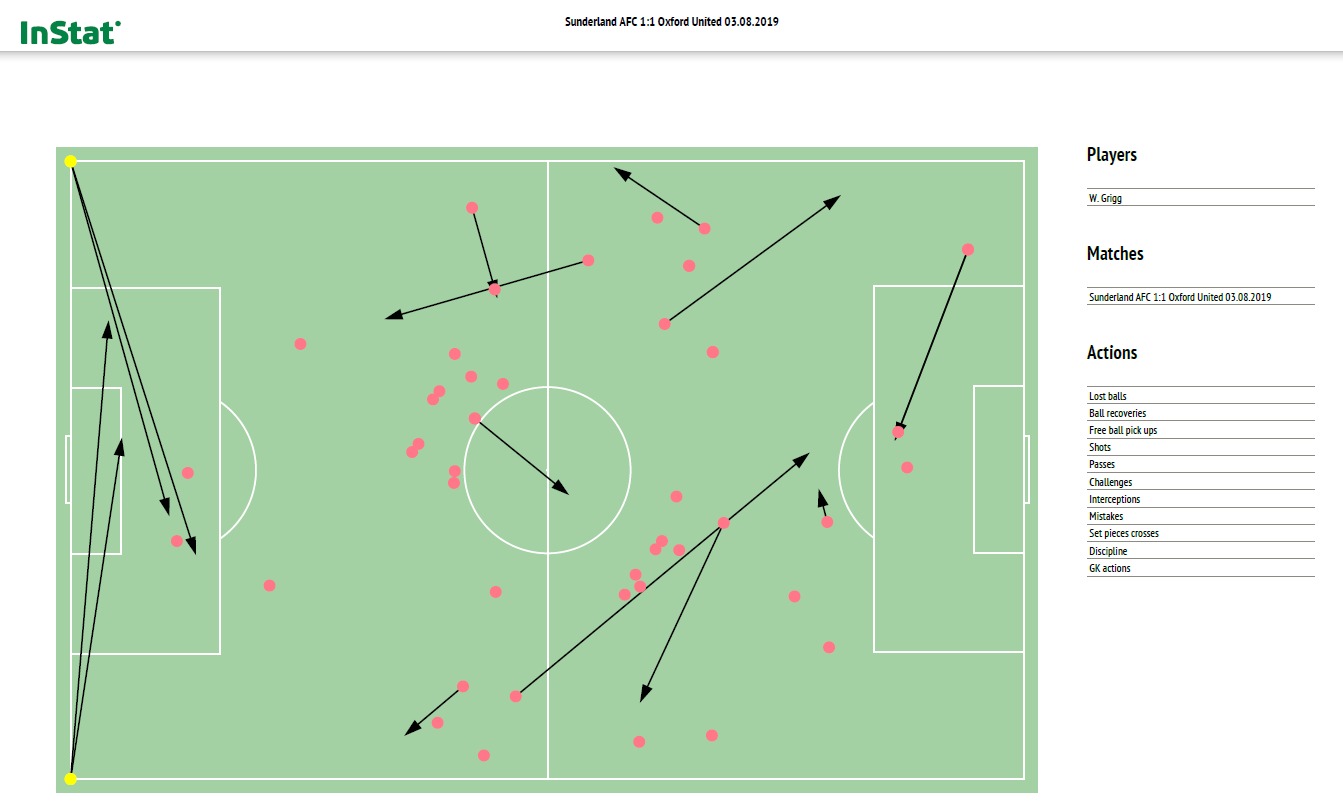 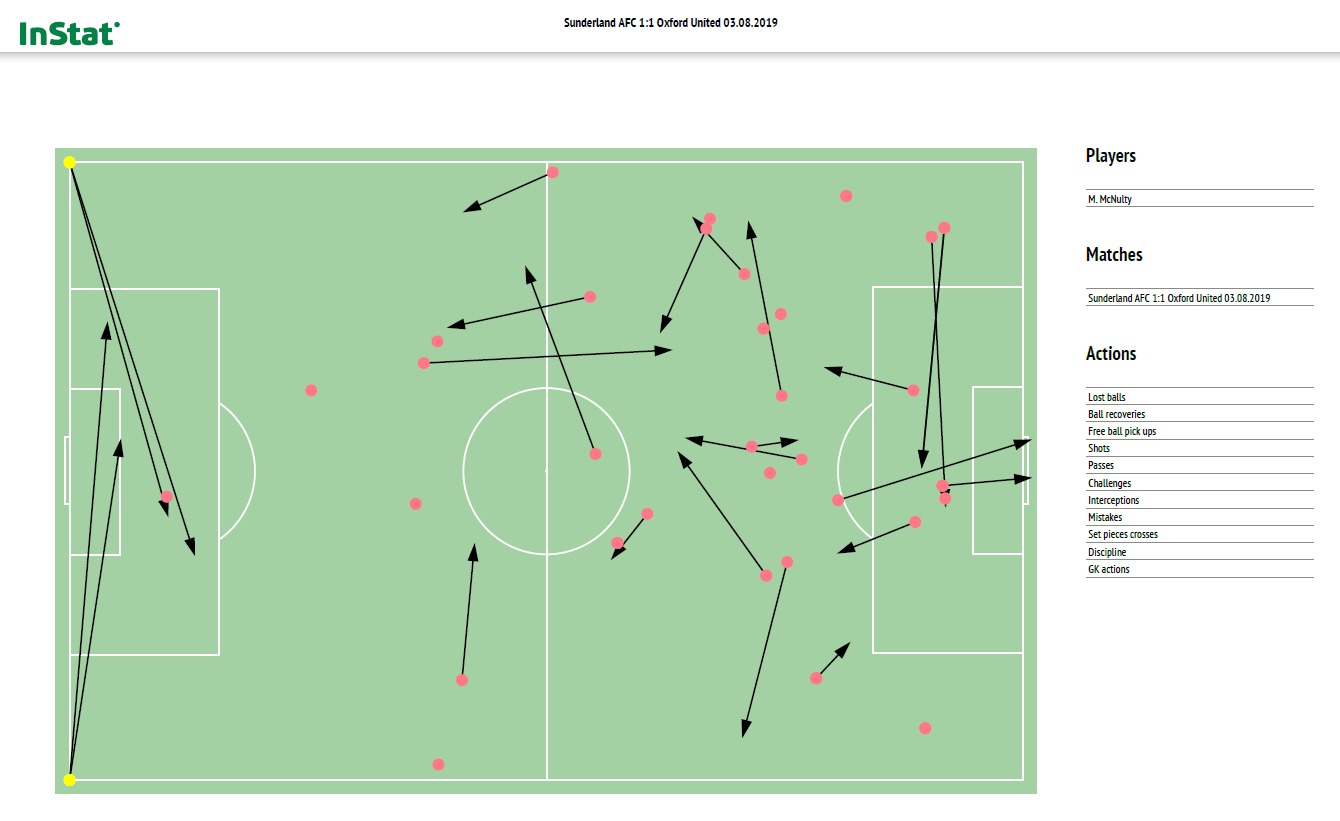 Despite the flat, underwhelming performance of the Sunderland players on the day, McNulty was far more involved in all aspects of our play and was unfortunate not to get a goal on his debut.

Logic would tell you that the more you involve yourself in the play all over the park, the more likely you are to find yourself in situations where you can either score, or provide assists for others. And whilst Grigg’s role isn’t entirely the same as McNulty’s in the side, the positions which both men appear to take up on the pitch indicate that McNulty’s touches of the ball come simply as the result of his persistence and willingness to stay involved.

That said, the argument that the service to our strikers is incredibly poor holds some weight. Sunderland’s game-to-game xG statistics are frequently low and point to the fact that this team does not create nearly enough chances to carry their goalscoring form over a sustainable period - something that was first highlighted last season by commentators like NTT20 pod’s George Elek when Josh Maja’s chance conversion rate was perhaps masking over the severe failings of Sunderland’s attacking blueprint.

After Maja left those trends worryingly continued, and whilst we impressively managed to score in almost every game last season, we often did so whilst creating very few chances from open play.

Will Grigg’s scoring record at other clubs - Brentford aside - suggests that he’s deadly in front of goal, but so far at Sunderland we’ve just not seen it.

And as each game passes by without Will scoring a goal, his confidence seemingly worsens - he’s missing chances you’d expect him to put away with ease, and his work off the ball is lacklustre at best.

There have even been accusations of a ‘lazy’ attitude, with some fans even believing that Grigg plays like a man who doesn’t want to be here. Others suggest that he’s certainly worth persisting with, and that the team simply has to find out a way of playing that suits Grigg’s style of play to get the best from him.

I’d argue, however, that the early performances of Marc McNulty have completely blown that theory out of the water. It’s clear and obvious that this team plays better as an attacking unit with McNulty linking play, chasing down defenders and working hard out wide to provide chances for others. In doing so he’s pushing the team further up the park, he’s bringing others into the game and he’s making Sunderland’s attack more potent.

McNulty has merely outworked his main competitor for his spot in the side and, in turn, has shown himself as a valuable asset to a team lacking in attacking confidence right now.

Will Grigg either has to sh*t, or get off the pot. It’s as simple as that.