Our slightly excitable headline comes with a justification - all four of our Roker Report wannabe Sunderland managers have steered the Lads to League One promotion success. Over to you, Mr Ross... ahem.

Yes that’s right, Sunderland are back into the Championship at the first time of asking. After a good March, April continued in the same vein with comfortable wins against Rochdale and Coventry setting up a game with Doncaster where a win would seal promotion.

The game against Donny was tighter, but a win was all that was required - and Charlie Wyke’s last minute winner sealed the win, and promotion.

A disappointing ‘after the Lord Mayor’s show’ performance in a 2-0 defeat at Peterborough has made the prospects of finishing above Barnsley and winning the league unlikely, although a win against Portsmouth in our final home game (thanks to Marcus Maddison’s 95th minute goal) means that Barnsley sit two point clear at the top of the table, with a much better goal difference. Only a win against Southend and a defeat from Barnsley in their last game will secure the league title.

WE’RE ON OUR WAY BACK!

As April draws to a close, two things are certain: Sunderland are the winners of the Checkatrade Trophy; and (probably less importantly) we’ll be playing our football in the Championship next season!

A run of eight straight wins spanning over March and April, with a solitary draw to end the penultimate month of the season top of the pile, saw us move three points ahead of near rivals Barnsley; a team who have been on top form this season.

Chris Maguire was extremely influential in this unbeaten run which saw him bag 6 goals in April, only to be pipped to the Player of the Month award by young Barnsley forward Cauley Woodrow (7 goals).

While I only need a point to secure the title, I am torn between starting my strongest team and playing some of the young fringe players who are developing into serious talents. Whether it’s in first or second, I’m just happy we’ll no longer be in the third tier.

League One? Completed it mate.

April proved to be a cracking month as the lads won five on the bounce hammering Coventry and Rochdale three and four nil. We secured promotion away at Peterborough, before clinching the title in a sold-out Stadium of Light beating Portsmouth 1-0.

Our brilliant form earned me the Manager of the Month award as I managed to achieve an unbeaten record throughout the season at home. I am thrilled to have managed to gain promotion at the first attempt as I believe many players would have asked to leave, plus I gambled my job to spending my entire transfer budget.

Once again, I cannot not mention Charlie Wyke.

The target man bagged seven goals in five matches across April winning the Player of the Month award. He has now scored 29 goals under my management and has most definitely been my most effective player this campaign.

Josh Maja has been somewhat a forgotten man featuring heavily from the bench.

In addition to Wyke’s form, I expect Duncan Watmore to win the Player of the Year award at the club. The winger has been integral this year scoring eleven goals and providing twelve assists, a higher goal involvement that any midfielder at the club. As a reward, I have offered him a new three-year deal on higher wages to persuade him to stay.

Ahead of the Southend game, I plan to rotate the squad and provide game time to some younger players who have not managed to obtain regular minutes. The likes of Denver Hume, Bali Mumba and Luke Molyneux would relish a chance to get ninety minutes.

If the lads draw or win the match we will achieve a magnificent total of 100 points for the season. Southend need to win to avoid relegation, so it could prove a highly interesting match!

So I have to start by apologising for my entry in March being absent because it was actually a very very successful month. Let me give you the headlines.

In March we managed to bring home TWO pieces of silverware. Firstly we wrapped up the league before April even began with a 3-2 victory away at Barnsley on March 12th that put us on 98 points and ensured that we could no longer be caught at the top. That was shortly followed be a hugely dramatic Checkatrade Trophy cup final against Oxford United where we surrendered a 2 goal lead in the 91st minute and saw the game tied at 2-2 before Oxford had the man who scored both of their goals, Samir Carruthers sent off.

Then in the 4th minute of stoppage time at the end of the game our corner was cleared only as far as Max Power at the edge of the box who hammered a strike into the bottom corner to win us the game.

Cue scenes of jubilation in my office as I cheered on a collection of pixels for a mickey mouse cup that isn’t even real. I did promise to win it though so there you go, its won. 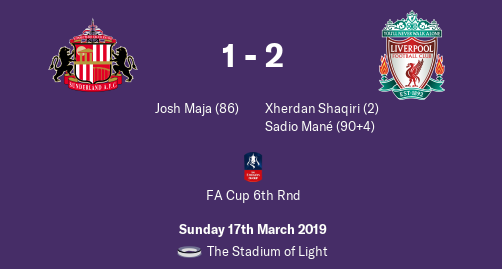 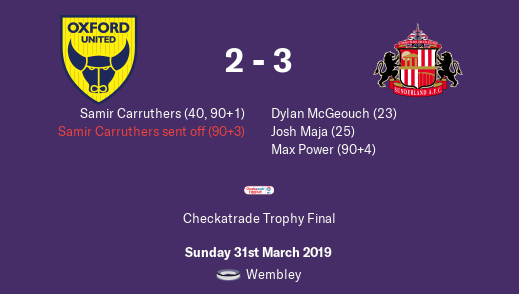 The agony and the ecstasy

The only downside to March was the fact we were knocked out of the FA Cup by Liverpool in the quarter final thanks to another 94th minute winner except this time it was Sadio Mane spoiling my fun and claiming a 2-1 victory for the reds.

So with the League and all of the cup competitions finished for the season April was a chance to play the youngsters and see how many points we could rack up. You could tell we had already won the title as the first two games of April were lost against Burton and Rochdale and even when we did start winning the performances were flat. Still, 3 clean sheets, 4 victories and 2 losses aint bad at all for a team with nothing to play for. We finished April on 116 points, a new League One record regardless of what happens on the final day against Southend in May.

Time to start planning for next season methinks.