Our budding football Managers have taken Sunderland into November, with mixed fortunes for each. Does Jack Ross have anything to worry about?! Probably not...

After a vast improvement in October, November continued in that same vein as I went the entire month unbeaten - winning 10 points from a possible 12 and advancing to the next round of both the Checkatrade Trophy and the FA Cup where we will play Wolves under 23s and Halifax Town respectively.

Despite these improved results, I have actually dropped down one place into twelfth but I’m now only three points off the playoff places and eight off the automatic spots.

Josh Maja had shone this month with six goals in seven games in all competitions, and Jerome Sinclair also made a telling contribution as he came off the bench to score the winner against both Barnsley and Accrington Stanley.

The aim for December is to win both cup games and try and advance into the playoff places for the first time this season - we have five league games this month so the points target must be at least twelve if we are to have any hope of achieving our aims this season, and if I am to even last the season as manager.

During December it is also wise to have one eye on the January transfer window, and an attacking player, a back-up goalkeeper and if possible a central defender are on my shopping list.

I simply cannot wait for the January transfer window!

Having Josh Maja, Jerome Sinclair and Lyndon Gooch injured throughout November proved fatal as I struggled for goals within my League One fixtures. In some fixtures I had to place four defenders on the bench as I don’t have faith in any of the reserve forwards. Charlie Wyke and Chris Maguire did contribute goals as opposed to Duncan Watmore, who was well off-form.

Although I have the best defensive record in the league, I’m still finding my league fixtures are too close. This is mainly down to the lack of goals coming from my four attacking midfielders - Watmore, Gooch, McGeady and Honeyman have just four league goals between them. This is becoming problematic as when for example a Josh Maja is injured it leaves a void. I did manage to put four past Wycombe but that was largely down to the form of my best performing player, King Maguire.

My excellent cup record continued as I managed to win away at both Swindon and Carlisle with weakened teams. Due to my ongoing injury crisis I played many fringe players such as Glenn Loovens as well as handing a debut to Jack Bainbridge who was steady. I drew Cambridge away in the FA Cup with Bradford visiting the SoL in the FA Trophy. I will have need to pray I do not suffer anymore injuries to any of my attackers as I have seven games across December.

It is integral I stay within touching distance of the promotions places in December so that I can give myself January to put my own stamp on this Sunderland team. Right now, there are too many positions we lack depth in. I would like to sell as much of the deadwood as possible so that I can add some real quality to the first team. 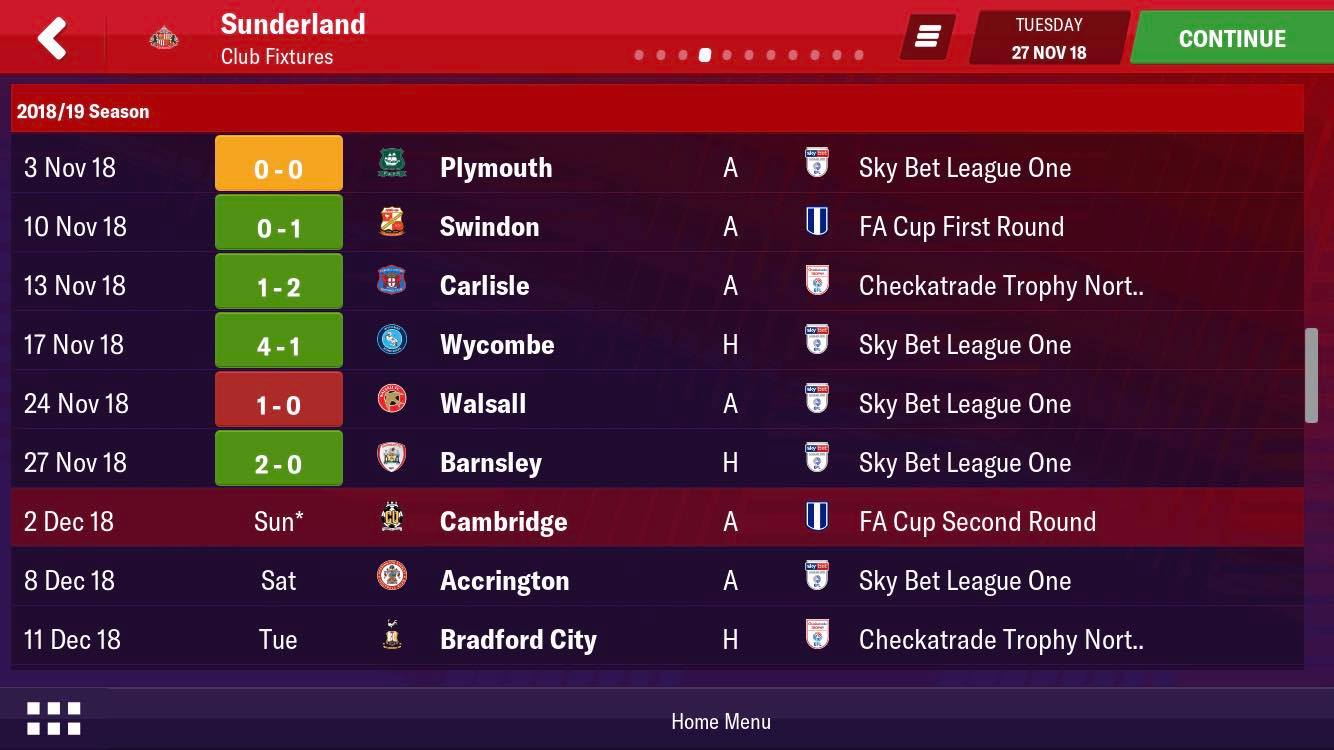 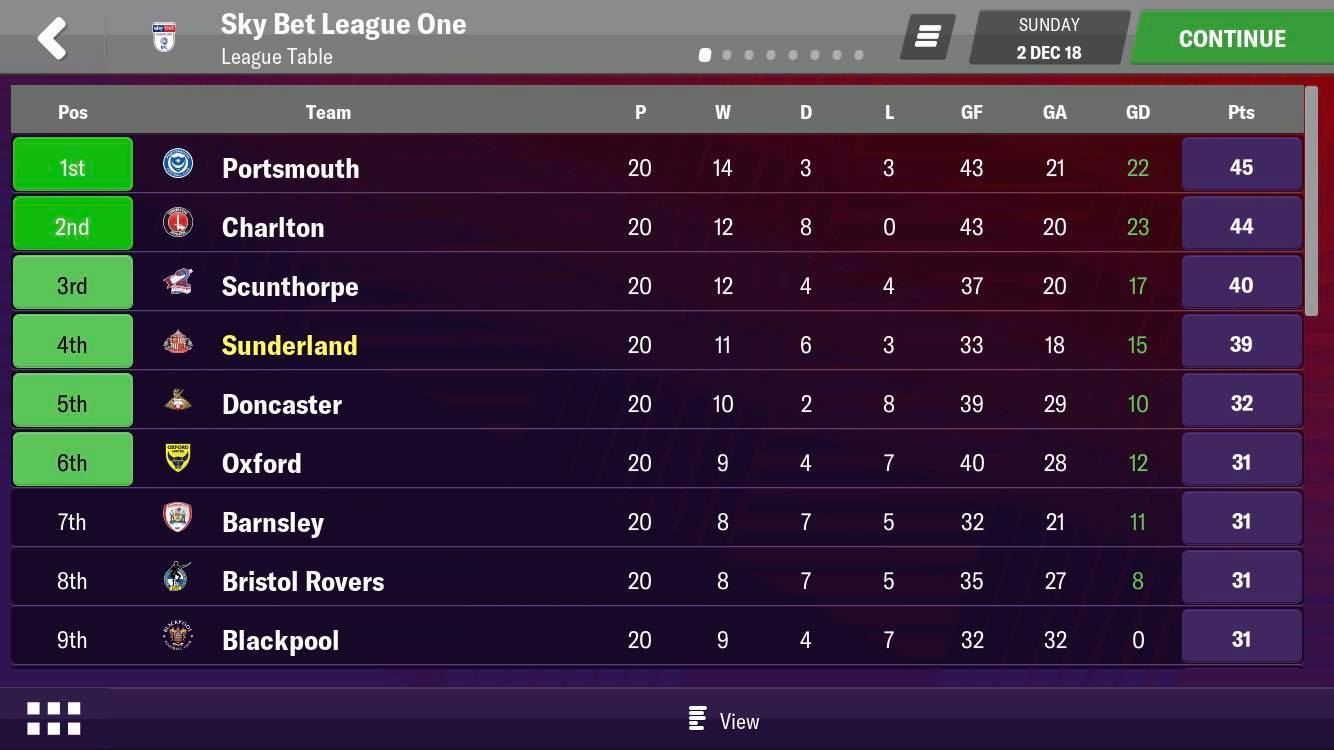 Well... November wasn’t the greatest month, especially in the league where I managed one win, draw and loss each in my only three outings. The game against Wycombe was scheduled for this month and, even though my squad was depleted, the last thing I wanted was an extra fixture being added to an already gruelling schedule.

Annoyingly, it was Wycombe who decided to postpone the game which now gives me eight games in just four weeks.

My disappointing league form has left me sitting in fourth place, still in touching distance of the top two though with plenty of football still to be played.

Having been drawn away to AFC Telford and picked for TV coverage in the FA Cup First Round, the travelling fans and TV bosses may have been surprised to see the majority of my first team rested, giving opportunities to the likes of Jack Diamond and Bali Mumba, who both impressed with the former grabbing his first goal.

Fingers crossed these lads can perform again at the SoL against Macclesfield in the next round.

Checkatrade Alert! My final Group E game came against struggling Oldham with the lads running out 3-1 victors to set up a second round tie with Crewe. So far so good in the quest for Checkatrade glory.

As the January transfer window gets ever closer, it’s about time I start pimpointing which players I might add to my roster for the rest of the season, and with that transfer budget, don’t expecting minimal transfer fees!

Last week I was shamelessly accused of cheating by Jake Hannah so in order to restore integrity to the game and defend my good name I simply had to deliberately lose my first league game of the season. I decided that the away fixture against Walsall would be as good of a time as any so under my strict instructions the lads allowed our opponents to beat us 3-1.

November presented a strange schedule for me actually with 6 games in 3 different competitions against only 4 teams. We played Walsall again in the Checkatrade Trophy (we won that one) and Barnsley faced us in the 1st round of the FA Cup and as well as in the league (we won both of those). Despite picking up our first defeat of the season we’re still in a remarkably strong position at the top of the league, 8 points clear of Portsmouth in second with a game in hand over third-placed Peterborough. League One continues to be our b*tch.

On the injury front we’re still absolutely plagued. Oviedo ruptured his ACL so he’s out forever. Loovens is still down but should be back in December and basically every time somebody comes back somebody else goes down, its frustrating but its classic FM so I can’t complain. That meant Donald Love had to play centre back a couple of times too many and it lead to a distinct lack of clean sheets this month, when January comes around I know what I’ll be looking for.

Some of the stats from the season so far make for interesting reading. Top scorer so far is Charlie Wyke however he still isn’t a guaranteed starter due to his inconsistency but we get goals from all over the pitch anyway. Chris Maguire is averaging a rating of 7.41 and leads in the assists category with 6. My favourite stat though is without a doubt that Lee Cattermole is knocking out 92% pass completion from his new position as a regista. For context, if he was doing that in real life he would 10th among midfielders for pass completion in Europe and 24th out of all players. Lee Barry Busquets I’m telling you.