Discussing Coleman’s starting XI: Should Sunderland start utilising the wide-men in their ranks?

The transfer window has shut and Chris Coleman now knows what he has at his disposal. How does he make the best use of what he has? Today we analyse Sunderland’s midfield.

Share All sharing options for: Discussing Coleman’s starting XI: Should Sunderland start utilising the wide-men in their ranks?

In the last few games Chris Coleman has favoured two holding midfielders and a more advanced, creative or attacking player. This is a change from the formation built around Darron Gibson early on in Coleman’s reign, where a single holding player dictated the play with two energetic, midfielders ahead of him.

Will the Sunderland manager stick to the current system or revert to the former version? Or, with wins becoming more and more urgent, is it time to change altogether and play wingers?

Darron Gibson was starting to come into his own until injury curtailed his season. Whilst he will recover before May, the likelihood of him being match-fit and involved is unlikely, unless of course he recovers ahead of schedule.

Lee Cattermole has his critics - and, at times, deservedly so - but he showed elements of his old qualities in our win over Hull City in January. If he could find that kind of form for the run-in towards the end of the season we’d welcome that player with open arms. However, Catts seemed to fall back into his more recognisable Championship form as we were brushed aside by both Birmingham and Ipswich last week. A Jekyll and Hyde player this season, it’s a tough and risky call to keep him in the side.

Ethan Robson has emerged as an option from within our own Academy. Robson has been neat and tidy so far and he could be a long term feature in the Sunderland engine room, but asking the lad to be our sole holding midfielder would be a huge risk. Would Coleman be so brave, especially in the face of receding options?

Paddy McNair is another who has struggled with injuries this season. Is he likely to play a part in the coming months? Perhaps he has a better chance than Gibson, but it all depends on his latest recovery plan and how desperate Coleman is when he’s available.

We do still have Jack Rodwell on our books, of course, and he did appear in the U23 game earlier this week (albeit as a central defender). Is Jack on the road to redemption or simply happy to take his £70k a week away from a baying crowd?

When fit, who would be your first choice holding midfielder?

George Honeyman has become something of a fixture in the side this season. I’ve seen divided comments regarding the lad, but whether you praise his work-rate or berate his lack of quality, what can’t be denied is George’s commitment and desire to the cause. When he’s been used in his favoured position - as the creative central midfielder with the freedom to roam and link up play all over the pitch - he’s been effective, as we saw against Hull. He’s weighed in with a decent amount of goals for a midfielder and has the ambition to reach double figures.

The alternative to Honeyman is Jonny Williams. Clearly a talent, the issue is he’s missed a lot of the season; the trick is getting him match-fit and keeping him so. He’s the only midfielder we’ve mentioned so far that’s on loan, and that may bring another challenge. Williams’ presence would come at a cost to another - probably Ovie Ejaria, as he would naturally be the alternative in a more advanced midfield role. That’s not to say they couldn’t play together, but it would mean a change to our central defence or striker position, as we can only have five loan players in the match-day squad.

Lynden Gooch has been in and out of the side for a couple of seasons now but hasn’t truly nailed down a regular spot. He has been asked to play a variety of roles, from winger to central striker to no.10, to advanced midfielder. Perhaps his best role is yet to be seen, but I’d argue he has the legs to play an attacking midfield role from where he can make runs in support of the attack and drop deeper into the bowels of midfield when required.

Ovie Ejaria made his debut against Ipswich at the expense of Honeyman and performed well in the first half an hour. As the second half wore on he faded, but this is a different stage to an U23 game. He probably showed enough to suggest he can be a talented box-to-box player who can link midfield to attack, given a run in the side. The loan system may determine how often we can use him as he will be competing with Jonny Williams, but he offers something different to our other midfielders.

Elliot Embleton is an Academy prospect who has been involved in the squad this season and has made his debut from the subs bench. A player who stands out in most U23 games, he has the drive, skill and ability to become a truly excellent attacking midfielder. One we may have to watch out for, but probably not a solution right now.

Creativity and drive from midfield: who’s your top pick?

True, we haven’t used wingers often under Coleman, but if we switch to a back four or play one up top, we need to attack with width across the middle and deploy players who can carry us towards the opposition goal.

Aiden McGeady clearly offers something in creativity and a goal-threat, but Coleman has used him sparingly so far. A change in formation would bring him back into the fold in his favoured position and, heaven knows, we could do with his goals.

Coleman has hinted he’ll operate as a forward but Kazenga LuaLua has the trickery and skill to operate from wide positions. Kaz could complement McGeady on the opposite flank and bring greater potency to our attacks. Perhaps having more attack-minded players providing our width will pose a greater threat to opposition defences than wing-backs?

Callum McManaman was brought to the club with the promise to get supporters out of their seats. So far, that hasn’t been the case, but maybe it’s down to the current system. Should Coleman change tactics and seek to play with wingers, McManaman may perform far better in his favoured role.

RR Selection: Changing to wingers may be a step too far as Coleman has shown how he favours three in the middle, with wing-backs offering the width, so we’ll stick with this system in making our selections.

Playing an openly attacking midfield is, perhaps, a gamble, but wins are essential. Robson hasn’t played the holding role alone, but maybe we need to be adventurous.

Ahead of him, we’ve added a creative player and an attacking, box-to-box midfielder. We could start with both Williams and Ejaria in those roles, but that takes two loan places from the five available. If we assume Camp is our no.1, it’s actually two from four. Playing them both means we either drop a central defender or leave Ashley Fletcher out of the attack. Given Williams’ injury record, though, perhaps Honeyman is a more likely starter.

As a box-to-box midfielder, we’ve included Ejaria. He’ll have to work hard to support Robson, whilst getting us up the pitch quickly. It’s a big ask, but one his youthful energy may be suited for.

There will be games we can’t be as ambitious and need to be more pragmatic and defensive. In that case, it’s likely Cattermole would have to partner Robson. Hopefully McNair can offer an alternative if he recovers sufficiently to play this season.

Ahead of two holding midfielders, we need a patient, creative presence. Williams may be the best choice, but again this could be interchangeable with Honeyman or Ejaria. 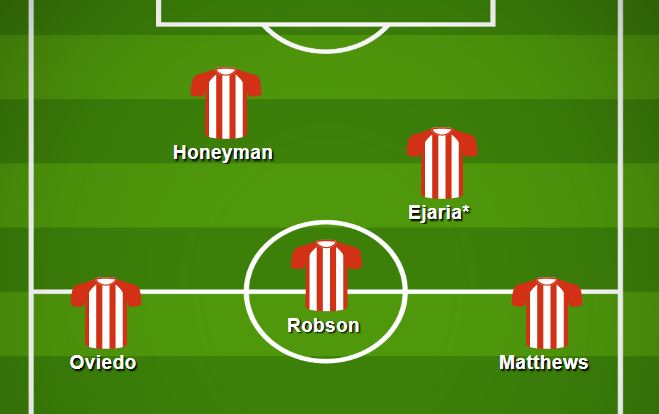 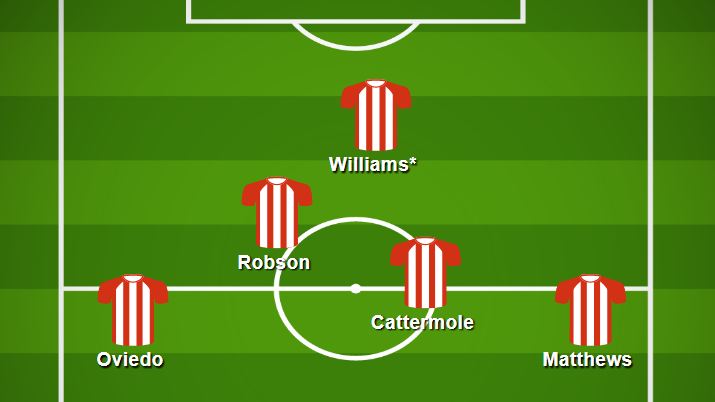