Four of our writers go head-to-head to see who could replace Jack Ross as manager of Sunderland when Scotland come calling!

With Jack Ross doing a fine job thus far in League One, we thought we’d see how we fared when tasked with taking the reigns in Sunderland’s second ever season in the third tier.

Throughout the series, we’ll be following the progress of four of our writers to see which of them can steer our side back in the right direction... and which of them fail miserably.

With Phil, Jake and Chris sporting the PC version of the game and Matthew acting as our resident mobile gamer, our management skills - or lack thereof - will be put under extreme pressure throughout the season.

The initial targets set by Stewart Donald were to win League One, the third round of the Carabao Cup and the fourth round of the FA Cup. However, I am aiming for a cup run so hope to either win the Checkatrade Trophy or get to the quarters of one of the other cups.

To start off I hired Richard Hill to fill the vacant position of Director of Football, and immediately set him the task of securing new contracts for Maja, James, Embleton and Hume who all signed on until 2020. Hill failed to tie down Gooch, Honeyman, Robson and Matthews so I’ll try myself once the season gets underway.

In terms of tactics, I’m going to look to play an attacking game and went for a “Control Possession” tactic with a few tweaks and thought it best to go with a 4-2-3-1 for the most part – since Sunderland’s squad depth seems build for this. It includes one Ball-Playing Defender, a Deep-Lying Playmaker on Defend duty to act as a pivot, and a Ball Winning Midfielder on support.

The two Inside Forwards are instructed to stay wide to make the pitch big before dribbling inside. Up front I’ve gone with a Deep-Lying Forward on attack duty, although this is designed for Maja so may change depending on who starts up front. I also set up a counter-attacking tactic in 4-4-1-1 and a more attacking option in a 4-2-4 formation.

Pre-season went better than expected, with wins over RB Salzburg (1-0) and Brentford (4-2) the highlights. McGeady and Wyke both impressed enough to push for a place in the starting line up on the opening day.

The major downside of preseason was an injury to Sinclair just before the final pre-season game, ruling him out for 5-6 weeks. Adam Matthews was also a casualty in training, which meant he only played the final game of preseason, and both he and Bryan Oviedo (unfit after returning from the world cup) will play for the under 23s until match fit.

Disclaimer: I have a history of being genuinely awful at this game and if I’m sacked by Christmas, don’t be surprised!

Anyhow, looking at the sheer quality of our team in relation to League One, it was clear that winning the league was imperative, echoed by both the players and new owner Stewart Donald. While the league is definitely a priority, I’m expecting this to be my only shot at the Checkatrade Trophy, so I might as well prioritise that over other Cup competitions as I aim for a domestic double.

I reckon the likes of Lynden Gooch and Chris Maguire could be vital components in my Sunderland side after impressing in pre-season, so I’ve set up the team to play a 4-1-4-1 DM Wide formation and selected ‘Wing Play’ as my preferred playing style. These two should be able to feed Target Man Charlie Wyke with chances aplenty each game.

I’ve managed to fit in all three star midfielders on paper, with Catts sitting behind Max Power and Dylan McGeouch in the centre of midfield. While Bryan Oviedo regains full fitness after a Summer in Russia, the back four consist of: James, Baldwin, Loovens and Flanagan which should be pretty solid.

Pre-season went unbelievably well and I’m absolutely going to get carried away by some big results, in particular a 5-2 win away at Carrow Road. In the 7 victories achieved prior to the Charlton opener, we managed an aggregate score of 26-6!

The one major disappointment is a twisted ankle suffered by defensive midfielder Lee Cattermole midway through July, leaving him unfit to play for the first couple of games. Rather than relying on the likes of Luke O’Nien or Bali Mumba to replace Catts in front of the back four, I’m drafting in George Honeyman from his number 10 role until Lee is back in the fold.

With this save I want to get Sunderland playing expansive, attacking football and develop younger players into the club’s best players as quickly as possible. As a result I fully expect to struggle for the first part of the season. The other key feature of my save is that I’m training Cattermole to be an effective regista, a long shot I know but if it comes off then I’ll have League One’s answer to Fernandinho: Lee Barry Fernandinho.

Otherwise the plan for the season is to win everything (duh). Although I may start slowly, this team will eventually get going, and once they do they’ll prove too much going forwards for League One. In the cups I’ll probably rotate, but you better believe the Checkatrade Trophy is coming home.

My starting eleven at the moment is simply made of the highest rated players in each position (but I’ll be bringing the youngsters in sooner rather than later) in a 4-1-4-1 DM wide playing a slight variation on the Veritcal Tiki Taka. My front three is Maja, Maguire and Gooch with Lynden ordered to stay wide on the right and Chris Maguire given licence to roam as an inside forward. Maja’s potential in this game is impressive so I’ll be giving most of the minutes up front to him and eventually he’ll be well trained as a complete forward. The back four has Flanagan as a right wing-back, not a centre back like he plays for us in real life, and Loovens takes his place alongside Jack Baldwin.

There are two variations on this formation that I can use, one involves sacrificing a central midfielder to accommodate an attacking midfielder through the middle like George Honeyman and the other is pretty much the same thing except I throw Wyke up top alongside Maja as a target man in case of an emergency.

Pre-season was interesting, lost against Legia Warsaw 1-0 at the SoL in a game that kicked off at squints 9am! But my side responded by winning the next three games with an aggregate score of 22-7. The highlight being an 11-0 win over squints even harder Burgess Hill? 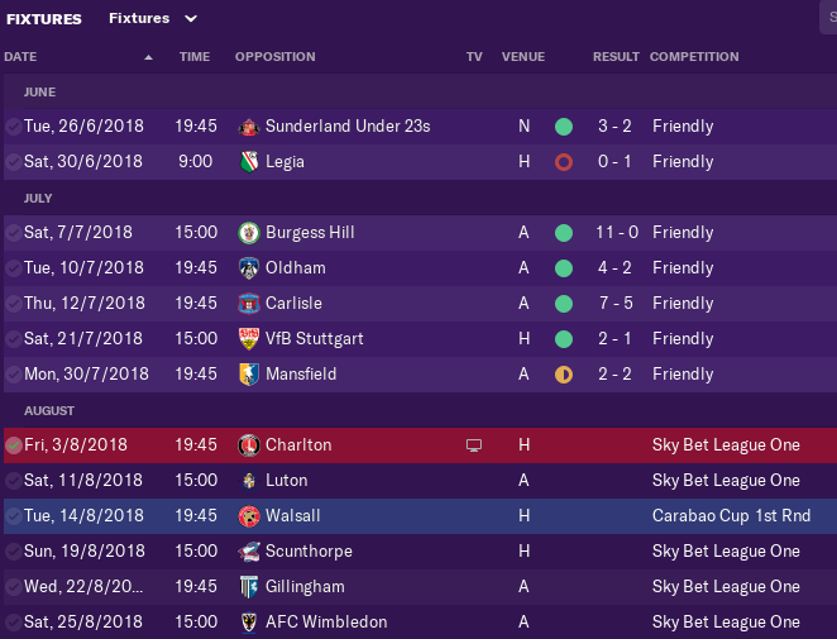 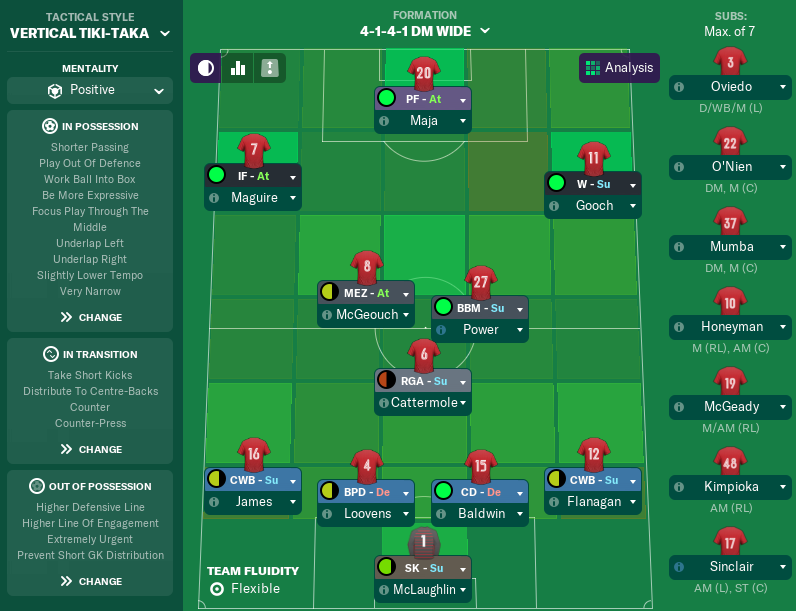 Getting Cattermole comfortable as a regista is the ultimate goal here

As the only participant using the mobile app, I think my experience will be less complex, but just as exciting and addictive.

Short term, I would like to win both League One and the EFL Trophy to create a winning mentality as well as to upgrade my player’s ability levels. My management focus will be on developing young players, so that I can create a system in which young players are being bought at low prices and then being sold for a sizable profit.

In terms of tactics, I have begun with a 4-1-2-2-1 formation with a focus on playing fast counter attacking football in which two inside forwards assist a lone striker (see image). Controversially, I have selected Don Love as a ball playing centre half, with Bali Mumba taking a starting place, ahead of the likes of George Honeyman and Max Power. I reinstated Lee Cattermole as club captain, although I doubt he will be at the club long term because of his staggering £30k a week wages.

I enjoyed a highly successful pre-season period, in which I only suffered defeat to Liverpool. Each club I faced was from a higher division, and I was very impressed with away victories at both Brentford and Wigan. Chris Maguire was my star player scoring, assisting and winning MOTM twice across the four fixtures. Aiden McGeady’s month-long absence proved to a blessing in disguise as I had originally picked him over the Scot.

My best achievement so far has been securing the trio of Josh Maja, Lynden Gooch and George Honeyman until 2021, which prevents any clubs potentially luring them away for a cut price. I will now be searching around to scout players who can enhance the squad in January; also, I need to determine who is surplus to requirements so that I can sell them to provide much needed cash.

Next time we catch up with our imitation Ross’, we’ll have an update on the side’s exploits in the league and cup.

Can our writers take their team back up the footballing pyramid? Time will tell.