Sunderland have today been strongly linked with a loan move for Wolves winger Ben Marshall, but is he any good? We sought out the views of our Wolves correspondents to get their opinion on what the former Leicester man could potentially bring to the table.

Share All sharing options for: VERDICT: Is Sunderland target Ben Marshall any good? Wolves fan & journo offer up their views

According to news which surfaced online this morning, Sunderland are very much interested in the loan signing of Wolverhampton Wanderers wide-man Ben Marshall.

The former England U21 man signed for Wolves just under a year ago from Blackburn Rovers, on deadline day, but hasn’t featured much since the start of this season and has found himself surplus to requirements for the current Championship league-leaders under the stewardship of highly-rated Portuguese coach Nuno Espírito Santo.

#SAFC leading the race for Wolves winger Ben Marshall. Plenty interested. Keen on Emerson Hyndman, but deal for Lukas Nmecha unlikely. He's thought to be injured, possibly for a month

The ex-Leicester City attacker stands at 6ft tall, and would add height, energy and genuine width down our right hand side - something that, despite having a number of options in that position, Sunderland manager Chris Coleman appears keen to address before the transfer window closes next week.

Marshall has featured only once in a game against Sunderland during his career - a 1-0 pre-season win for then-Championship side Leicester City at the King Power Stadium in 2012.

With the likes of Aiden McGeady and Callum McManaman struggling to get a regular look-in under Coleman it would be safe to assume that there’s a place very much up for grabs in the side for someone that can add dynamism, effort and physicality from wide-areas.

The absence of the pair from the starting eleven and off the bench at the weekend - coupled with this link turfing up so early in the week - may perhaps add credence to the rumour that has lingered for a while now, that Coleman doesn’t rate either of them particularly and would instead like to get a winger on board that works hard for the team at both ends of the pitch. Which, in fairness, is understandable since short-term the Welshman’s aim is to cultivate this squad and have grafters in every position.

But, what has gone wrong for Marshall at Wolverhampton Wanderers, and what could he potentially bring to the table if he does indeed sign for Sunderland?

We collared our old friends from the excellent Podcast, Wolves Fancast, and Birmingham Mail writer Joe Chapman to get their views on the winger in order to find out just what we’d be letting ourselves in for.

RR: So, Ben Marshall - Sunderland have been linked with a loan move for him this morning. Why hasn’t it worked out for him this season at Wolves?

WOLVES FANCAST: The Portugese connection - mainly because he has gone down the pecking order with our influx of signings. Brought in by Paul Lambert, he did really well for us but it seems he isn’t at the level or standard of the other players that we’ve have brought in recently. There won’t be any bad feelings if he goes - he’s just a victim of changed managers.

JOE CHAPMAN: Marshall arrived last January under Paul Lambert, with whom he worked at Blackburn. He featured regularly under the Scot, but quickly found himself on the fringes when Nuno Espírito Santo arrived. This wasn’t so much because of his ability, more the signings that Nuno made that overtook Marshall. Diogo Jota arrived, and Helder Costa and Ivan Cavaleiro were already at the club. It’s no disgrace for Marshall - he’s just been the victim of a very talented squad.

RR: It’s unclear what position we’d be looking for Marshall to play should he sign - we play with a back three, and though we have a number of right backs I’m not entirely sure that Chris Coleman is sold on any of them. Is he better as a wing back, or as just an out-and-out winger?

WOLVES FANCAST: Marshall is usually played as part of a front three here, so it’s likely he will be adapted as a winger rather than a wing back.

JOE CHAPMAN: Marshall played wide of a midfield four under Lambert, and that might be another reason it hasn’t really worked out under Nuno. The boss has adopted a very successful 3-4-3 formation this season, which involved Conor Coady deep as a sweeper and Barry Douglas and Matt Doherty as attacking wing backs. Marshall is able to operate as a wing-back, but with Doherty performing so well his chances have been restricted. He’s versatile, and can play along the right hand side in any capacity, but I’d wager that on the wing is where he is most comfortable and effective.

RR: There’s some reservation from Sunderland supporters about this particular rumour as we already have two wingers in Aiden McGeady and Callum McManaman who aren’t particularly fancied that are warming our bench. What would you say to anyone who isn’t sure about Marshall or what he could offer?

WOLVES FANCAST: We would say ‘be surprised’. Many of our fans were underwhelmed by him joining us. However, after a couple of games he showed his worth and provided a different dynamic to what we already had.

JOE CHAPMAN: He’s 26, has heaps of Championship experience and, rather importantly, has a point to prove. With a loan deal most likely, Marshall could leave Molineux, get minutes under his belt and maybe force Nuno to think twice. With no football on the horizon at Wolves, Marshall needs to leave and play. He hasn’t played since November, though, so match fitness might be something he’s short on.

Ben Marshall seems like the perfect fit for what it is that Chris Coleman is trying to achieve here at Sunderland, short-term at least.

He’s of good age, has plenty of experience in this league and would come with a point to prove having found himself out of the team at Wolves through no fault of his own. He hasn’t under-performed, been injured or suspended - it’s just that the current manager is enjoying success with the players that he’s got, and that’s it. 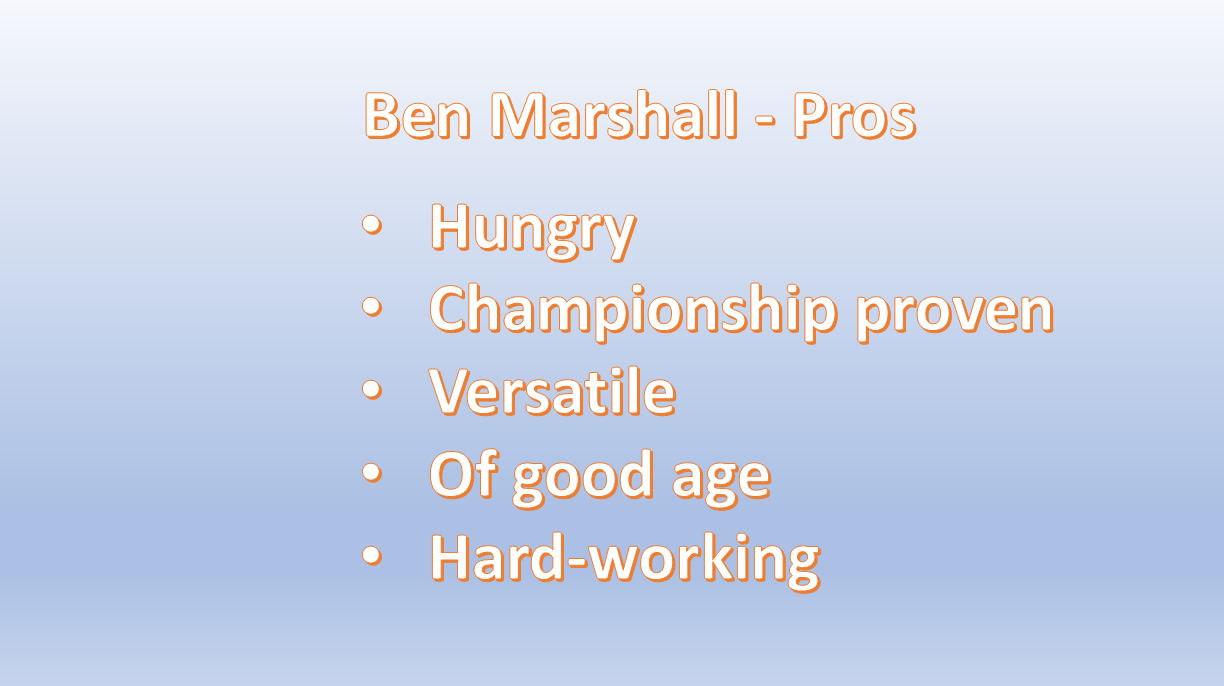 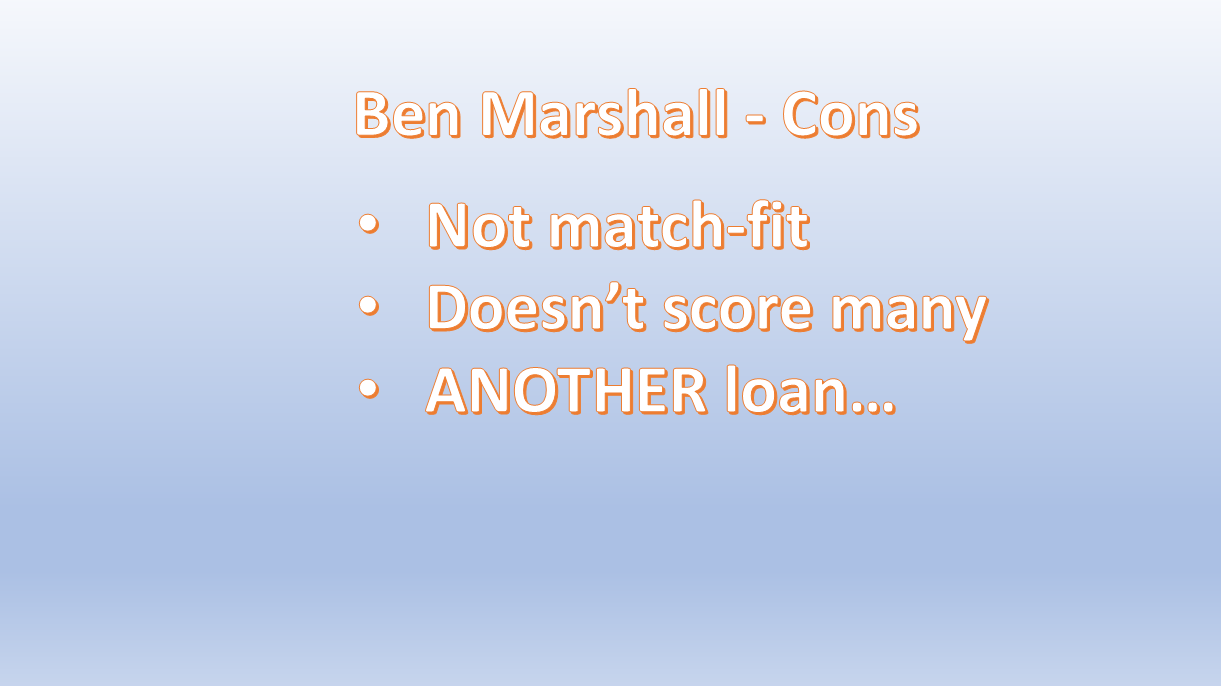 It’s a little frustrating that it’s another loan deal we’re apparently trying for - and, I know, we have no money, but there’s just that little bit more security and commitment when it comes to permanent deals. I sometimes worry that loanees don’t perhaps care too much for the fortunes of the club they’re playing for as they know they’re going back to their parent club at the end of it, but it is what it is and the only way we’ll realistically strengthen in this window is with the help of the loan market.

Gav Says: The fact that he’s so highly thought of at Wolves despite being out of the team is good enough for me. Fingers crossed we can pull this one out of the bag.