The introduction of youngster Ethan Robson to Sunderland’s side on Saturday for our win over Hull turned us into a more functional, free-flowing unit - a claim that the statistics most certainly back up.

Share All sharing options for: Ethan Robson made Sunderland infinitely better on Saturday - & here are the stats to back it up

Imagine the medley of nerves, exhilaration, and excitements that must have been coursing through Ethan Robson’s body when he found out on Friday that he was going to start the game against Hull City? The culmination of all his efforts over the years - starting his first league game. Hopefully the first of many.

The performance was strong and totally committed. The boys put a shift in - something that often this season could not be said about this side.

As I left the ground I reflected on the performance and felt that the introduction of Ethan Robson was absolutely crucial - he seemed tidy in midfield, won the ball back effectively, and very rarely gave up possession.

But what did the numbers say about his performance? I spent a good few hours analysing the brilliant whoscored.com, and was thrilled with what the statistics revealed.

One key component to Robson’s game was his athleticism and ability to consistently find himself in the right position - in both attack and defence.

With Lee Cattermole alongside him in a more limited role, the hope from Chris Coleman must have been that his two central midfielders would be able to secure the centre of the park against David Meyler and Sebastian Larsson. But did it work?

Here are two heat maps - one from our 1-0 victory over Fulham last month and one from the weekend’s game. Both heat maps show the positioning of our central midfielders in each fixture. 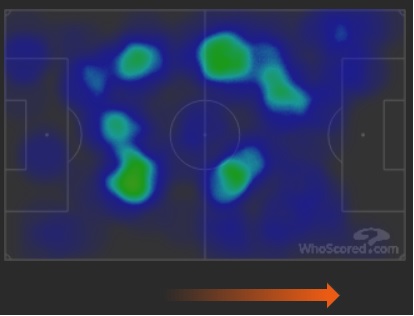 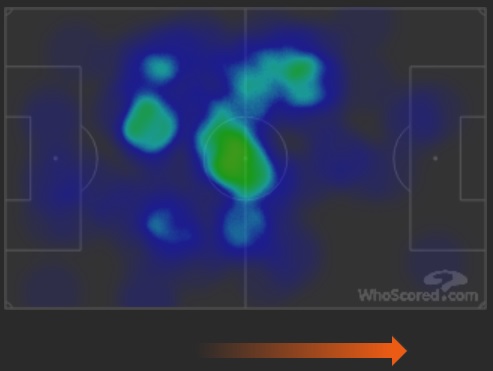 The Fulham game saw Darron Gibson line up next to George Honeyman and Lynden Gooch. What we can see here is the lack of activity right in the centre of the park. Now this was a game that we won - but were dominated with regard to possession.

If you compare that with the heat map from the Hull game - in which we lined up with Cattermole and Robson in a central two, we see that the Sunderland midfield dominated the middle of the park.

It was noticeable on Saturday how Sunderland’s duo had the better of the Hull midfield - with Meyler and Larsson struggling to put their stamp on the game. The two complimented each other well, and this helped us in other areas of the pitch, too.

Because of the dominance of our central midfield on Saturday it allowed George Honeyman to get forward more often. When Honeyman was playing with Gibson and Gooch he had to play a far more sheltered role because we relied on his energy and persistance in order to win the ball back.

With the inclusion of Robson alongside Cattermole, our attack-minded players were given license to move into dangerous positions without having to constantly worry about holding the middle of the park. The goal itself came from Honeyman drifting wide and playing a nice ball into the path of onrushing Joel Asoro - a great team move.

Our goal today was a fantastic bit of football like. Look at that for a team move. pic.twitter.com/6EYeMbSiKz

We relied heavily on our middle two to be sensible in possession - and both players had a passing percentage above 70%, which is fairly impressive considering how scrappy the game was at times.

Again, this enabled players around them to be more expressive, and helped the team generate meaningful attacks.

Robson played 22 passes forward, and limited himself to just three long passes in the whole game (all of which were successful). His 57 touches of the ball ranked him third behind Oviedo and Honeyman - impressive for a 21 year old making his first league start.

The impact of Robson and Cattermole operating as solid anchors in the middle of the park resulted in a very positive performance from George Honeyman, who knitted the midfield with the attack throughout the game.

If we look at the areas of the pitch that Honeyman made passes in we see him on the left hand side - generally linking play with Bryan Oviedo. That being said, Honeyman also drifted across the pitch and tried to become a focal point for our attacks - with the ball which led to Joel Asoro’s goal being the pick of the moves he made that day.

If we look at Bryan Oviedo’s pass map we can see the way in which Sunderland targeted their right back, who was given a torrid time by the lads down our left hand side all afternoon.

Oviedo has often marauded forward from his role as left wing-back, yet with a solid midfield duo backing him up he was given license to roam even more so than usual - it was an impressive performance from the Costa Rica international.

Subtly, bringing Robson into the side allowed Sunderland to move other players into the attacking third of the pitch. George Honeyman has received a fair bit of criticism recently, mainly because he has been playing in a position that doesn’t best suit the positive attributes he can bring to the team.

On Saturday, Robson and Cattermole provide the stability to allow Honeyman to move further up the field and cause problems for the opposition, thus benefiting both Asoro and Maja up front also.

This is where Robson really impressed me on Saturday. His seven tackles, 100% success rate in the air and three interceptions were vital to Sunderland’s eventual victory and all-round performance.

Every time there was a 50/50 ball to be won, Robson seemed to come out on top. His tackling ability was there for all to see and he knows how to put himself about physically.

But this also seemed to help Lee Cattermole, who had his highest tackle count of the season with six. It seemed on Saturday that Cattermole was back to his best - three shot blocks, three clearances and a brilliant yellow card picked up after he stopped a Hull counter attack in the dying stages of the game.

Some things cannot be proven with stats - but watching the game and the extended highlights the day after, it was evident to me just how much Robson grew in confidence as the game wore on.

I’m informed by those who have watched Robson on a regular basis for our U23s that he is, dare I say it, very much a midfielder in the mold of a Jack Colback - no thrills, but tidy.

Another aspect to Robson’s game which impressed me at the weekend was his willingness to get forward and make runs into the box. This team has been crying out for goals from midfield all season - with only Honeyman really contributing from the central area.

Not only that, but he’s a threat from set pieces.

If Robson can solidify his spot in the team between now and the end of the season, I’m confident that he’ll weigh in with his fair share of the goals.

And there you have it!

So... Is Robson The Future?

It’s early days, and it would be unfair to place too much in the way of expectation upon such young shoulders - but, from what I saw on Saturday, Robson made everyone around him better and will have certainly given Chris Coleman food for thought in terms of his team selection for the Birmingham game.

Robson allows us to be more balanced in our approach to games, and from Saturday's showing it would seem that we may well be able to rely on him and Cattermole to sit and shield the defence - something they were both excellent at against Hull.

I’m looking forward to seeing Robson develop this season. There will be tougher mental and physical tests ahead for the local lad, but he has the full support of his fellow fans who will be desperate to see him succeed.