Swansea managed to hold onto a 0-0 draw despite going down to ten men as the Black Cats remain in the hunt for their first Premier League win of the season.

Gus Poyet was forced to make two changes to the side that drew away at Turf Moor last Saturday. Will Buckley returned to first team action with Emanuele Giaccherini yet to recover from the ankle injury he sustained last weekend, and Billy Jones was handed his Premier League debut in the absence of Wes Brown.

The Sunderland manager’s injury concerns meant a re-shuffle was required. For the first time in four league games the back four was altered, Santiago Vergini filled in at centre-back to plug the gap left by Wes Brown, leaving the versatile Billy Jones to operate at right-back.

Connor Wickham lead the line for the Black Cats, and Steven Fletcher returned to Premier League action with a place on the bench.

As usual, Sunderland set up in Poyet’s favoured 4-1-4-1 formation.

Swansea have made an impressive start to the campaign in Garry Monk’s first full season in charge. The Swans have amassed a total of ten points in just five games, but despite this, traveled to the Stadium of Light on the back of two consecutive defeats at home to Southampton and away to Chelsea.

Wilfried Bony served a one-match suspension in mid-week, but the Ivorian failed to return to first team action and had to settle for a place amongst the substitutes. Bafetimbi Gomis was prefered to lead the line for the Swans, with Monk otherwise naming an unchanged side which featured the familiar Ki Sung-Yung in midfield.

Although Sunderland held the home advantage on Saturday, there was no doubt that achieving their first win of the season was going to be difficult against a strong Swansea side.

Poyet's footballing manifesto is a fledgling version of the one which has been implemented at Swansea in recent years forming the foundations of their rise to the Premier League, and the game would potentially be decided by which ever side took control of the play and executed their possession-based football to greater effect.

After two somewhat disappointing results away at Burnley in the Premier League and at home to Stoke City in the Capital One Cup, Poyet will almost certainly have called for a positive reaction from his players, and a performance to match.

Last week I highlighted Sunderland’s lack of fluidity, imagination and conviction in the final third. This week, we were so close to seeing a complete reversal in a fixture where the Black Cats thoroughly deserved to take all three points.

Right from the first whistle Sunderland’s work without the ball prevented Swansea from ever getting going and posing the attacking threat they usually offer, and this set the tone for most of the game.

In recent weeks we have seen Poyet’s possession-based approach almost completely nullified by heavy pressing high up the pitch, and it was this exact defensive game plan which benefited Sunderland on Saturday. It was clear early on that Connor Wickham was under specific instructions to close down Łukasz Fabiański, and there was an amount of urgency present throughout the Sunderland ranks to pressure every pass and limit Swansea’s time on the ball within their own half.

When in possession, Sunderland looked more threatening than they have done in any other game so far this season. Defeat to Stoke in mid-week has evidently led to a kick up the backside behind the scenes, and the Black Cats demonstrated a large amount of attacking purpose all afternoon.

Although the possession stats on the day show Swansea to have edged it, the game certainly didn’t reflect that fact in any way shape or form. Swansea were barley allowed a sight at goal in what was a very comfortable game for Vito Mannone, and Sunderland without a doubt were the more industrious of the two teams creating better chances and posing more of a threat.

In attacking areas Sunderland were finally showing signs of fluid and inventive movement, and were just one finishing touch away from an extremely impressive win.

Connor Wickham had what was perhaps the best of the Black Cat’s chances with a header that flew over the bar from close range, but despite not getting himself on the score sheet and ending Sunderland’s winless run, I think the 21-year-old had a very decent game.

The youngster was one goal away from a perfect performance. He held the ball up, distributed well in attacking areas and had the better of most of his aerial duels causing huge problems for Ashley Williams all game. 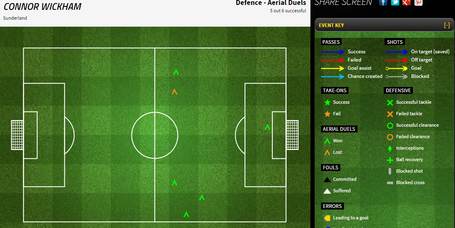 Obviously strikers are judged mostly on their goal return, but I believe Wickham deserves some patience. His goals last season almost single handily saved the side from relegation, and he proved that he holds the finishing instinct required to perform at Premier League level – it’s in their somewhere.

Sunderland continued to push for a goal right to the final whistle, but even against ten men the Black Cats failed to find a breakthrough. Poyet’s men were the better side on the day, but again the Uruguayan is left hunting for his first win of the season.

Another 0-0 draw, but a much more respectable one in terms of the quality of the opposition and the manner in which Sunderland performed.

The Black Cats demonstrated the kind of qualities in attacking areas that haven’t been present in recent weeks, and were remarkably solid defensively. Poyet will be pleased that there is now strong competition for places right across the back four and in goal. Aside from finding the back of the net, it was an almost faultless performance.

It’s unlikely that the Sunderland manager will be too phased by the lack of goals just yet, there were signs there on Saturday that the side hold a threat, and on another day it could have been a comfortable win.

Notable strong outings from Will Buckley, Sebastian Larsson and Patrick Van Aaanholt. And the introduction of Billy Jones into the side brought a great deal of balance to the Sunderland approach. The 27-year-old is a lot more competent in going forward than Santiago Vergini, and it’s a dimension that wasn’t present at right-back when the Argentinian was occupying the role.

I hope to see the Black Cats carry the level of this performance into the game against Stoke next week, and a win could well kick-start Sunderland’s climb up the table.

Sunderland 0-0 Swansea City: As It Happened