Sunderland played out a lackluster 0-0 draw against Burnley at Turf Moor as both sides continue in the hunt for their first win of the season.

Gus Poyet made one personnel change to the side that drew against Tottenham Hotspur last weekend. After a return from injury and some impressive cameos of late, Emanuele Giaccherini was handed his first start of the season replacing Ricky Alvarez with the Inter Milan loanee dropping out of the squad altogether.

The Sunderland manager had made it clear in a press conference earlier this week that he intends on utilising the squad he has available to him this season, and won’t shy away from any match-specific tailoring should he see fit. Connor Wickham had already been reassured of his place at the head of the Sunderland attack, but Poyet had kept the rest of his squad guessing as to whether or not they would feature in the starting XI.

While the goalkeeper and back four remained unchanged for the fourth consecutive Premier League game in a row, Poyet did feel it necessary to shuffle his midfield. The 46-year-old has begun to show a keenness in deploying Giaccherini through the middle, so Sebastian Larsson was pushed out onto the right-hand side while Adam Johnson operated from a familiar position on the left.

Steven Fletcher was again absent from the squad, leaving Danny Graham to take up a place amongst the substitutes.

Prior to Saturday’s game newly promoted Burnley had achieved respectable draws at home to Manchester United and away at Crystal Palace, but had been showing little sign of possessing the kind of goal scoring threat required to survive in the Premier League. A goal from Scott Arfield on the opening weekend of the season against Chelsea was Burnley’s only goal in their opening four games, and this is an area which Sean Dyche will no doubt have been looking to improve upon if his side were to pick up their first three points of the season against Sunderland.

Burnley would have to overcome their woes in front of goal without the help of last season’s top goal scorer Danny Ings. The 22-year-old was forced to miss out with a hamstring injury, and was replaced by Marvin Sordell. Veteran Matt Taylor was also ruled out with a niggling Achilles problem. 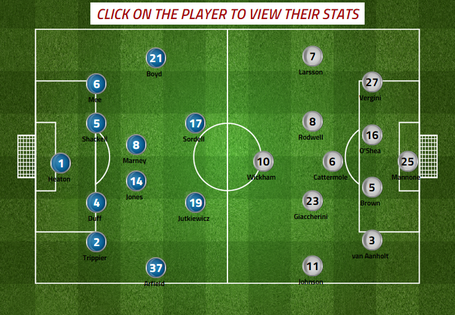 Sunderland have enjoyed a reasonably steady start to the season in relation to the start made under Paolo Di Canio a year ago, but despite some spirited performances the Black Cats up to this point were still without a win, and there’s no doubt that Poyet will have had this fixture earmarked as a prime opportunity for his side to pick up their first three points of the new campaign.

Sunderland found it difficult to implement Poyet’s brand of possession-based football against a rampant Spurs last weekend, but against weaker opposition such as Burnley, the Black Cats should possess the quality to control and win the game.

Sunderland are now in their eighth consecutive Premier League season, and there’s no question that Poyet will have demanded a performance to reflect that.

Right from the off Sunderland failed to impose any kind of dominance on proceedings, and Burnley’s early energy meant the Black Cats were struggling to find a rhythm and couldn’t control the game as Poyet would have liked. This set the tone for much of the afternoon in a fixture which on the most part lacked a great deal of quality, ending goalless due to both team’s inabilities in front of goal.

From a Sunderland perspective, the opening five games of the season have begun to highlight that a lack of conviction in the final third is the definite problem area in Poyet’s side, and this will form the main focal point of my analysis this week.

I’d been calling for Connor Wickham to spearhead the Sunderland attack in the early weeks of the season, but now the 21-year-old is occupying the role, I’m beginning to consider the fact that Sunderland’s attacking issues aren’t necessarily solely related to striker personnel. I stand by my opinion that Fletcher is incapable of playing as a lone forward in Poyet’s system due to his ball-holding and distributional deficiencies, and that Wickham is a much better fit for the role, but the youngster had a hard time of things last week and struggled on Saturday; which leads me to believe that the root of the problem could be elsewhere.

In possession and in attacking areas on Saturday Sunderland were too slow, too predictable and lacked imagination. It’s hard for a lone centre-forward to be effective when they are so isolated, and a lack of real support for Connor Wickham left the 21-year-old struggling to influence proceedings.

What was evidently part of the problem for Sunderland was the obvious lack of midfield support and quality movement off the ball. When looking at other teams that set up similarly to Sunderland and are of a similar ilk, it becomes clear just where the Black Cats are lacking in their attacking approach play – decisive movement, fluidity and incision.

Like Sunderland, Southampton and Swansea both operate with one physical centre forward tasked with holding the ball and facilitating the transition between defence and attack, as well as providing a goal-scoring threat. The difference between the Black Cats and the two sides in question (who have both been in fine form so far this season) is the influence their midfield has on the game. When I watch Southampton and Swansea play, I see fast passing, intelligent movement and an amount of freedom to roam from position to make it difficult for defenders to track their men – I am yet to see this from Sunderland so far this season, and I believe this is the problem which Poyet must address if his side are to progress and become a real force.

Now I don’t believe that these issues are down to the fact that Sunderland don’t possess the kind of players capable of operating in this style. Looking at the current midfield ranks; there’s the likes of Adam Johnson and Jack Rodwell - both of whom could arguably be placed up there with the best English midfielders outside the national team. Sebastian Larsson, who is of huge Premier League pedigree having played countless seasons in England’s top flight. Jordi Gomez who was schooled at Barcelona at youth level, and Emanuelle Giaccherini who is a winner of multiple Serie A championships as well as being a current Italian international. There’s certainly talent there. Which leads me to wonder whether perhaps Sunderland’s problem is stemming from inadequacies on the training pitch at coaching level – it’s possible.

There were however some signs on Saturday that Poyet was trying to apply a somewhat different approach to what we have seen in recent weeks. Giaccherini brought the side some much needed directness and attacking flair carrying the ball in midfield, and it was clear that Rodwell was under instructions to make his presence known inside the penalty area. On numerous occasions we saw the 23-year-old drift into goal scoring positions, but on the day it didn’t quite fall for him this time.

On a frustrating afternoon for Sunderland, Poyet’s decision to withdraw Giaccherini and Johnson in place of Jozy Altidore and Will Buckley in the final minutes proved a poor one. The Black Cats lost any attacking purpose they had been showing, along with their shape, and were perhaps lucky not to concede in the last fifteen minutes as Burnley capitalised and finished strongly.

A long-range effort from Patrick Van Aanholt that cannoned off the post and then onto the keeper only to rebound agonisingly wide capped a disappointing day for Sunderland, who remain in the hunt for their first win of the season.

Ultimately, the performance this week simply wasn’t good enough. However, the side again picked up a point and kept their first clean sheet of the season and like I said last week, when you play badly and avoid defeat then it’s generally a good sign that you’re on the right lines.

Nevertheless there is work still to be done, but I have enough confidence in Poyet that given time he will continue to impress at the Stadium of Light.

The Sunderland manager spoke of his intentions to utilise the squad he has available to him, and he has done, but one thing he doesn’t have at his disposal is striking variety. In Connor Wickham, Steven Fletcher, Jozy Altidore and Danny Graham Poyet effectively has the same player four times, and in my opinion he’s made an error not adding a different dimension to his striking options this summer – something which needs to be addressed in January.

Some positives from Saturday; Vito Mannone put in another strong performance, the Italian looked sure and alert and is excelling whilst Costel Pantilimon is forced to wait in the wings. Patrick Van Aanholt had a good game, and Jack Rodwell completed 90 minutes for the first time in his Sunderland career. The 23-year-old seems to be getting better by the game and I’m optimistic about his Sunderland future. He seems a very well balanced player who is adept with both feet. He had a good game at Turf Moor.

Onwards and upwards to Stoke City in midweek.

Burnley 0-0 Sunderland: As It Happened