A goal from Charlie Austin deep in first half stoppage time sealed a 1-0 win for Queens Park Rangers, and sentenced Sunderland to their first defeat of the season.

Gus Poyet made only one change to the team that drew 1-1 with Manchester United last weekend. Adam Johnson returned from illness in midweek to feature in the Capital One Cup victory over Birmingham, and the England international was immediately reinstated into the starting eleven replacing Will Buckley despite the latter putting in an impressive performance on his full debut.

As expected, the Black Cats set up with Poyet’s favoured 4-1-4-1 formation. Steven Fletcher was handed the lone striker role for the third consecutive Premier League game, and Connor Wickham was again tasked with operating from the left-hand side of Sunderland’s midfield.

QPR had so far endured a torrid start to their first season back in the top flight. The R’s had lost three out of three in all competitions ahead of Sunderland’s visit to Loftus Road, leaving some to speculate that Harry Redknapp was already on the brink of losing his job.

The 67-year-old QPR manager binned the 3-5-2 system which he obviously believed to be at the root of his side’s recent problems, reverting to a flat-back four in a more conventional 4-2-3-1 system.

With a change of system came a change of personnel. Richard Dunne and Armand Traore were replaced by Clint Hill and Junior Hoilett, whilst Loic Remy was nowhere to be seen ahead of a proposed switch to Chelsea, leaving Charlie Austin to lead the line for the West London club. 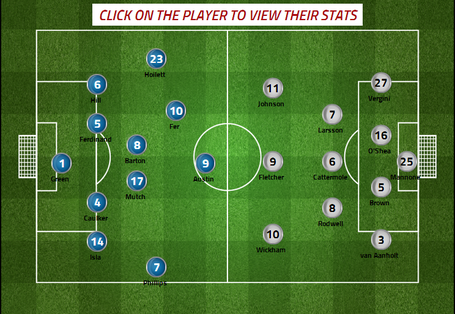 After successfully countering Lois Van Gaal’s 3-4-1-2- system last weekend, the Sunderland manager will have been confident that his side were suitably prepared to come up against an opposition also operating with a formation containing wing-backs. However, Redknapp reverted to a flat-back four in the second half of last Saturday’s 4-0 defeat to Tottenham, meaning exactly how QPR would line up for this particular fixture remained something of a mystery. That made Poyet’s match-specific preparations a little more difficult this week, not knowing exactly what shape he would be coming up against at Loftus Road.

With the Uruguayan more than settled on his current 4-1-4-1 system, and with Sunderland having played reasonably well in the opening two games of the season, it’s more than likely that Poyet sent his team into the game with instructions to very much carry on where they left off. Sunderland would as always attempt to control the tempo of the game and control possession, with Poyet no doubt ready to do some in-game tinkering once it became more apparent how QPR were going to set up.

Right from the first whistle it became clear that both sides had earmarked the fixture as a prime opportunity to pick up their first three points of the season. The tempo was high, and this perhaps benefited QPR more than it did Sunderland with the R’s slightly edging it in terms of hunger in the opening exchanges.

One notable characteristic of Harry Redknapp’s side was the positioning of Leroy Fer. The Dutchman was operating directly behind Charlie Austin in the number ten role, rather than in his usual position in the heart of the midfield. The fact that Junior Hoilett had been overlooked despite occupying the role throughout pre-season and scoring three goals in the process pointed towards a specific tactical decision from Redknapp, and it became apparent that Fer had been tasked with staying close to Lee Cattermole and hindering his influence on the game.

Lee Cattermole had been the topic of much debate in midweek regarding his exclusion from Roy Hodgson’s latest side, but unfortunately for the 26-year-old he failed to put in the kind of performance that would have left the England manager regretting his decision on this occasion. Cattermole struggled on the day, his long distance passing was off, and after an early booking he never regained his cool and looked on the edge of a red card all afternoon.

Unlike Manchester United last weekend, QPR were pressing high up the pitch, and this was preventing the Black Cats from settling in and playing the kind of controlled possession game Poyet would have liked. Nevertheless, Sunderland again appeared fairly solid defensively despite prolonged periods of pressure, and on occasions looked like scoring on the break. Steven Fletcher was particularly unlucky in one incident forcing Rob Green into a save with a low shot from close range after a clever pass from Adam Johnson.

QPR grabbed the only goal of the game deep in first half stoppage time, and it was yet another avoidable goal from a Black Cats perspective. Wes Brown was caught ball watching from a QPR corner leaving Charlie Austin unmarked to fire home. A frustrating way to end the first half with a goal so late in the proceedings, and a sign that perhaps Sunderland’s concentration levels weren't quite high enough.

The Black Cats started the second half unchanged, and it was Poyet’s reluctance to change his approach that I feel ultimately prevented Sunderland getting anything from the game. The minutes were ticking over, yet Sunderland hadn’t really reacted to going behind. The Uruguayan eventually made a double change in the 70th minute, but in my eyes this was a little too late on. The introduction of Emanuele Giaccherini and Will Buckley injected some much needed urgency into Sunderland’s play, and I honestly think had these changes been made earlier then QPR may not have been able to hang like they did.

I’m pleased to see that Poyet is keen to utilise Giaccherini through the middle rather than on the wing. The Italian often featured in this role at Juventus and could add a dimension to the team that has been lacking since the departure of Stephane Sessegnon. I thought Giachherini looked promising when he came on, his movement and passing was very good and given his physicality this is a role that he is perhaps more suited to in English football.

Again, Sunderland were noticeably more effective without Fletcher leading the attack. For the third week in a row the 27-year-old struggled to convince me that he is capable of operating efficiently in Poyet’s system. Although this was probably his best performance so far this season, it was by no means a good display. Fletcher simply isn’t commanding enough in his holding play and his link up play is poor. Wickham demonstrated in the final minutes that he is a better choice for the role, and for me Poyet absolutely has to start the 21-year-old up top ahead of Fletcher when Sunderland play Tottenham at the Stadium of Light in a fortnight.

Despite QPR retreating deeper and deeper in the closing minutes, Sunderland couldn't find a breakthrough, and the game finished 1-0. A frustrating afternoon.

To conclude, it’s probably fair to say that on the whole it was just one of those days for Sunderland. QPR managed to find the net in a game where both sides threatened each other’s goal, and the Black Cats failed to respond to going behind. I do feel that Poyet should have changed things sooner, but this is only a minor criticism.

Vito Mannone, Wes Brown, Patrick Van Aanholt and Santiago Vergini were all excellent on the day, Sunderland may have conceded in every Premier League game so far this season, but I still can’t help but feel positive about the competence of the current back line.

My main worry at the moment is Sunderland’s inability to really carve out a clear-cut opportunity when the opposition sit deep and defend. Paolo Di Canio talked about "finding the keys to the lock" and I feel that to some extent Sunderland are still looking. I would have perhaps liked to see Jordi Gomez play a part in the second half as I believe he has the creative capacity to make things happen, but this is all in hindsight.

Sunderland certainly haven’t looked bad in the opening three games of the season, but it’s important that they pick up a win soon to avoid any relegation talk creeping in.