Sunderland came from behind twice to rescue a 2-2 draw at the Stadium of Light following a difficult afternoon against a strong Tottenham Hotspur side.

Gus Poyet made one personnel change to the side defeated at Loftus Road a fortnight ago. New boy Ricky Alvarez was thrust straight into the first team replacing Steve Fletcher, and the Scotsman was dropped from the squad altogether in a decision which the Sunderland manager stated prior to the game was entirely ‘tactical’.

The introduction of Alvarez meant Connor Wickham was finally handed the role of leading the Sunderland attack. Adam Johnson switched flanks to fill the gap vacated by Wickham on the left, while the Argentinian debutant occupied a position on the right of the Black Cat’s midfield.

Poyet fielded his usual 4-1-4-1 formation, and aside from a re-jig at the top end of his Sunderland starting XI, the midfield three, back four and goalkeeper all remained unchanged.

Mauricio Pochettino’s Spurs have started well in the Premier League this season, but the Argentinian manager was forced to overhaul his side somewhat following a 3-0 drubbing to Liverpool last time out. Injuries to Kyle Walker and Roberto Soldado meant the pair were unavailable, and Nabil Bentaleb returned home too late from international duty with Algeria to be in contention.

Pochettino lined up with his trademark 4-2-3-1 formation, Jan Vertonghen was replaced by Vlad Chiriches at the heart of the Spurs defence, while Moussa Dembele returned to the team replacing the absent Bentaleb partnering Etienne Capoue in the centre of midfield. 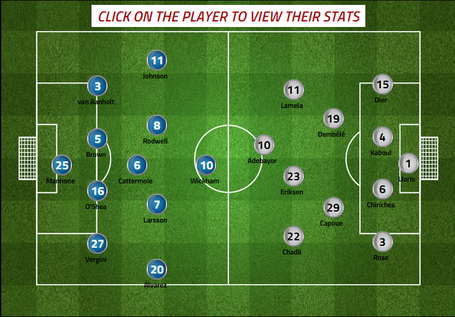 Gus Poyet will no doubt have demanded a positive reaction from his players following a somewhat disappointing defeat to QPR, but the 46-year-old will also have been under no illusions regarding the size of the task facing his side on Saturday.

The brand of attacking football Pochettino brought to Southampton is already showing signs of flourishing at Tottenham Hotspur, and that coupled with the quality of players at the Argentinian manager’s disposal meant Sunderland were in for a tough afternoon defensively countering the offensive threat of Spurs.

Poyet’s business in the transfer market this summer has suggested a keenness to add physical presence to what was at times a light weight Sunderland side last season, and physicality was certainly a dimension which needed to be called up before facing Tottenham who are themselves an extremely imposing side.

The game itself burst into life from the first whistle, and Sunderland were punished for some early defensive hesitance as Spurs took the lead in the fourth minute. Nacer Chadli was the only player to react as Vito Mannone palmed away a long distance effort from Emannuel Adebayor, and the Belgian pounced unchallenged to slot home the rebound. To Sunderland’s credit, their response was quick and decisive. Just two minutes after going behind, Adam Johnson demonstrated some fantastic wing play beating two defenders to fire home an equaliser. A great goal from Johnson, and a glimpse of the ability he has to cause problems that we maybe don’t see often enough.

Although back on level terms, Sunderland were being overwhelmed by the energy and attacking style of Tottenham Hotspur. Poyet’s side were undeniably playing on the back foot, and this was the general tone of the game all afternoon.

The fluidity and freedom of movement demonstrated by Spurs made it incredibly difficult for Sunderland to pick up players defensively, and this resulted in the Black Cats retreating deeper and deeper into their own penalty area. The off the ball movement among Tottenham’s front four in particular was a real master class, and without the ball Spurs were just as impressive. High pressure up the pitch and plenty of energy again made it increasingly difficult for Sunderland to get out of their own half. This style of high-energy pressing play is becoming noticeable as an effective way to counter Poyet’s particular brand of possession football, and it may be that something needs to be looked at in order to avoid becoming predictable and ultimately easily neutralised like Sunderland were on the day.

Lee Cattermole is a player that particularly struggles when this brand of football is being played in front of him. The 26-year-old is clearly a huge favourite amongst Black Cats fans for his energy, grit and determination, but I feel and have always felt that these qualities mask some real deficiencies in his overall game.

Cattermole’s enthusiasm is often also his downfall, and his positional discipline causes problems for the team – and that is a fact. Looking at Cattermole’s stats on Saturday, you can clearly see that the midfielder has not had a 'great' game by any stretch of the imagination no matter how exciting he may have looked with his regular bursts of energy and devotion to regain possession. 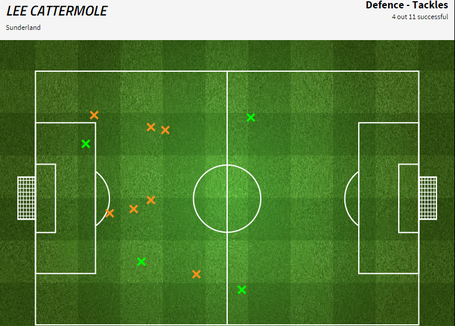 Cattermole was successful in only four out of eleven attempted tackles, and it’s the central grouping just on edge of the D that supports my argument best. Each of these failed tackles (and the third one directly lead to Tottenham’s second goal) are instances where Cattermole is reading the game, but failing to make the correct decision. In each instance, either Adebayor or Eriksen are receiving the ball to feet with their back to goal, and in each instance Cattermole’s over-exuberance to make an interception rather than hold his ground lead to him ending up on the wrong side of the attacker, easily rolled and effectively nullified in the particular passage of play. To Cattermole’s credit, he does recover very well, but I often feel the moments of his which gets the crowd up on their feet, are often moments where he has created a problem for himself to clear up.

Furthermore, from the perspective of Sebastian Larsson and Jack Rodwell who partner Cattermole in the midfield three, it must be extremely difficult for both of them to function knowing that Cattermole will not hold his position ahead of the back four. Rodwell in particular showed great vigilance filling in for Cattermole who regularly broke ranks, and a glance at Rodwell's defensive stats tell you immediately that his composure and decision making far exceeded that of Cattermole's on the day, and in fact, he deserves a great deal of credit for his performance. 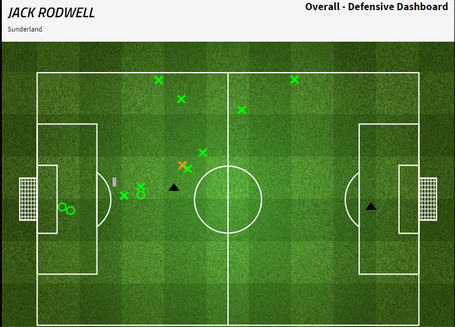 Of course, I have no idea whether Poyet encourages this or not. It may be that the Uruguayan is comfortable with Cattermole playing with so much freedom, but I personally consider it counter-productive defensively and would much rather see Sunderland fold into a rigid shape.

That said, I do believe Cattermole is playing the best football of his career under Poyet, and with a little positional and decision making guidance his dogged determination and obvious energy could be much better utilised.

Sunderland’s equaliser obviously came through an element of luck, and although for most of the game the Black Cats had held on for dear life, I still feel that a draw was almost deserved after another spirited performance.

I was glad to see Fletcher dropped from the side today after I’d been crying out for Wickham to head the Sunderland attack, and although the youngster didn’t have the best game of his career, I think he did enough in his link up play and ball retention to show that he is the better option. I’ll wait until next week to give a more definitive decision on whether or not Wickham has stepped up to the task.

Poyet made a double substitution early on which I think ultimately turned the game for Sunderland and helped steel a point, which again I was happy to see after bemoaning his hesitance to change things a fortnight ago at Loftus Road.

All in all, another very decent point for Sunderland following a tricky fixture. It bodes well that Sunderland can be the worst team on the day yet score twice and come away with a draw, so at this moment in time I’m not overly concerned about anything. In fact, a win away at Burnley next week would make for a very solid opening five games of the season.