The game, which is the penultimate tie of our pre-season campaign, sees Gus Poyet's men take on Los Verdiblancos at the home of Northern League side Bishop Auckland, who have kindly allowed us to use the venue for both of this week's fixtures in order to allow the Stadium of Light pitch more time to prepare for Premier League football.

Tickets for the match, which went on sale on the 28th of July, are now SOLD OUT - so, if you were hoping to pick some up tonight before the game you've left it a bit too late. It might be advisable that to avoid the same thing happening before Saturday's game with Udinese that you sort your tickets out for that game as soon as possible, as no doubt that game will also sell out, with the capacity of Heritage Park only at around 2000 people.

Jack Rodwell is expected to play a part in the game, as is Jozy Altidore, who is scheduled to make his first appearance of pre-season after returning to the club later than the rest of his teammates due to his participation in the World Cup for the United States.

For the benefit of those that want to know where to park their car tonight I've put my outstanding image editing skills to good use and knocked up the following, with a little help from my friends Google Maps and MS Paint: 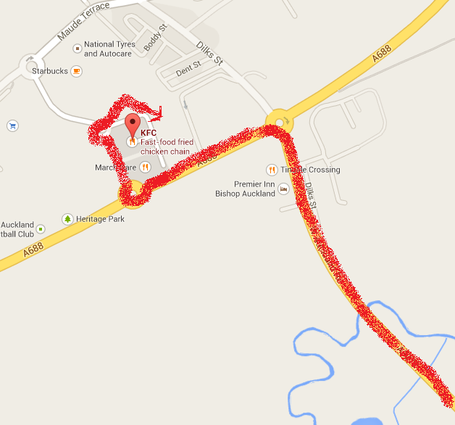 Parking at Heritage Park is ample and, at least for the Darlington game, was free - all we were asked for was a small donation to the football club if we had any spare change, so it's your prerogative on whether or not you want to contribute.

If you're at a loose end and looking for something to do pre-match there's a Sainsbury's (ooh!), a KFC (ooooh!) and a couple of pubs, one of which does food - the March Hare (OOOOOH!). It was the March Hare that seemed to be where the majority of SAFC fans congregated on our last visit to the area and it has a large garden to the rear, with a decent selection of beers on offer at the bar.

I can't confirm if it will be the same case this evening but there was a pop-up bar pitch side for the Darlington game that served cans, meaning you could enjoy the game with a beer in your hand. Not bad, really.

Hopefully I've covered just about everything. I'll be live tweeting and posting photos on Twitter before, during and after the game so, if you don't already, you can follow me at @GavinSAFC.