Sunderland came from behind to draw 1-1 with Manchester United at the Stadium of Light, with Jack Rodwell heading home the equaliser for the Black Cats.

Gus Poyet made two changes to the side that drew 2-2 away at West Bromwich Albion last Saturday. Santiago Vergini lined up to make his second Sunderland debut after re-joining the club on loan, the Argentinian replaced Valentin Roberge and slotted in at right-back allowing Wes Brown to reclaim his usual position at centre-half. An illness to Adam Johnson meant Will Buckley was thrust into the first-team for a daunting full debut, taking the place of the England international on the right-hand side of Sunderland’s midfield.

Poyet continued with his tried and tested 4-1-4-1 formation, and Steven Fletcher was again the preferred choice to lead the line for Sunderland leaving Connor Wickham to play from the left-hand side for the second week in a row.

A change in system just two weeks into the season would have meant Louis Van Gaal admitting he got his tactics horribly wrong ahead of the 2-1 defeat to Swansea last Saturday, so it’s unsurprising that Manchester United again lined up with the Dutch manager’s signature 3-4-1-2 formation. This particular system is characterised by its requirements in two specialist positions – left and right wing-back- and is immediately compromised by the fact that Van Gaal has no personnel fully equipped to fill either of these positions anywhere in his current squad. Antonio Valencia and Ashley Young were the pair tasked with manning the right and left wing-back roles respectively, with Valencia probably slightly better equipped than Young having at least some experience of playing as a right-back at United.

With business still to be done in the transfer market, United are a stretched side at the moment and absentees for this fixture only stretched the squad even further. Van Gaal welcomed the return of his compatriot Robin Van Persie who was immediately reinstated into the first team, but £30 million pound signing Ander Herrera was forced to miss out through injury, leaving Tom Cleverly to fill the boots of the absent Spaniard. 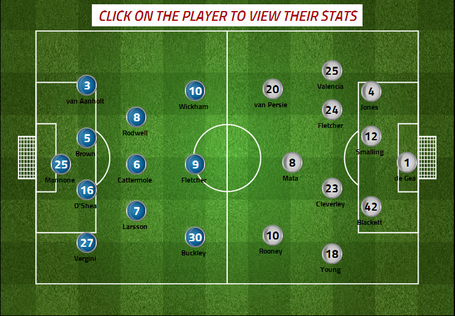 Of course, as usual, Gus Poyet will have prepped the players to implement his brand of possession-based football in an attempt to control the tempo of the game and limit the amount of time Manchester United have on the ball. But aside from the 46-year-old’s general ethos, the Uruguayan’s match-specific preparations for this fixture will no doubt have been focussed on exploiting Manchester United’s obvious current weaknesses.

The 3-4-1-2 formation deployed by Van Gaal is very similar to a 3-5-2 system, both of which require a great deal of training, patience and ultimately the right personnel before they can be successful – look no further than Gus Poyet’s own brief failure to utilise 3-5-2 at Sunderland last season for evidence of that. With Van Gaal’s managerial tenure at Manchester United only one competitive game old before Sunday’s game, this was a chance for Poyet to capitalise on an un-adjusted Mancester United side.

Generally, the most effective way to neutralise a 3-4-1-2 system is to pin back the wing-backs as best as possible and limit the amount of support they are able to give in attack, forcing the opposition to play through a congested area in the middle of the park.

Rather than tasking your wide midfielders to man-mark the wing-backs, the easiest way to achieve this is by encouraging the wide men to hold a position in the space vacated behind the wing-backs, forcing the said wing-backs to have one eye on their defensive responsibilities.

Sunderland started the better of the two teams. With the home crowd behind them, the Black Cats looked hungry and were successful in controlling possession in the early exchanges while Manchester United looked tentative to say the least.

It became apparent pretty early on in the game that Gus Poyet had decided to adopt a more unpredictable approach in order to neutralise Van Gaal’s 3-4-1-2 system. Rather than Wickham and Buckley holding a position up the pitch to pin back Valencia and Young, without the ball Sunderland were folding into what was essentially a back five. Buckley was retreating to counter Ashley Young’s attacking advances, with Van Aanholt responsible for dealing with Valencia on the opposite flank. Santiago Vergini was then free to move inside to act as almost a third centre-half man marking Van Persie, with Wes Brown doing the same job on Wayne Rooney. This left John O’Shea to act as the covering defender, whilst Lee Cattermole marshaled Juan Mata. 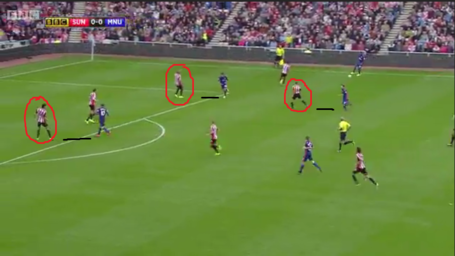 This particular approach requires an extreme amount of organisation and discipline, and it’s a huge credit to Poyet’s tactical nous and match preparation that Sunderland successfully pulled it off for 90 minutes.  Both Wayne Rooney and Robin Van Persie were almost completely nullified all afternoon and offered very little influence on the game thanks to this defensive system.

Unfortunately for Sunderland, the one instance we really saw Manchester United manage to break this defensive shape it lead to the opening goal of the game. In the passage of play in question, Lee Cattermole was forced to pass on Juan Mata to Sebastian Larsson so as to double up on Antonio Valencia attempting a cross at the by-line. The cross wasn’t stopped, and Juan Mata escaped Sebastian Larsson to tap in with ease at the far post. A shame for Sunderland who defended well for the whole game, but were punished for one momentary lapse in concentration. On the up side, it was the only real chance Manchester United were allowed to create all afternoon, so I’m sure Gus Poyet will feel very positive about that and it bodes well for the season ahead. 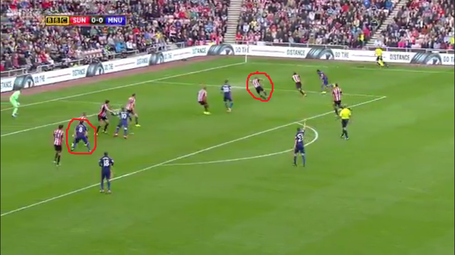 From an attacking point of view, Sunderland were seeing enough of the ball but were unable to piece together passes where it really mattered. This was largely down to the fact that Manchester United were exerting a very low amount of pressure in the final third of the field and allowing Sunderland to move the ball around providing it was in their own defensive third. With so much congestion in the middle of the park, and with Manchester United retreating so deep, the Black Cats weren’t being allowed much room to put together a passing move in the opposition half and as a result clear cut chances were few and far between.

Looking at Sunderland's equaliser, there's not a lot that can be said about it other than the new man showed some decent movement and took the header quite well. Sunderland have been clever with set pieces since Gus Poyet has been in charge, but this was as straight forward as you’ll see. Shocking marking from Manchester United, far too easy for Rodwell to climb unchallenged to head home.

The remainder of the game featured a few heart in mouth moments for Sunderland fans. The Black Cats never really managed to create a chance good enough to win the game aside from Wickham's brief sight at goal early in the second half, and Manchester United looked the keener to push for a winner. The game finished 1-1 and Gus Poyet seemed reasonably content with what is a good point and the second week in a row his side have come from behind to claim a draw.

Tactically, Gus Poyet got it absolutely spot on and a draw at home to Manchester United under any circumstances is a very decent result. Sunderland were superb defensively, but the front three lacked the necessary incision and conviction needed to take the game to Van Gaal’s side, and ultimately this is what prevented Sunderland from snatching all three points on the day.

Will Buckley had a very good game, there’s no denying that, but Connor Wickham is not being allowed to show his true worth out on the left-hand side and Steven Fletcher again was hugely ineffectual as a lone striker. Like last week, Fletcher simply isn’t successfully playing the role. The Scotsman isn’t winning enough duels, he isn’t holding the ball up sufficiently and for that reason Sunderland aren’t being allowed to advance up the pitch in order to create chances.

Statistically, the comparison below of both Connor Wickham and Steven Fletcher proves that the former is far more suitable to play the lone striker role at Sunderland, and I’m confident we will see that happen as soon as Poyet recruits sufficient cover for the wide positions.

For me, Fletcher has a lot to prove next week at QPR (if he starts), even Jozy Altidore proved in a brief fifteen minute cameo that he may even be the better choice to lead the Sunderland attack. The American may not have a handsome goal return on his side, but his physical attributes and determination alone could ultimately benefit the team enough to justify his involvement ahead of Fletcher at this moment in time.

A notable strong debut from Will Buckley. Lee Cattermole was impressive, as was Vergini and Van Aanholt both of whom made some very important interceptions.

Jack Rodwell will be very pleased after notching a goal in his first game at the Stadium of Light, but we are yet to see what he really has to offer, and patience is needed whilst he gets back to speed with life as a first-team regular.

Looking ahead to the trip to Loftus Road next Saturday, QPR have suffered a torrid start to the season with Harry Redknapp sporting a similar shape to Van Gaal at Manchester United (3-5-2). Providing that the R’s boss doesn’t abandon his system and revert his players back to a more conventional flat-back four, Poyet could be licking his lips after a very competent performance on Sunday.

Sunderland 1-1 Manchester United: As It Happened