A massively noticeable upturn in form from Sunderland's midfield general should, but probably won't, lead to an international call up, writes @GavinSAFC.

When Lee Cattermole was handed the man of the match award following on from Sunday's draw against Manchester United it was recognition for a level of performance that Sunderland fans have come to expect since Gus Poyet vetoed the controversially-judged midfielder's move to Stoke City in January. The fact, regardless of what anyone outside of the Sunderland supporting bubble will have you know, is that Lee Cattermole has developed into one of English football's most unheralded talents with a skill set that the national side desperately lack.

I'll be honest, my feelings towards Lee Cattermole were completely different at the turn of the year, around about the time of the Aston Villa game on New Year's Day when his mistake was the one that cost us the game. Throughout that month it seemed as though Lee was on borrowed time as a Sunderland player, with Stoke constantly linked with signing him and Poyet, effectively, bringing in a 'replacement' in Liam Bridcutt from Brighton. His role, at the fulcrum of Poyet's 4-3-3 system, is the one that the Uruguayan values higher than any other and Cattermole was faced with a fight for his place in the side against a player that Poyet rated as his greatest when the manager of Brighton & Hove Albion. Fortunately, fight is a word that resonates most with Lee Cattermole.

Foolishly, I wrote him off as done at this club. Many others did too. When things aren't going right the first thing people want is change, and something new and shiny in the form of Liam Bridcutt was welcomed with open arms in the hope that we'd see an upturn in our fortunes. That said, I firmly believe that had we sold Cattermole to Stoke in January we would have been relegated, without question, without his contribution in our brilliant run of form at the end of last season.

It has taken time, but Catts has finally 'got it'. Slowly but surely, he's been allowed to develop into the player that we all thought that he could become when he was first signed by Steve Bruce in 2009. I have confidence in saying that the Sunderland fans reading this don't need me to convince them about the qualities that Lee Cattermole brings to the Sunderland cause, because we see it week in, week out. Those that need convincing are his detractors that won't see past their judgement cast on a much younger, much more immature Lee Cattermole from years gone by.

Many Sunderland fans on Twitter took exception to a tweet made by Sam Wallace of the Independent during Sunday's game which suggested that, in his opinion, international football is beyond the likes of Lee Cattermole. 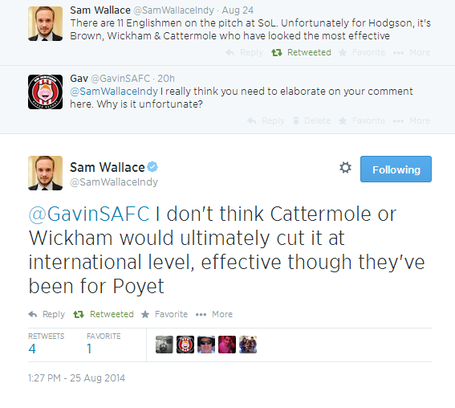 Sam is entitled to his opinion and I respect that - I'm not expecting everybody to agree with my feelings on the subject. My take, for what it's worth, is that it's an opinion shared by the majority of football followers outside of Sunderland, one which I feel unfairly judges Cattermole based upon his past misgivings.

It's often leveled at the Stockton-born midfielder that he's a 'liability'. It would be fair to say that as a younger player Cattermole, with his combative style, would often be drawn into making rash decisions that would often see him booked or sent off. Now, since arguably becoming Poyet's most important player, we've seen a different side to Lee Cattermole. He no longer charges around the pitch without thought - he seems to have learned how to put his assets to best use. You don't give second best when you play alongside him in that midfield, because he just won't accept it. He gives drive and passion every time he steps on that field, regardless of the opposition, and I don't feel there is another midfielder in this league that closes down and wins the ball back as well as Cattermole does.

In terms of Cattermole "ultimately not cutting it at international level", I just won't have it. There's nothing likable about the current England team. There has been a distinct lack of character in almost every England side for the past ten years and, disappointingly, one of the most valuable assets at the disposal of Roy Hodgson is being overlooked. And, anyways, how many of the current England side 'cut it'?

Its an attitude - arrogance, perhaps - that has seen England fail time and time again when it comes to the big stage. We - more specifically the members of the southern-based national press - think we're beyond the likes of Cattermole because, presumably, he doesn't play for a big club. Since he was appointed as England manager two years ago Hodgson has called up the likes of Jake Livermore, Jonjo Shelvey and our very own Jack Rodwell, seemingly because of who they played for at the time. Manchester United's Tom Cleverley, whom Cattermole completely overshadowed on Sunday, has earned thirteen caps under the stewardship of the current England manager. It's hard to give credence to the case that Cattermole isn't good enough at international level when we are handing out opportunities to those players listed.

Scott Parker, another arguable selection, played every game under Hodgson at the last European Championship tournament and is probably the last actual defensive midfielder that England gave recognition to. Since then Hodgson has plugged round holes with square pegs in the form of Steven Gerrard and Jordan Henderson, neither of whom are out-and-out defensive midfield players. The deficiencies are less noticeable when playing against poorer opposition but Gerrard looked massively exposed in that role when faced with more talented sides like Uruguay and Italy at the World Cup. Hodgson has tried Phil Jones there, whose best position is at centre half, with mixed success.

It's not a case of Cattermole not being capable of performing on a big stage, either. He was arguably our best player in the cup final. We're talking about a player that plays every week against teams that are better than the majority of international sides; a player that has played in a tournament final with England U21s, and captained Middlesbrough in the top flight when he was only seventeen years old.

Despite all of that, I'm not daft enough to expect that Lee Cattermole will be anywhere near then next England squad when it is announced ahead of the Norway game on the 3rd of September. The fact that Hodgson's trip to the Stadium of Light in February to take in our league game against Hull City - the first by an England manager since Sven Goran Eriksson's reign - was given so much of a spotlight tells you all that you need to know about how much notice he takes of Sunderland's players. On current form, Lee deserves to be there.

I'm happy for Cattermole to continue to steadily improve under the tutelage of Gus Poyet, performing at such a high level that we're even talking about him earning international recognition. For all that is England's loss, it is Sunderland's gain.

Is Lee Cattermole good enough for international football? Give your vote in the poll below.