A last-gasp equaliser from Sebastian Larsson rescued a point for Sunderland at the Hawthorns, just as a brace from Saido Berahino looked to have secured all three for the Baggies.

Gus Poyet made it clear last week that there were still places up for grabs amongst his starting eleven for the Premier League opener, whereas the shape the Uruguayan would deploy was never in any doubt. As expected, the 46-year-old fielded his favoured 4-3-3 formation, which more accurately can be broken down into a 4-1-4-1 featuring two inside forwards.

Mannone retained his place between the sticks despite the recent arrival of Costel Pantilimon, and the unexpected absence of Santiago Vergini meant Poyet was forced to field a somewhat makeshift back four. Wes Brown moved over to fill in at right-back, and Valentin Roberge stepped in for Vergini to partner John O’Shea in the heart of the Sunderland defence.

Lee Cattermole occupied his usual half-back role in front of the back four, and Sebastian Larsson was favoured to Jordi Gomez to start alongside big-money signing Jack Rodwell, completing the centre midfield three.

Steven Fletcher got the nod ahead of Connor Wickham to form the focal point of the Sunderland attack, leaving the 21-year-old to operate from the left-hand side, with Adam Johnson playing opposite Wickham on the right of the Black Cats’ midfield.

Not an easy game for Poyet to prepare for, Allan Irvine’s first managerial position in the Premier League and first managerial position for three years meant West Brom were something of an enigma in terms of how they would set up. The Baggies boss fielded a 4-1-4-1 formation, with the most notable characteristics being a big and physical back four and a big sturdy striker in Victor Anichebe with the pace and trickery of Saido Berahino operating just behind the Nigerian. 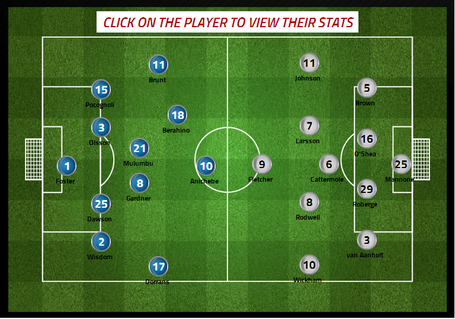 Gus Poyet has a firm belief in his own brand of football, and we are unlikely to see much difference in the initial approach all season. His patient possession-based game is characterised by its emphasis on controlling the tempo of a match, and ultimately making the opponent work hard to regain the ball. This approach was the backbone of Sunderland’s remarkable great escape last term, and the Uruguayan has had a full summer with which to instil his philosophy even further on the side.

The acquisition of more attack-minded full-backs Billy Jones and Patrick Van Aanholt, and a box-to-box midfielder in Jack Rodwell are evidence that Poyet is determined to add further dimensions to his side, and that there is certainly an allowance there for the players to put together much quicker transitions between defence and attack, hitting opponents on the break when the right opportunity arises.

West Brom came out the blocks quickest and were the better of the two teams in the opening exchanges. In fact, a Lee Cattermole wonder goal masked what was in truth a shaky first half for Sunderland as they struggled to control possession and pushed their luck on numerous occasions defensively.

On the most part, Sunderland’s struggles were down to the difficulties caused by the makeshift defence, West Brom’s own exuberance and Steven Fletcher’s failure to do the absolute basics. When playing as a lone centre-forward - especially away from home – your number one priority is to provide an outlet for your team, holding up the ball efficiently and facilitating the transition between defence and attack. Fletcher simply didn’t do this well enough on the day, and it made for an especially tough opening 45 minutes with Sunderland hemmed in for the most of it. 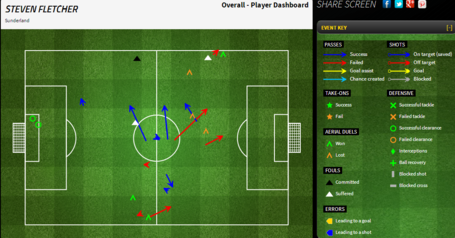 That said, there is no doubt that the Black Cats were slightly unfortunate not to go in ahead at the break. The penalty decision given against Roberge was indisputably incorrect, and although the Baggies did deserve their equaliser, they gained it through a very poor piece of refereeing.

There was a lot more to be positive about in the second period. Sunderland were more aggressive and were showing signs of settling in and controlling the play better, until the Baggies took the lead in the 73rd minute.

Debutant Patrick Van Aanholt was largely to blame for the goal. The Dutchman was out of position and failed to track the run of Berahino as the Baggies striker tapped in Craig Gardner’s cross unchallenged at the far post. Van Aanholt has been receiving some rightful praise for his input on Saturday, but although he made some telling contributions it was by no means, a perfect performance.

Statistically the 23-year-old was very impressive making more interceptions than any other player on the field and making a number of important challenges, but it was his positional game and decision making – something which cannot be picked up by the statisticians– that was a slight cause for concern. Too often the defender was caught criminally out of position defensively, and against a better side Sunderland may have been punished heavily. To the youngster’s credit, he responded well to his mistake providing a wonderful assist at the other end as Larsson put away a very well worked Sunderland goal.

The aesthetics of Larsson’s late equaliser is an early example of what Sunderland can do under Poyet’s system, and a definite reason for Black Cats fans to be cheerful after a decent away point on the opening day of the season.

To conclude, an encouraging way to kick off the Premier League season and certainly an improvement on last season’s misery at home to Fulham. Sunderland showed great spirit to go behind so late in the game yet still come away with a point, and there was a real clinical presence in front of goal as the side put away both of their only two shots on target. With business still to be done in the transfer market the team are not yet the finished article, so with that in mind Poyet will no doubt be reasonably pleased with the overall performance.

It may seem like I have gone after Steven Fletcher and Patrick Van Aanholt a little in my analysis, but I want to make it clear that my intention isn’t to scapegoat the pair, I am merely pointing out the two aspects which I feel ultimately prevented Sunderland from fully controlling the game and getting all three points - excluding Neil Swarbrick’s influence. Reflecting on pre-season Fletcher seems to have found his goal scoring boots again, and I’m confident Van Aanholt can be a useful signing with a little positional guidance – it was his debut after all.

Notable strong performances from Wes Brown and Sebastian Larsson were a real positive from the game, and a late but impressive cameo from Jordi Gomez suggests the Spaniard may be a bargain alternative to Ki Sung Yeung considering the Korean’s reported  £5million price tag.

Onwards to the visit of Manchester United on Sunday.

West Bromwich Albion vs Sunderland: As It Happened