ANALYSIS: No Williams For Sunderland, So What Are The Alternatives?

Sunderland seem to be looking for a new affordable established Premier League centre back. It won't be Ashley Williams, so where do they look next?

Share All sharing options for: ANALYSIS: No Williams For Sunderland, So What Are The Alternatives?

So, as it turns out, Ashley Williams has a brilliant agent and he has got that long-term contract at Swansea that he wanted after essentially using Sunderland's interest to broker himself a better deal. Fair enough, really. That's what agents are for.

Anyway, the upshot is that Williams won't be coming to Sunderland, so if an established Premier league centre back is still on the club's summer wishlist -- and it almost certainly should be -- then who else is there who can be considered a comparable alternative?

Just one look at the England squad will show you that it is not exactly a golden era for Premier League centre backs. Nevertheless, there are a few who could be considered within Sunderland's reach who could offer a direct alternative. 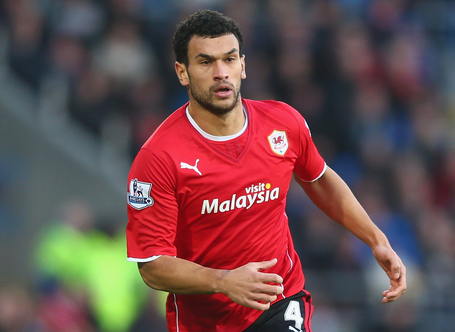 You could be forgiven for asking why it wasn't Steven Caulker at the very top of the list for Sunderland rather than Williams in the first place. The Cardiff City skipper is a full England international, has three solid seasons of Premier League football behind him, and at 22-years-old has years at the top ahead of him. He's the kind of centre back you can build a team upon at this level.

The downside, obviously, is all that comes at a cost. Cardiff paid a fee reported to be around £9m for him a year ago and it's unlikely they would feel the need to accept any less now. Indeed, he has already been 'triffic-ed' by Harry Redknapp with a fee agreed, which usually means in similar cases that the promising young footballer's eyeballs are about to be replaced by dollar signs and his actual football development about to stop forever. To put it another way, if Sunderland want Caulker, they would have to move quickly and expensively. 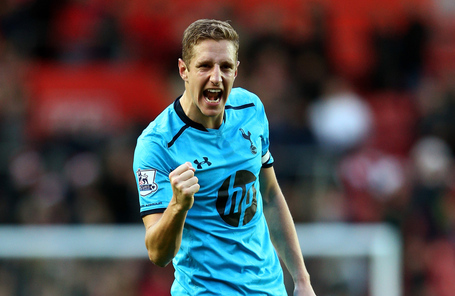 The Tottenham Hotspur captain is someone who is seemingly linked with Sunderland every single summer without any actual reason or substance. This summer may just be the right time to get him. At 30-years-old he isn't the freshest of players but still has plenty of years left in him. What he lacks in pace compared to others he more than makes up for in experience.

He wouldn't cost as much as Caulker, even with the infamous Levy-tax you tend to incur when dealing with Spurs. However, Hull City have been strongly linked and they are throwing money around like they found Fort Knox buried under the Humber estuary, so he wouldn't come cheap. 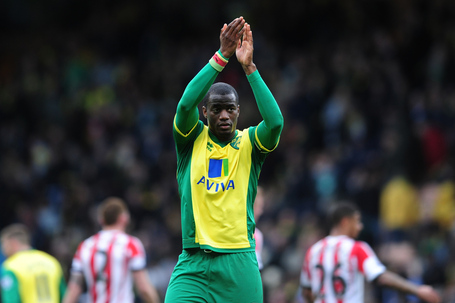 Okay, this one probably isn't going to be popular. No, in terms of pedigree he really isn't in the same league as the previous two, or Williams for that matter. However, that's that lack of Premier League defensive depth that we wre talking about before.

It doesn't mean Bassong should be declared just totally useless and dismissed, though. He does have some upside. Like the others, he has captained his club in the Premier League. He's quick, strong, mobile, and being a natural left-footer he can offer a little balance to a central defensive partnership. At 27-years-old and with 164 league and cup appearances to his name, he is theoretically coming to his peak.

There are two relegations against his name and if Norwich value Robert Snodgrass at £8m then God knows what they'll demand for anyone else, but I'd suggest he is a decent enough alternative to at least consider.

How do they all compare?

That's the tricky part, I suppose. Like Williams they are all established Premier League defenders, captains of their current sides and all younger than Sunderland's current centre back pairing. That's where the comparison's end, though. Under the bonnet, they all have very different things to offer.

Yeah, this question seems quite important when discussing centre backs, right? Williams is particularly strong at the donkey-work of defending, that is to say clearing his lines and making interceptions. None of the other three can hold a torch to him on either front there. 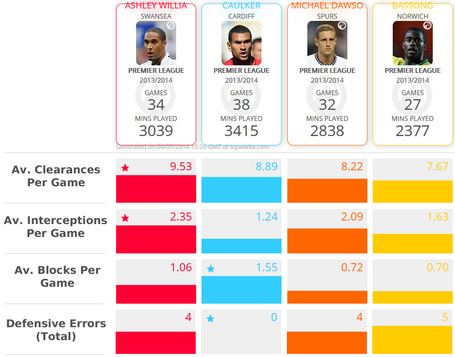 However, Steven Caulker is -- according to Opta at least -- coming off the back of a error-less 38-game season, which sounds pretty incredible considering the pressure that comes with a relegation scrap. Then again, John O'Shea also didn't make what Opta consider to be a 'defensive error' last season either, so make your own mind up about the relevance of that particular stat. Wes Brown, apparently, made three.

Where all three players here offer a significant improvement on O'Shea (5.33 av. per game) and Brown (5.48 av. per game) is in the clearances department. Obviously, clearing our lines last season was a huge failing and displaying a fundamental inability to defend certainly sounds like something Sunderland centre backs would do.

What if they become isolated?

Clearances, blocks and interceptions can often be more a product of tactical organisation than anything else, so perhaps it would be prudent to see how these three do when isolated one-on-one. You know, when they are defending their own turf as a man rather than their goal in a team.

What immediately stands out here is that both Caulker and Bassong just do not give fouls away. When you defend set pieces like Sunderland do -- or don't, as it happens -- that could be a big positive. Then again, it could also display a little lack of street-smarts and nasty streak that all the best defenders have. It's a very tough one to judge, and one with which statistics alone will always struggle.

It's Dawson who shines in the air, though. His aerial success rate of almost 65% offers a relatively large improvement on what we already have. For context here, John Terry was 64% and Martin Skrtel 69%. 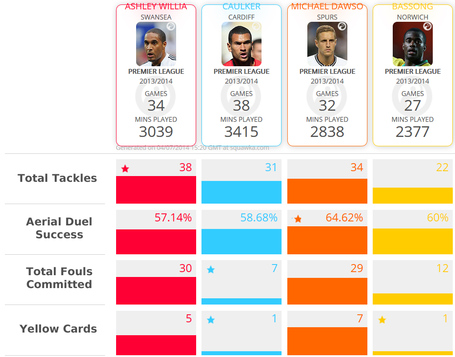 In terms of tackling, all do so at a comparable rate to Williams, though only the Welshman here can best O'Shea's total of 35. Only Bassong failed to better Brown's 25.

Are they Poyet-proof in possession?

So far, Gus Poyet has only signed one central defender for Sunderland, Santiago Vergini, and it's fair to say that he was more noted for his comfort on the ball and passing than his actual defending. It's fair to say, then, that a degree of reliability in possession is an important part of what Poyet looks for in a defender -- and goalkeeper, and probably groundsman knowing Poyet.

This is an area where you have to be very careful with statistics, as the teams the players are playing in can have a dramatic affect on the figures. As you'd expect given they play in more possession-intensive teams, Williams and Dawson made far more passes than the ultimately relegated Caulker and Bassong. 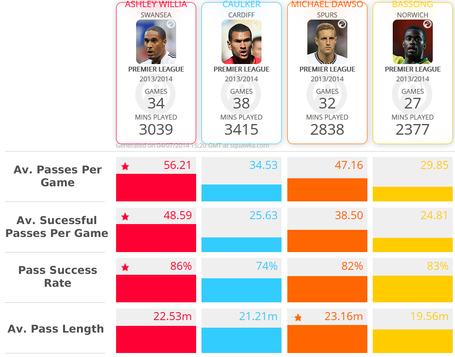 Bassong does very well in terms of pass completion here and, considering no team had a longer average pass length in the Premier League than Norwich last season, the fact he apparently plays a lot of shorter simpler passes suggests his natural game would be a good fit with Poyet's precious passing philosophy.

You almost feel inclined to always include a disclaimer with passing statistics, though. They can only ever tell you the quantity of passes, never the quality. A pass that plays a team mate into trouble immediately after he receives it or sends him down a blind alley is still deemed a 'success'. So a little caution there, I think.

What are the other options?

As I've mentioned, there are not exactly a great deal of established Premier League proven centre backs you'd seriously think were in Sunderland's reach this summer. There are perhaps the likes of Curtis Davies and James Tomkins, but they seem incredibly settled at their current clubs. You also have Geoff Cameron at Stoke City who has been linked with the club a couple of times now, though he is mainly proven in England as a full back, where he played 36 of his 37 games for the Potters last season.

Then you are lurching into the more unproven territory. Kurt Zouma of Chelsea has been suggested as a target, and although he has excelled in Ligue 1 you never really know how that will translate to the Premier League (just look at Mapou Yanga-Mbiwa). You could also start looking abroad, though that would seem to go against the transfer policy of looking for proven pedigree in this division for key positions.

A compromise could be to look at players who are currently abroad but have a history of performing in England. Hamburg's former Chelsea and Wolves defender Michael Mancienne would come into it there you'd think.

Either way, it certainly isn't tough to see why Williams was seemingly top of the list for Sunderland this summer. Of those out there, he looked by far the best fit at the best price.

**Many thanks to squawka for the statistics/graphics