ANALYSIS: How Mutch Would Jordon Add To Sunderland?

All the signs seem to be pointing to serious Sunderland interest in Jordon Mutch, but what does he have to offer? We crunch the numbers.

Share All sharing options for: ANALYSIS: How Mutch Would Jordon Add To Sunderland?

In the apparently eternal Sunderland quest for some central midfield quality, the name Jordon Mutch probably didn't excite all that many fans.

I'm no different really. One brilliant performance against us down at Cardiff in December, when he scored one goal on his right foot and created a second with his left, aside, I can't say he ever really caught either my eye or imagination during his only season to date in the Premier League. I certainly can't, and won't, claim to be an expert.

However, with reports strengthening of some Sunderland interest, I thought I'd do at least a little to change that. Statistics can be flawed and are only ever an aid to debate rather than an end to them, but it's still often worth just crunching a few numbers, US sports style, to see what they throw up. So I took to squawka's comparison matrix to see how he compares statistically to some familiar faces so we can at least try to find our bearings here.

I've compared him to Seb Larsson, Jack Colback and Ki Sung-Yueng from last season and, just for the sake of it, Jordi Gomez's figures from his last season at Premier League level to see exactly what Mutch has to offer here.

Is there anything in the link or it is just paper-talk?

Good question, voice in my head, and it's a reasonable place to start. The simple answer is that, whilst no one knows right now if Jordon Mutch will actually sign for Sunderland, there is sufficient smoke for there to have to be a big raging fire here somewhere. The stories are coming from the more creditable people like Chris Young and George Caulkin, so I think it's fair to say that there is plenty solid interest there.

Right now, the suggestion is that Cardiff are holding out for a fee that matches a reported £5m release clause in his contract. I suppose only Lee Congerton knows for sure if we'll be meeting that.

Can he pass a ball?

The short answer here, is no. Well, not that he has demonstrated so far, at least. He isn't going to replace Ki Sung-Yueng's dominance of the ball or Jack Colback's reliability in possession. He is far more progressive than the latter, however, making more forward passes per game. 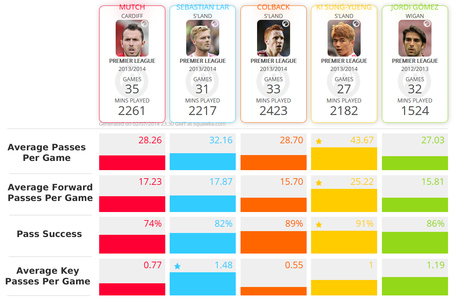 The player from last season he most closely resembles in possession is Seb Larsson. That may not get the pulses racing, though with Mutch we are seeing what we could probably consider baseline figures. He was playing in team who were ultimately relegated and not really known for controlled possession. In a Poyet system that is designed to create angles for simple passes and retain the ball, you could almost certainly expect and upturn in his numbers.

Can he do anything good with the ball when he has it?

It definitely looks like it's worth giving him a football, yes. Sebastian Larsson created more chances than Mutch did last season, though you have to take into account the amount of set pieces he takes. It's a good example, actually, of the limitations of considering just numbers.

In every other category, though, he bests his nearest rival in our comparison. He provided more assists than the others and completed more successful take-ons than Larsson, Colback and Ki combined last season. 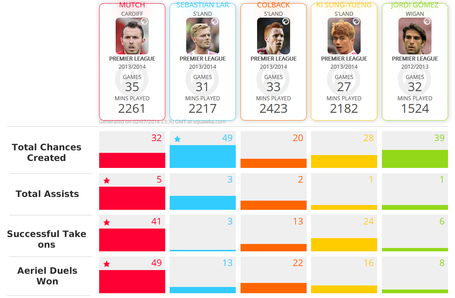 It's worth noting here how Jordi Gomez also scored particularly highly in the chances created department the last time he was in the Premier League. However, once again, those numbers are swelled by set-pieces.

Will he do the dirty work?

Yes. Perhaps a little too dirty at times. I mean, he gets beasted by Lee Cattermole in every single category here, but you'd expect him to. You'd also expect him to play a totally different midfield role to the chest-waisted Stockton Xavi, hence him not being a part of the main comparison. I am sure most will remember his battle with Catts at the Stadium of Light last season, so he obviously isn't lacking in a little courage.

He does compare very well to Sunderland's midfield from last season, essentially matching Larsson and Colback tackle for tackle whilst blocking more shots. 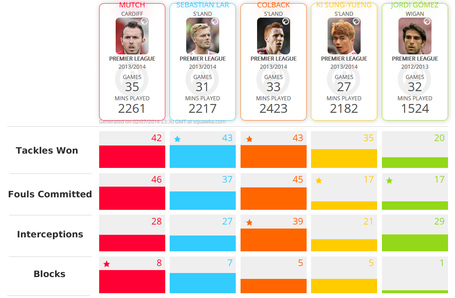 He gave away plenty of fouls, but generally speaking his defensive donkey-work would pretty much be a replacement for Colback who, obviously, has sadly decided to no longer exist.

Is he a goal threat?

Well, he threatens far more than our central midfield tended to last season, put it that way. That's not hard, though, so it's best you make up your own mind there I think.

He scored as many goals himself as Larsson, Colback and Ki managed between them, and he also beat that trio individually for shots on goal too. Jordi Gomez rattled more shots towards the goal the last time he was in the Premier League, though far more of Mutch's actually hit the target. 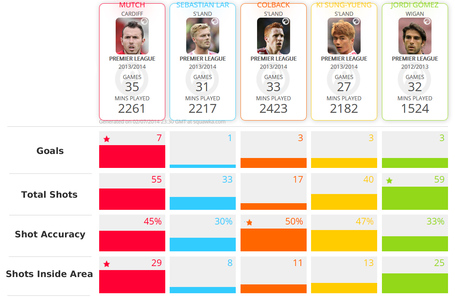 Crucially here, more than half of Mutch's shots (53%) came from inside the penalty area, which demonstrates he is a player who likes to get himself in the box and on the end of things. When you compare that to Larsson's (24%) and Ki's (32%) figure of last season, as well as Colback's dismal total of 17 shots in total for the whole season, that would appear to satisfy a big problem for the club. For those wondering, and you probably should as it's a very relevant comparison, just 6 (26%) of Craig Gardners 23 shots last season were inside the area and 33% hit the target.

It's also worth noting that Jordi Gomez's figure for shots inside the area is also a huge upgrade on the Sunderland midfield from last season.

So how Mutch would he add?

You can't really say until you actually see him. If Moneyball was applicable to football, someone would have done it successfully ages ago. Statistics can be misleading and the vast array of tactical options in football can create wild swings in figures.

What we can say, however, is that last season - in a comparable side and situation - Jordon Mutch matched the defensive output of the likes of Larsson and Colback whilst also managing to create more attacking product. He scored more goals, created more, had more shots and got in the box more.

He won't be the classy, elegant midfield general that fans have craved for years, but Mutch would certainly seem to be capable of providing the Sunderland midfield with something they were lacking last season.