Out Of Tragedy, A United North East To Be Proud Of

Share All sharing options for: Out Of Tragedy, A United North East To Be Proud Of

I've always considered myself to be in a very good position to understand and appreciate the rivalry we have here in the north east.

For all I was born in Sunderland and support Sunderland, I was brought-up predominantly in Newcastle. Most of my better friends are season card holders at St James Park. The best man at my wedding and godfather of my son is black and white to his tremendously cantankerous core. Despite living in Sunderland now, I still to this day feel far more comfortable driving on the roads that surround Newcastle. In terms of football you are one or the other, but in every other meaningful way I am very much a child of both cities and deeply proud of that.

It's fair to say that I've pretty much seen the very worst of the famed north east divide over the years. I think most of us have, really. We've seen and heard the hate-filled spit-heavy vitriol aimed at the opposition fans on derby day. We've watched what appeared to be ripped-out seats deliberately tossed indiscriminatingly into sections of rival supporters. We've even seen an actual horse punched. As a teenager, I myself once ended up beaten and bruised when a group of lads in my local pub discovered my footballing allegiances and deemed them singularly worthy of a kicking.

We have also seen the very best of the rivalry though - or at least I thought we had until this week.

Given that I don't know when you are reading this, I don't know what the current sum of money is that Sunderland fans have raised in tribute to the two Newcastle United fans, John Alder and Liam Sweeney, tragically lost in the Malaysian Airlines disaster over Ukraine. In truth, it wouldn't matter if I did, because I've tried keeping up with it to post updates on twitter and the total increases that quickly it's impossible. 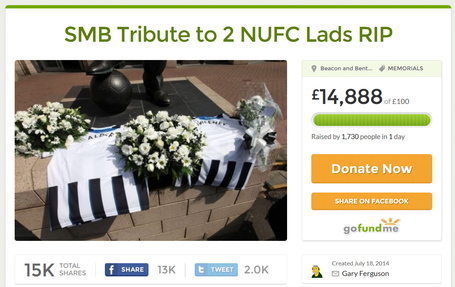 What I can tell you though is that what started off as small plea on a message board to raise £100 for a floral tribute from Sunderland fans to their lost rivals now totals in the tens of thousands.

I'll be honest here, when news first broke that two of our own were on board the doomed MH17 flight from Amsterdam, I felt a little uncomfortable seeing and receiving tweets from Newcastle fans apparently affording me special credit for putting my footballing loyalties aside to register my respects. It sat wrong with me somehow.

I mean, why wouldn't I naturally and immediately recognise human tragedy as carrying greater importance than my passion for a sport? To express surprise and special mention of which team I supported was, in my mind, to presume me to be a very bitter and small person. I was, of course, totally wrong.

Because despite all my upbringing and me priding myself on my understanding of the Tyne/Wear divide, I allowed myself to forget a very important part of it: up here, in this beautiful and almost forgotten region of ours, our land of mothballed mines, disused shipyards and an ever fragmenting heritage, your team is more than a hobby or an interest - it's your very identity. Barring the odd idiot, by referencing someone's footballing allegiances up here you are only ever looking for a way to relate to them, not hate them.

In the north east, when you meet new people your first thought isn't what their job is or what family they have, it's who they support on a Saturday afternoon. When we hear a north east accent on TV, our minds immediately turn to wondering from which side of the divide they hail.

I'm sure some people from other regions will tell me that is no different to, say, Manchester or Liverpool, where whether you are a red or a blue is important. But we are not just talking about one city here. We are talking about vast swathes of land covering hundreds of square miles of industry, commercial centres, agricultural heartlands, historic cities, towns, countless villages and multiple dialects yet all bound together by a shared heritage and language. We are basically self-governance away from being a nation in our own right.

And that's why, for all the talk of tribal rivalry and an almost impassable divide, Sunderland and Newcastle fans will always be one where it counts. We are different sides to the same coin, stuck together for eternity. You're not going to get along but you are also going to either suffer together or prosper together. It is unavoidable.

Economic hardship, neglected industry and rising unemployment doesn't hit just Sunderland or Newcastle - it hits both. The same can be said for the good times. That brings empathy, glorious empathy, the kind of which unyielding underlying mutual respect is borne that sits silently beneath the surface of the squabbles.

It is unbreakable and it is sincere, and that has never been clearer than it is right now. Neither should it ever be forgotten again.

It is that which is driving the donations ever upwards: the pride in unity and the strength in sharing. We may well stand divided on football, and I'm sure we always will. We wouldn't have it any other way and we all know it. But we stand together for so much more. It is what makes us great - and make no mistake about it, the north east is a great region. Sadly, that it takes tragedy to really show it in its truest light is also apparently our greatest curse.

IF YOU'D LIKE TO MAKE A DONATION TO THE FUND IN TRIBUTE TO JOHN AND LIAM, YOU CAN DO SO BY CLICKING HERE.