Sol Campbell, The Match That Never Happened, And The Sunderland Race Storm That Never Arrived

Sol Campbell has repeated his allegations of receiving racial abuse at Roker Park and significantly upped the ante. But how do they themselves stand up to scrutiny?

Share All sharing options for: Sol Campbell, The Match That Never Happened, And The Sunderland Race Storm That Never Arrived

If there is one thing that I have learned since I started actively writing about football over three years ago, it is to always - always - give the topic of racism as wide a berth as possible. It's not that I want to dismiss the issue, far from it, but it's a recognition that such an emotive issue must never be covered without extreme care, respect, and a deeply fastidious attention to detail. It's serious stuff.

We live in a society where the issue of racism is rightly at the forefront of the national conscience. Racism should not be tolerated, it is as simple as that. However, that is not the accused's responsibility alone. Zero tolerance to serious issues is a brilliant theory, but in practice it is only as effective as the quality of the allegation.

That all brings me to Sol Campbell. But first, a little back story.

Last March when he published and promoted his book, Campbell was asked by Victoria Derbyshire on BBC Five Live about his experiences of racism in English football. He said:

One of my earliest encounters with [racism] was at Sunderland. It was a long time ago, it was at Roker Park. I was playing for Tottenham in the FA Cup. It's in the book.

Basically, every time I touched the ball I was subjected to monkey chants - every single time. I'd never experienced that level of racism. It wasn't really recorded and nobody said much about it.

That's obviously a serious claim, and on the surface it isn't one that is easily questioned. We all know that there is the occasional idiot who attends football matches and Sunderland is not immune from that.

Only last year, in fact, a Sunderland fan was given a three-year banning order for admitting to causing racially aggravated harassment to the then West Bromwich Albion striker Romelu Lukaku. The monkey gesture was picked up on TV and by photographers, we all saw it, and we all condemned the action whilst commending the manner with which it was dealt. If Sol Campbell back in the 1990s was subjected to something similar, it wouldn't be difficult to believe at all.

The problem is that what Campbell is alleging is different and far more serious. He has since clarified the accusation to The Guardian, and said he will keep on talking about racism in football until things change.

The following extract is lifted directly from The Guardian, which can be found here:

In 1992, he graduated from Spurs' youth team to the senior side - with whom, about a year later, during a match against Sunderland, he was subjected to something much more brazen than a comment about cricket. "I played right back that day," Campbell recalls, "and every time I touched the ball - monkey chants. Every single time."

This was in 1993. I'd naively imagined that this nonsense had been shamed out of British football by then. "Mad thing is," Campbell says, "the captain of Sunderland was black."

What did he say to his team-mates at the time? "I was a youngster, what am I going to talk about?" Didn't they hear the monkey noises? "No one said anything. It was my first or second season in football. They [the opposition fans] might have been trying to put me off. But now I'm older I think, f**king hell, what was going on there? Whole sections of the crowd doing monkey chants - and no one said anything... I was young. I was just happy to be in the team. But no one came up to me to say, 'You all right, Sol?' "

So, to sum up, Campbell alleges that in 1993, every time he touched the ball - every single time - whole sections of the Sunderland crowd directed monkey chants onto the pitch. That's an extremely serious claim, one that tars Sunderland as a club and all of us who are associated with it, and as such it is a claim for which concise detail should be a prerequisite, not an optional extra.

For a start, the game in question did not take place in 1993, and for all he was "a youngster" he was an England under-21 and B International, just a year away from his full international debut; a 21-year old with more than 50 first team appearances under his belt at a top club and earmarked for the top. Back then Sunderland were a pretty atrociously bad second division (old money) team who had no business being on the same pitch as Tottenham Hotspur. Both Sunderland's FA Cup ties that year were away from home (at Notts County and Sheffield Wednesday) with Chester City, Leeds United and Aston Villa providing the home League Cup opposition.

Tottenham did visit Roker Park for a preseason friendly in August 1992, and it attracted the biggest crowd of any of Spurs' visits to Roker during Campbell's time there due to fans being given free admission to celebrate the new city status. However, Campbell did not play that day.

Campbell played in Tottenham's Premier League 4-0 win at Roker Park in March 1997, though he played as one of three centre backs and was an established England international by then rather than the youngster he claims, so it's fair to rule that one out too.

That means the only game he can possibly be talking about is the FA Cup tie in January 1995, which they won 4-1 after a pretty brutal Jurgen Klinsmann performance. It's also the only time Campbell played at Roker Park against Gary Bennett, who was the black Sunderland captain to which he refers.

That's a game I remember exceptionally well as it happens. It may have been just another game to someone like Campbell with his career and status, but to us Sunderland fans it was a big deal. It was a glamour team in town with a huge star from the previous summer's World Cup - a veritable household name in world football. This was the era of Channel Four's Football Italia, Goooooolazo and all that. The very embryonic stages of the global football glamour phenomenon we have today. It was an era at which us Sunderland fans tended to look upon rather covetously from the wilderness. Klinsmann was brilliant, Campbell had Martin Smith, our then great hope, in his back pocket, Bennett was sent off for a brilliant one-handed save on the line.

The other thing I remember clearly about it was that it was live on the BBC. That was a big deal for us too back then. That may be tough to imagine in today's world of streams and dusk till dawn television football coverage, but it was. We were used to very occasionally playing Middlesbrough live on Tyne-Tees regional TV and losing to the all too familiar soundtrack of Roger Thames telling us how depressingly bad we were.

Now, I don't discount the possibility that racism on some scale could still have gone largely unnoticed at Roker Park that day. Football still has a problem with racism now, never mind nineteen years ago. Indeed, a study by Staffordshire University claimed that between 1990 and 1997, 67% of fans in English football either witnessed or experienced racism.

However, racism to the degree that Campbell describes? We are still not talking about the dark ages here. 1995 was still two years after the Kick It Out campaign started and two years before it became a full-time organisation. Such initiatives are borne of action, not ignorance. In a society that has acknowledged a problem with race to sufficiently motivate it to commit to collective action, surely 'whole sections' of a football crowd directing monkey chants at a black player for an entire match broadcast live on national television does not slip under the radar? Had it happened as Campbell alleges, Sunderland would have been the centre of a race storm that would have scarred the club's foundations for a generation.

Yet, if it did happen, then slipping under the radar is precisely what it seems to have done. Campbell himself admits that none of his team-mates mentioned anything about it to him, not even a passing comment, and Gary Bennett has confirmed on Twitter that he can't recall Campbell receiving monkey chants from the Roker Park crowd. 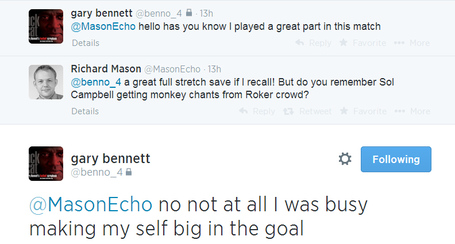 Is Sol Campbell just trying to sensationalise something he thinks can't be challenged to promote his book? He wouldn't be the first one. Does he genuinely believe what he is saying and is simply mixed up, suffering from the kind of tricks all our memories play on us over time? That's what I prefer to believe. Remember, Brian Clough allowed the death of his mother to become intrinsically connected in his mind to an unrelated event leading him to believe both happened at the same time. Emotions have a tendency to rule the head. It's just human nature. I think it's important not to judge and offering the benefit of the doubt is rarely a bad way to go.

If Campbell truly believes what he says, though, it would be the easiest thing in the world to back up. There were cameras and microphones all over the ground, and if they picked up racism on a mass scale, I and the rest of Sunderland will be at the front of the queue to condemn it. However, he - and The Guardian in truth - should be taking considerably more care in checking and double-checking their facts before throwing around such damaging and serious blanket allegations that attack the image of an entire club.

Because, right now, the fact Campbell seems to afford his own claim such little importance to do it the service of ensuring its protection from discredit by even the merest slither of research is providing the most prominent temptation to dismiss it, and the dismissal of racism is the very antithesis to what we all, Campbell included, pursue.