Red and white, stripes, Sunderland badge, bit of black... nowt to see at all really. Just a Sunderland kit.

There used to be a time when clubs brought out new football strips once every 2-3 years, whenever they could be bothered or a new sponsor or someone necessitated it, and then when they did no one was really fussed anyway. Being the dull old bore that I am, I yearn for those days.

These days, however, new strips, two usually, come out every single summer and tend to generated a lot of talk and strong opinion. Sunderland's new blue away strip was released a couple of weeks back and, in fairness, it is a bit of a corker. Now, the club have revealed their new home number for the 2014/15 season. 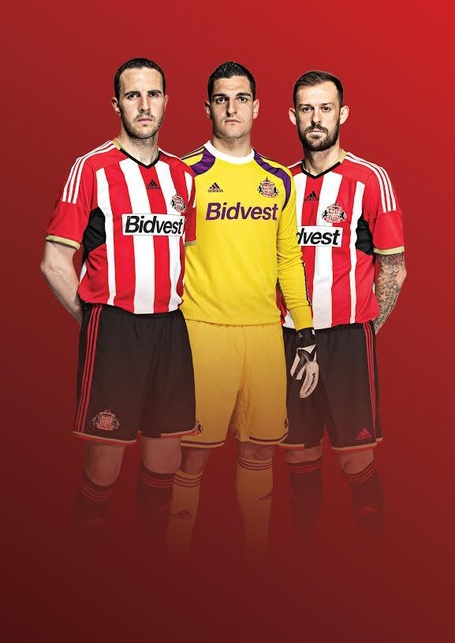 It's essentially just the one that most fans saw a leaked picture of last week, though it obviously looks much better when not viewed flat through a blurry camera phone in a darkened room.

I think it's alright personally. Not an instant classic like the away top but I can put up with it for a year. It's certainly not the horror many were claiming it to be last week. Some dislike the gold, but gold has been emblazoned on the Sunderland badge for over 15 years now, so I don't think it's really out of place at all.

The kit is to due for launch 25th July, but fans can pre-order it now from the online store.