Following on from the shocking bias shown towards home side Brazil last night in their World Cup group game against Croatia by Japanese referee Yuichi Nishimura, we at Roker Report took to our Facebook page (www.facebook.com/RokerReport - like us!) to ask our followers for examples of shocking displays of refereeing in games involving Sunderland. Below, we chose a top ten from your suggestions. Read on (through your fingers) to see what made the list...

It really was a day to forget for Peter Reid’s charges, who faced league rivals Derby County in a tie that saw referee Phil Richards have an absolute shocker and, inevitably, we lost.

The first incident came on 25 minutes, when Derby’s Darryl Powell booted Martin Gray up the arse following an altercation, only to see the Sunderland man be the one to receive a yellow card from the ref. Powell, of course, escaped uncarded.

Despite SAFC taking the lead through Micky Gray’s 18 yard strike on 35 minutes after Derby failed to clear a corner, it went downhill from there. Just a minute later the away support had their hearts broken as Derby attacked straight from kick off and Marco Gabbiadini scored – and celebrated – to even things up.

Derby continued to get the rub of the green throughout the game from the referee and, understandably, the Sunderland players’ annoyance grew.

On 55 minutes came the knockout blow. Dean Sturridge and Dickie Ord came together inside the Sunderland box after a long punt forward and the referee, who at this point was a mile away and still inside the Derby half, had absolutely no hesitation about giving the Rams a penalty for what was no more than a coming together – I think the word is ‘soft’. Martin Scott reacted furiously as he objected to the decision, but it made no difference as Ron Willems dispatched with ease. The Sunderland players continued to protest after the goal was scored as they’d felt they’d been unfairly treated with the decision.

The footage from this game is available on Youtube, oddly. Take a look for yourself. 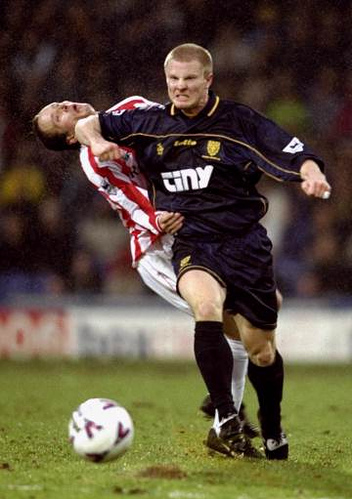 You’ll see a pattern developing throughout this article as it progresses but Graeme Poll, a man that loved to be in the spotlight, features far too regularly for my own liking.

On this occasion, Poll failed to spot an unsavoury incident that is best described as an act of grievous bodily harm.

Ben Thatcher is no stranger to controversy; in fact over the course of his career he developed an unnerving pattern of enjoyably elbowing opposition players out of a game.

In a game with Wimbledon back in January 2000, Thatcher went shoulder to shoulder with Nicky Summerbee on the right hand side of the pitch challenging for a loose ball at Selhurst Park before launching an elbow at the winger’s jaw that left him out cold and ensured that his night was over. Everyone in the ground that night saw the incident, except Graeme Poll and his assistants, apparently.

Incidents like this aren’t necessarily Poll’s fault – after all, he’s not the one controlling Thatcher’s actions – but his failure to spot the incident and play a part in condemning his actions meant that Thatcher never removed the unsavoury side of his game, even after being retrospectively banned following the match. In 2006 Thatcher replicated this act of thuggery playing in a game for Manchester City against Portsmouth when his deliberate elbow to the face of Pedro Mendes left the player hospitalised having suffered a fit on the pitch and broken jaw.

In case you don’t remember, I’ll set the scene.

Five minutes into the game and we’re awarded a free kick inside our own half. Michael Turner attempts to take it but is ordered by bumbling ref Stuart Atwell to roll the ball back to the spot where the initial incident occurred. Turner, thinking nothing of it, clips the ball backwards to Simon Mignolet with his heel and jogs away in order to allow the goalkeeper to take the free kick. Atwell, with his back to play, doesn’t realise this and as Fernando Torres races around to collect the loose ball Atwell turns and waves play on, much to the bemusement to just about everyone in the stadium. Torres squares the ball to Dirk Kuyt who taps it past Simon Mignolet to put the reds ahead – despite Sunderland never actually taking the free kick that we had been awarded in the first place.

How this goal was awarded still baffles me. It’s quite clear that Turner doesn’t take the free kick. Thankfully, Stuart Atwell has proven his incompetence on enough occasions to earn himself a demotion further down the footballing pyramid. Phew.

Martin Atkinson is another referee that has had several run-ins with Sunderland over the course of his career as a top flight official.

With Arsenal 1-0 up, Sunderland pressed to get an equaliser and it wasn’t long before we were presented with a chance. Jozy Altidore, having been pulled back by his shirt by Bacary Sagna, managed to squeeze a shot past Wojciech Szczesny which crossed the goal line before being cleared. Despite all of this Atkinson pulled the play back, gave us a free kick outside of the area instead of awarding us the goal that we had scored – proven by goal line technology, I might add – and only gave Sagna a booking despite him denying a goal scoring opportunity which, in any other game, would have gotten him a red card. Utterly bizarre. We went on to lose the game, remained bottom of the league and had Paolo the mental Italian removed from the technical area (he later claimed he asked to be sent off). Awful.

As far as incompetent refereeing performances go, the display from Steve Bennett in this tie from December 2007 was pretty special. Bennett's ineptness ensured that the Sunderland fans went into the Christmas period with a sickening feeling at a time when picking up wins at home was crucial.

The referee spent the duration of the game calling every just about every major decision in favour of the Villa players and in particular Ashley Young, a Tom Daley impersonator that has proven throughout his career that it takes no more than a weak fart to knock him on his backside.

After a scrappy tie that never felt like ending, Danny Collins thought he’d won the three points for the lads deep into injury time with a header at the far post which beat Villa 'keeper Scott Carson and hit the back of the net. With the Sunderland fans going mental in the stands and the players celebrating what they thought was a winning strike, up stepped Bennett who adjudged that Collins had fouled the Villa goalkeeper in the lead up to the goal.

Replays afterwards proved that the ref had made a right old pigs ear of the situation and had cost Sunderland the win they had earned. Manager Roy Keane pulled no punches when interviewed after the game by the BBC, saying:

"It's the Sunderland fans I feel sorry for - they deserve better. It sums up (the referee's) day. He was giving everything against us and to say we're disappointed would be an unbelievable understatement. You could sense he was waiting to blow his whistle. It would be nice to see him later. We started well and managed to score from the set piece. Villa are a good team and put us under a lot of pressure and we had to defend very well. We always felt we would create something special in the last 10 minutes and that's what we did. We did score and but for the ref we would have had three points."

I’ll let the image do the talking here - special thanks go out to Kevin Friend. 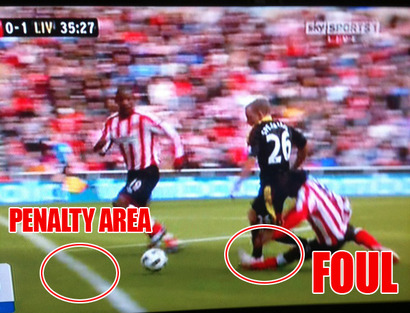 Much like Jay Spearing at number five, it was a contentious penalty involving a Liverpool player going down outside of the area that send the Sunderland fans home fuming.

It was a game that came hand in hand with controversy. Both managers were arguing on the side lines; there were eight yellow cards dished out between the two teams; Kevin Phillips was denied a blatant penalty when he was almost snapped in half by Stephane Henchoz in the box; Don Hutchison was booked after being fouled himself by Gregory Vignal, who rolled around on the floor as though he had a broken leg only to rise to his feet seconds later; and Jari Litmanen should have been sent off for belting Stephan Schwarz off the ball but somehow got away with just a yellow card. It really wasn’t our day and we got kicked all over the park.

The hapless Graham Barber awarded the Merseysiders a penalty with little over ten minutes of the game left to play. With Sunderland leading through a Don Hutchison strike from earlier in the half, Gary McAllister did his finest impression of a sea lion and dove a considerable distance from outside of the area into the box that somehow only managed to fool the referee and his assistants. True to form, Barber awarded the ‘bigger club’ a penalty and Litmanen stepped up to slot home his spot kick to rob Sunderland of a deserved victory. I believe ‘shafted arl owa’ is the term.

What is it with balding midfielders from scouse teams doing us over with penalties?

On this occasion ex-copper Howard Webb - the man who was awarded the chance to referee in both a Champions League final and a World Cup final – failed to spot Leon Osman tripping over his own feet before awarding our opposition a penalty kick, which of course was dispatched with ease. Webb seemed to take an age to make a decision and didn’t take into account that his assistant on the side line did not see it (he didn’t flag for a foul) before handing the point to the Toffees.

Such was the impact of Webb’s performance that day that every time his name crops up against a Sunderland fixture the people of Wearside board up their windows and doors, refusing to leave the house until it is all over.

I’m sure I don’t really need to remind you of what happened here, but I will.

It was enough to make the normally unflappable Gustavo Poyet tear off his coat like the Incredible Hulk, which says it all – a truly shocking decision and one which was inevitably overturned by the FA. Referee Kevin Friend received a two game ‘suspension’ himself but the damage was already done, we’d lost the game.

If there was ever a refereeing performance that summed up the favouritism that Manchester United used to receive on a regular basis throughout the Fergie years it was this one.

Let’s start with incident number one. When Andy Cole was played through on goal he punched the ball before taking his shot on – something Poll failed to spot.

Incident number two. Having just witnessed Cole handling the ball before scoring the goal, just like everyone else in the ground had, Micky Gray is sent off for pointing it out to the incompetent idiot that was supposedly in charge of the game.

Incident number three. Andy Cole goes face to face with Alex Rae before motioning a head-butt, which causes a load of pushing a shoving that sees both men sent off - to this day I’ve no idea what Rae actually did to get himself a red card.

Add to all of that the fact a streaker entered the field of play, an angry fan had to be restrained and prevented from entering the pitch and Stan Varga was allowed to take a free kick it is safe to say Poll had totally lost control of the game.

You can watch the highlights from that match here, if you dare:

Got any more suggestions? Leave your comments below this article.

Which was the worst of the ten decisions we've chosen? Vote now in the poll below.