Modelled on SAFC.com by Connor Wickham, John O'Shea and Adam Johnson, this season's offering seems to have gone down well on both Twitter and Facebook amongst Sunderland supporters. 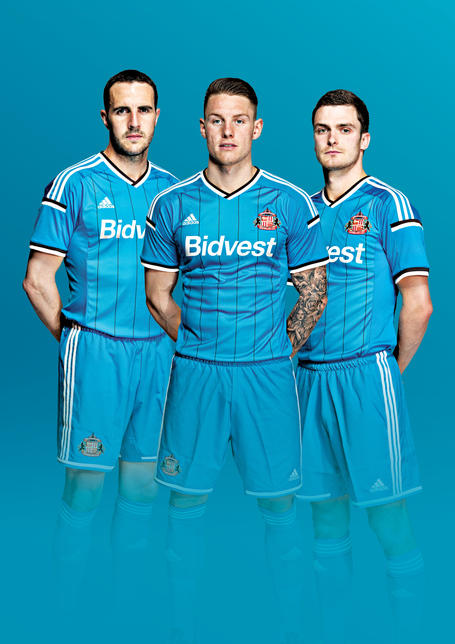 Sky blue with black pinstripes, Adidas have gone with a more retro-style collar this time around with both the club badge and the Adidas logo being embroided as opposed to the vinyl style transfer we've seen in the past. The logo of our principle sponsors Bidvest, however, does appear to be a transfer.

The shorts are sky blue with a white trim, as are the socks.

The club released the following information to supporters:

Sunderland AFC has unveiled its new away kit for the 2014-15 Barclays Premier League season, which will launch on Friday 27 June, 2014.

Gus Poyet’s side will play in a new ‘sharp blue’ kit away next season, manufactured by adidas and sponsored by principal club partners, Bidvest.  Dark grey pinstripes lend a retro feel, while grey and white trims complement the iconic white adidas stripes. The shorts and socks are also ‘sharp blue’, set off by a white trim and adidas detailing.

The kit was modelled in a recent photoshoot by Black Cats stars Connor Wickham, John O’Shea and Adam Johnson. Speaking about the change strip, Connor said: "It’s a really striking kit. I love the bold, bright colour, the design is different to previous kits and I’m sure our fans will like it."

Sunderland’s stylish new look is sure to be popular, and fans can pre-order their kits now in the club’s stores at the Stadium of Light, Debenhams Sunderland and The Galleries, Washington.

The new away kit will be officially released on June 27, 2014 and fans can place their orders now for launch day delivery, online at www.safcstore.com or from official SAFC stores, located at the Stadium of Light, within Debenhams, Sunderland or at The Galleries, Washington. Free standard UK delivery is available on all orders over £50.

‘Click and collect’ is also available free of charge, whereby fans can order their shirt to be delivered to the Stadium of Light store or The Galleries, Washington to collect in person on launch day. UK pre-orders (non-personalised) must be placed by midday (BST) June 23 for launch day delivery on June 27 (including click & collect).

All in all it's a fairly nice offering and it should go down well with the fans. The downside, as always, is that it's rather pricey, but it's probably the nicest away kit we've had from Adidas since they began producing our kits. We approve.