Summer is long! Plenty time to do other stuff to do for a bit.

For those unfamiliar with Split (and to those people, where have you been?), it is Sunderland's own music festival. We've been pleased to support it all summer and now it's time for an update.

Specifically, the line-up has now been fully confirmed (see below) and it's looking very impressive. With prices at just £30 for the day, £50 for the weekend, and under-11s admitted free with a paying adult, there really is no excuse to not get yourself to Mowbray Park on the weekend August 9 and 10.

Not only that, but school-goers over the age of 11, including sixth formers, can also enjoy a £10 discount on all tickets making it affordable for just about everyone who loves their music.

Split Festival organiser, Martyn McFadden explained the initiative: "School's almost out for summer and the kids need something to look forward to that's happening locally, so we feel it's the right time to launch this concession scheme. Before Split youngsters had to convince their parents to let them travel to Leeds Festival to get their first taste of a fessie, but now they can see internationally renowned bands in their own back yard and this year we have our strongest line up yet. Split 2014 will be the biggest contemporary music festival ever to be held in Sunderland and we don't want the under 18s to be priced out of it."

Schools discount tickets are only available online via http://www.split-music.co.uk/festivals/school.php and also in person from Pop Recs on Fawcett Street, Sunderland.

As for the full and confirmed line-up itself, let's hand the floor over to the actual organisers:

Ross Millard, who curates the event, had this to say: "We've had a lot of people request the booking of Simon & Oscar of Ocean Colour Scene for this year's event. I think they'll bring some big, festival singalongs to Split this summer. Simon's voice is one of the most recognisable in modern music, so it's great that he'll be belting out the hits across Mowbray Park in August. It's also great to get Tom Vek up to Sunderland for Split - our audience appreciate artists like Tom who have retained a DIY ethic. Off the back of his new album I'm looking forward to seeing a great show. Stage 2 is going to be seriously hard-rocking at Split this year."

Festival organiser, Barry Hyde, added: "With forty bands, across three stages, the line-up this year is our strongest and most eclectic yet, it's the most crucial aspect of the whole festival and now it's all complete I can't wait to see it happen."

The Sunderland based event is being brought forward in the calendar, from their normal September time slot, right to the middle of the summer, with Split 2014 happening on the weekend of August 9 and 10. For more info see www.splitfestival.com

Split Festival will announce their Family Zone and Beer and Food Festival information in due course... For further info and interview requests contact press@splitfestival.com or visit www.splitfestival.com 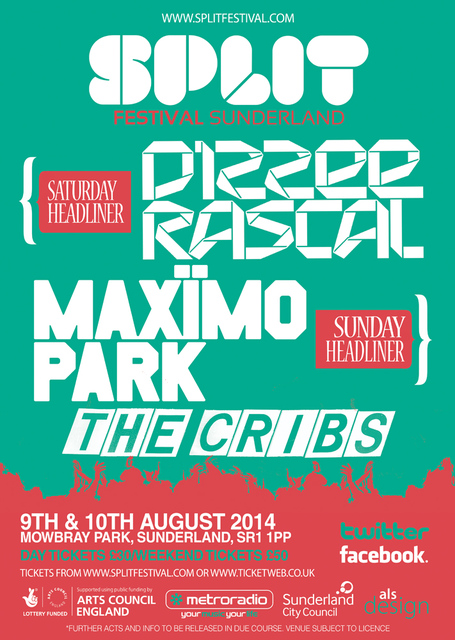