Quinn: Sunderland On Verge Of Greatest Of The Great Escapes

As per usual, Quinny articulates stuff we are all thinking about Sunderland much better than us.

Share All sharing options for: Quinn: Sunderland On Verge Of Greatest Of The Great Escapes

If Sunderland can get the point they require from the remaining two games to ensure survival, they will have pulled off the greatest escape in Premier League history. That is the view of Niall Quinn, and it's a difficult one with which to argue.

Speaking after playing -- and scoring -- for Sunderland in Jody Craddock's testimonial game at Molineux, Quinn said:

It's the greatest escape of all the great escapes.

I hope now they can get this last point. This is Sunderland remember, so we won't take anything for granted! But they're very close to it now.

The way things have worked out in the last few weeks have been fantastic.

I feel I was right to question Gus Poyet's attitude before the Man City game. But whether you call that a speed-wobble on his part or what, he's been terrific.

To get his players to respond over the last few weeks has been exceptional.

Great escapes are a little bit like derbies - everyone thinks theirs is the biggest and best. There are actual statistics that back up Quinn's claim here, though. Sky Sports' Monday Night Football took a look at the numbers and discovered that, as things stand now, no one has pulled off a better points/game record to escape the drop. 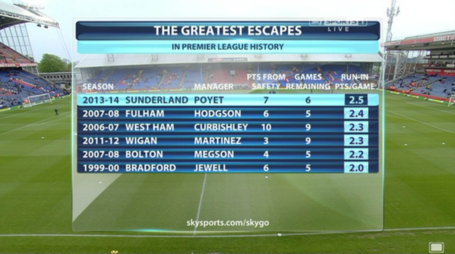 It's obviously not just the amount of points either, but the quality of them. Four have been won away at title contenders, three away at the champions, and three in a do-or-die must-win game against a relegation rival.

If Poyet can complete the job and pull this off, it will truly be remarkable.