Gus Poyet has got his 'player of the month performance'.

Connor Wickham has been named the Premier League player of the month for April after hitting five crucial goals in his last three games to wrestle Sunderland's Premier League fate back into their own hands.

Before the youngster netted his first of this run, to equalise against Manchester City at the Etihad, the Black Cats had looked destined for the drop having fallen seven points off the pace at the bottom. Now, Wickham and his team mates know that one win from the remaining three games will likely be enough to secure an eighth successive season of Premier League football on Wearside.

Back in March, Gus Poyet claimed that Wickham, who was recalled from a loan spell at Leeds, could be the 'bang' his side needed in the run-in, and he has certainly had a huge impact. Now let's hope that Poyet's other claim that a 'player of the month' blast in form from someone would keep the club up proves similarly prophetic.

Congratulations to Wickham, and fingers crossed he has a few more goals in him before the end of the season. 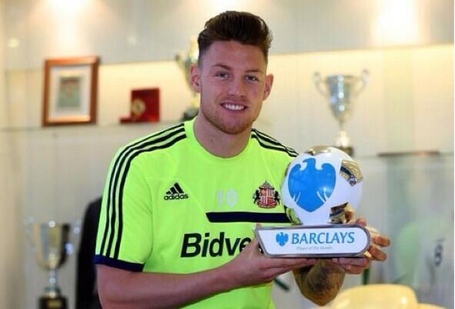