Defender Says His Goodbyes - Cameroon International To Replace Him?

Carlos Cuellar appears to have said his goodbyes to Sunderland through social media, could a defender from Rennes be set to replace him?

Share All sharing options for: Defender Says His Goodbyes - Cameroon International To Replace Him?

With Gus Poyet saying he still hopes to retain at least 3 or 4 of the players who are set to leave Sunderland due to either being out of contract or coming to the end of their loan deals, it appears as if Carlos Cuellar will be one of the players leaving the Stadium of Light permanently.

Speaking on his official Instagram account, Cuellar posted a picture of his car, his intended journey back to Spain and thanked the club for his two years at the club; 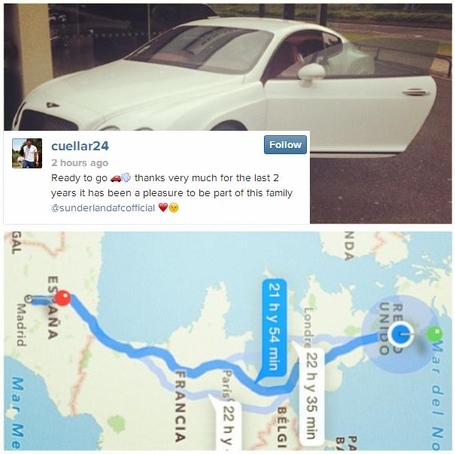 Cuellar joined Sunderland on a free transfer from Aston Villa in the summer of 2012, when his former Villa manager Martin O'Neill persuaded the Spanish defender to make the switch to the North East. Although a regular during his first season at the club, when he scored his only goal in a 3-1 away win at Fulham, Cuellar was rarely seen this season thanks to a combination of the good form of John O'Shea and Wes Brown, injuries and falling out of favour.

The 32-year-old made a total of 33 appearances for Sunderland, with the 3-0 win at Newcastle United in 2012-13 being a particular highlight.

With Cuellar set to leave, he could be replaced by Rennes central defender Jean-Armel Kana-Biyik. The 24-year-old Cameroon international, who also appeared at youth level for France, is expected to leave the club after he was suspended for getting into a fracas with the club's Ultras.

Kana-Biyik is valued at around £4.5m, has also been linked with Newcastle and is the son of Andre Kana-Biyik who was sent off in Cameroon's infamous opening game win in World Cup Italia '90.