Bet you're all in too good a mood to tell us we are wrong this week...

Shaky start after his midweek blunder but grew in confidence and pulled off some important, if routine, saves.

Occasionally allowed crosses to come into the box a little too easily but solid once again and improving all the time. Starting to look like the player Gus Poyet told us he was.

This was the good O'Shea, the one we want to see. If this was the O'Shea we got every week, he'd be a far more popular player.

Warrior. Brown has reacted to his Spurs stinker admirably with three very good performances since, with this one being the stand-out.

His best game in a Sunderland shirt? I think so. Defensively he was solid and he also contributed going forward. Fine performance.

Catts has been the main man for Sunderland over the last couple of weeks but he wasn't at his best here. He started nervously and never quite found his passing range.

A safe pair of hands in the middle but nothing progressive or creative. Suppose I've just summed him up generally, though. Nothing to see here.

Pretty average but can't be the hero every week.

A wonderfully cool penalty. Did anyone doubt he was going to tuck it home? Not me. Not for one second.

Added another goal to his growing collection and battled through a knock to help the side. Well played.

Slightly inflated score perhaps, but the American was the matchwinner.

Ddidn't contribute a lot but seemed to bring some calming big-game experience into the Sunderland side when needed.

Needs to work on his 'hold it in the corner' play book!

Man Of The Match: Seb Larsson

He's a player we are happy to dish out a little stick to but you have to take your hat off to him today. Tireless in the midfield and influential. When he leaves this summer, him standing on the touchline having been subbed directing everything like an animated assistant manager in full kit (see pic) may well be my favourite memory of the Swede. Bless him. 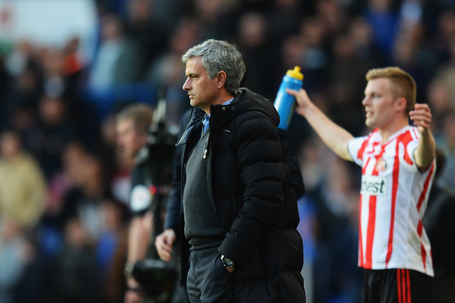 Chelsea 1-2 Sunderland: How It Happened