Sunderland have released further details of Season Card pricing, deadlines and payment options for the 2014-15 season.

Sunderland have today released further details of the Season Card pricing for next season. It has already been revealed that they will be reduced significantly, however now there are details of rewards and payment options;

Adult seats for the new campaign are available from only £370 and supporters over 65 will pay £270. Young people under 22 years of age have had the cost of their season card reduced by £90 to only £190 and junior supporters aged under 16 will pay just £69 for a whole season.

Affordable football remains top of the agenda at the Stadium of Light, with a special package in the popular ‘Family Zone' for an adult and a junior only £395. Additional children (aged under 16) can also be added to this package for £25 each.

Supporters can also spread the cost of their season card over eight months, free of charge, with the club's interest-free payment option.

The deadline to sign up and take advantage of the price reductions is 5pm Friday 11th April, 2014.

As well as reduced prices, the club will continue to give its season card holders access to SAFC Rewards, an exclusive scheme affording a wide range of discounts and special offers.

The club's free payment scheme allows fans to pay for their season card with four Direct Debit payments in May, August, October and December. This is available to supporters renewing an existing seat or buying a new season card before 5pm, Friday 11th April, 2014.

Season card holders can take advantage of the ‘Wear On Our Way' travel pass, in association with Network One. The special pass costs just £25 for the entire 2014-15 season and includes travel to and from all home Barclays Premier League and cup games at the Stadium of Light, from anywhere in Tyne and Wear, up to three hours before and three hours after the match. See www.safc.com/safclegends for more details.

A raft of additional benefits are also available to season card holders with the exclusive SAFC Rewards scheme. Season card holders can enjoy hundreds of pounds worth of discounts, incentives and special offers. Further details are available at www.safcrewards.com throughout the season.

DEADLINE TO RENEW OR BUY

Supporters can take advantage of the special purchase prices from tomorrow (9am, Wednesday 5th March) and the deadline to renew existing seats or to purchase a new season card at the special prices is 5pm, Friday 11th April, 2014.

Existing season card holders are also reminded that their current seat will not be held for 2014-15 after the April 11th deadline. The Direct Debit method of payment is not available after this date.

Existing season card holders will receive their renewal packs by post in the coming days. Supporters are asked to read their packs carefully to check if they are included on the automatic renewal scheme or if they need to re-apply.

Online renewals and new purchases by credit or debit card can be made via the club's official website, www.safc.com/legends 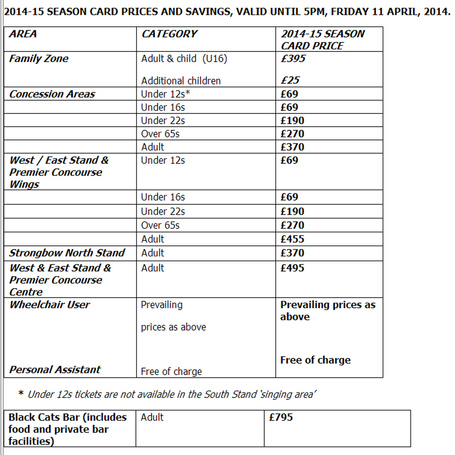 Further information is available at www.safc.com/safclegends by telephone, 0871 911 1973 or in-person at the Stadium of Light ticket office.