Few people gave Sunderland much of a chance ahead of Wednesday's trip to an in-form Liverpool, but some smart tactical shuffles by Gus Poyet almost saw the Wearsiders nick a valuable point from Anfield.

Share All sharing options for: Talking Tactics: Liverpool (A) 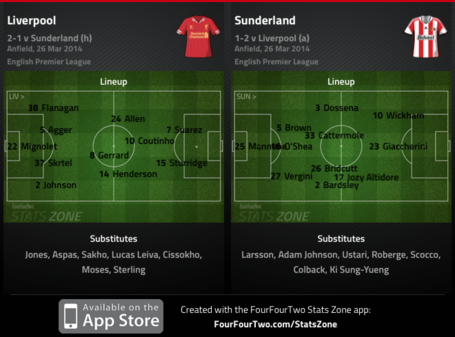 Pre-game rumours were rife that Gus Poyet would look to change things up following Saturday's miserable 0-2 loss at Norwich City, and so it proved as the Uruguayan opted for a three-man central defence for the first time this season. Santiago Vergini joined John O'Shea and Wes Brown, with Phil Bardsley and Andrea Dossena (covering for the suspended Marcos Alonso) expected to provide the side's width from full-back.

The reasoning behind this shift was obvious: Sunderland were facing the best strikeforce in the league. The chances of the Wearsiders coming out on top in a 2 v 2 battle with Luis Suarez and Daniel Sturridge were almost nil; the selection of Vergini made perfect sense.

So too did the choice to provide a wall in front of the defence in the shape of Liam Bridcutt and Lee Cattermole. Ahead of them, Emanuele Giaccherini was asked to link play between defence and attack. The diminutive Italian was entrusted with acting as a channel through which play could flow and, hopefully, see Jozy Altidore and Connor Wickham flourish up front.

Gus Poyet's plan was clear from the off: seek to nullify the league's top scorers in the opening half, refusing to let them get a head of steam up, then look to see if anything can be won in the latter stages of the game. 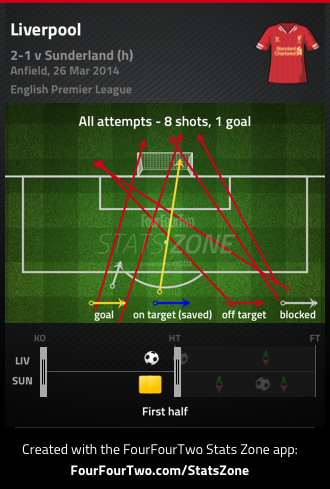 Despite entering the break one goal down, Poyet's plan - in a defensive sense - was executed almost perfectly. Liverpool managed not a single shot from inside Sunderland's area in the opening 45 minutes, while Steven Gerrard's free-kick to open the scoring was their sole effort on target.

Arguments about the aptitude of the wall or Vito Mannone aside, it should be remembered that the free-kick from which Liverpool opened the scoring only came about due to individual errors. Lee Cattermole found himself harried into trouble by Philippe Coutinho, before Vergini was fortunate not to see red for bringing down Suarez. Still, the actual system deployed by Poyet worked fine when defending.

The problem came when Sunderland managed to wrest possession for themselves. Poyet's plan, while embarked upon with defensive solidity in mind, was also geared towards moving the ball forward through central areas, with Giaccherini expected to be a key player.

Instead, the Italian international was woefully absent. Whenever Cattermole or Bridcutt picked up the ball (which in themselves were sparing moments), they were unable to find their teammate who, despite playing in a side with no wide midfielders, completely failed to find any meaningful space. 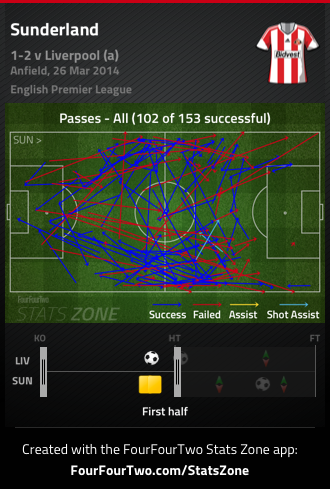 As a result, Sunderland's passing accuracy in that opening half was a miserable 67%. Scarcely anything went successfully through the middle, with the only infrequent forays forward coming when either Altidore or Wickham moved out wide effectively - rarely did this happen - or Dossena or Bardsley managed to get forward. The latter proved unsurprisingly better at this part of his task, but Sunderland's impotency on the ball in the first half was disappointing, and made their ability to keep Liverpool so quiet at the other end all the more impressive considering the home side's abundance of possession.

Almost exactly on the hour mark, Poyet moved into the second stage of his game plan. By this time, Sturridge had already doubled Liverpool's advantage with a long range strike, albeit one that was deflected. Again, this did not show up any inadequacies in the manager's system; it was simply a well-hit strike, and Sunderland's use of three central defenders (even one, Vergini, who had an awful game) meant that the much lauded forward pairing of the home side were unable to be anywhere near the threat they have been in recent weeks.

That aforementioned second stage saw Poyet introduce his side's two most creative players, Ki Sung-Yueng and Adam Johnson. Many afterwards bemoaned their lack of inclusion from the start, such was the impact of the pair. The issue with this is that, had they played from the start, their effect on the game would not have been so great. Ki and Johnson offered fresh legs and ideas in a way they could not have from the start. 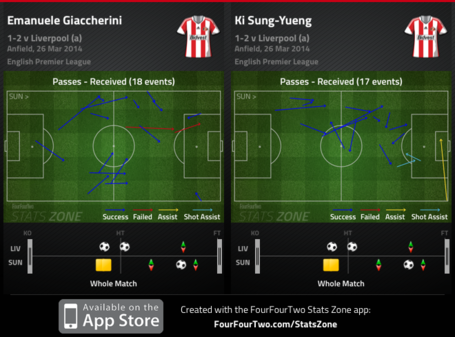 Ki's influence was startling, especially when compared to ineffectual display of the man he replaced, Giaccherini. The South Korean managed just one less reception despite being on the pitch for half the time of the Italian and, of course, weighed in with the goal that had plenty in Anfield desperately hoping for the final whistle as the game entered its latter stages.

Ki, along with Johnson, brought a sense of purpose to proceedings, shifting the ball forward with speed and craft that had been lacking from Sunderland in the opening hour. In addition, their prevalence higher upfield saw Jozy Altidore - who had been utterly dreadful beforehand - become much more involved, albeit with the American still a fairly bumbling presence up front. 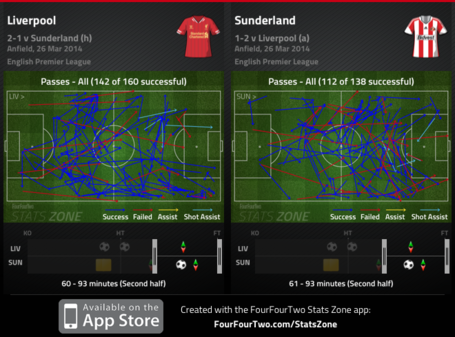 That final half hour saw Sunderland extremely busy in central areas outside the Liverpool penalty box - territory that had effectively been a no-go area for the Black Cats in the opening half. This movement upfield did of course invite the hosts to do what they are best at and counter-attack in the hope of a third and crucial goal but, aside from Sturridge rattling the crossbar, Sunderland coped quite admirably with this too - John O'Shea, in particular, was solid.

As it were, they were unable to find a second goal despite their pressure, but it is these sorts of displays that make fans and observers alike believe their is hope in the battle against relegation yet.

Gus Poyet got his tactics spot on on Wednesday evening. To look to dominate possession and move high up the field against a side with the pace and counter-attacking prowess of Liverpool would have been suicidal. Instead, Poyet was happy to cede possession - the only disappointment was how poorly Sunderland passed the ball when they did get it, and how Wickham and Altidore up front were unable to show any fledgling signs of a partnership developing.

Despite Santiago Vergini's very poor showing, the decision to deploy three central defenders worked excellently, largely limiting the league's most potent strikeforce to long-range shots. Of course, Daniel Sturridge scored from one of these, but even that was aided by a deflection, and may well have been avoided if Andrea Dossena were quicker to realise the danger.

Sunderland's lack of threat from their strikers remains a worry, but this was a good performance against very good opposition. It was the first time in seven league games that Liverpool had not scored at least three goals - no mean feat when we consider the Wearsiders' penchant for defensive howlers this season.

The issue now, as has been the case all season, is whether they can replicate this good showing against the teams around them in the fight at the bottom. Whatever the case, Gus Poyet proved himself again on Wednesday as Sunderland's most tactically aware manager in a very long time - they will now hope he can discover a cure for what has ailed them at the Stadium of Light for much of the past year.