Gus is already planning for Sunderland's future, regardless of club's fate this season.

Gus Poyet has insisted he plans on being Sunderland manager next season regardless of what division the club is in, and has insisted that stability is the key to the club finally breaking the shackles of the over-reliance on Ellis Short.

Asked about the club's recent financial results which once again presented a loss, Poyet told reporters:

Will I be around next season? I have the contract. If we lost the next 11 games then maybe not! Me, I just try to plan for what my contract says, and even if I don't know if I will be here in two or three years, I plan ahead just in case.

I do feel that responsibility [of staving off the financial hardships of relegation]. I love responsibility and pressure. I want to make sure that we start to make money, or not lose as much money.

It is important that we pay attention to the U21s and U18s and have stability so that you don't need to keep sacking managers, paying them off, starting from zero and rebuilding; and having a sporting director and then, again, having another sporting director - that's how also you lose money.

Okay, so a manager essentially coming out and speaking against sacking him is hardly groundbreaking. Poyet seems to get it though. He seems at least willing to accept that there are no quick fixes at Sunderland.

How much responsibility will he take though if the club does go down?

When I took over, we were dead. Dead. Will I have failed if we go down? I will take it. I will be responsible. But I am not going to defend what went before, in the last two years, because that would be going against myself for no reason.

"We have done a lot and I think we will finish the job. I will take responsibility for what I have done. If we make 40 points and we go down, which means I will have got 39 points in 31 games, I am responsible. But there is a limit [to my responsibility]."

In a way, I almost just want the events of this season to have a big line drawn under them, regardless of what happens. The whole campaign has been undermined by the fact we gave everyone else a head-start. This squad was never as bad as the start of the season suggested. It's far from ideal but there is plenty of quality in it.

Since then circumstance and pressure has played a huge role in what has followed. I know people will describe that as excuses but it's not. I'm not excusing anything, merely trying to offer an explanation as best I can see it.

We've done this table before but it's worth updating and showing again. If the Premier League started on the day Poyet was appointed, this is how it would look: 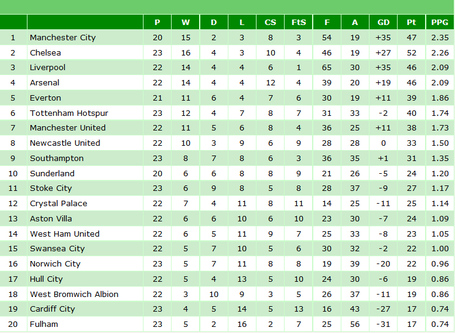 Come May, that isn't the table that will decide who goes down and who stays up, of course, but it's worth showing because it displays the true value of Poyet to Sunderland.

Yes, yes, we could show you a similar, or even better table showing Martin O'Neill's start as Sunderland manager and look how that turned out etc etc etc. Granted, Poyet can offer no guarantees but he can and has offered a little genuine cause for optimism. It's just tough to feel it during the throngs of the relegation scrap.

I'd personally be quite excited about what Poyet could do with a little time here. If he is as committed as he claims, I don't think it's anything other than tremendous news for the club.