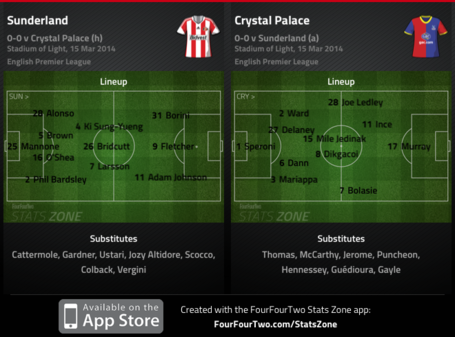 Having made wholesale changes to the side that went down 0-3 at Hull City last weekend, Gus Poyet welcomed first team regulars back into the side. By far the biggest surprise was the selection of Steven Fletcher in the central striking role; Fabio Borini, excellent there a fortnight ago at Wembley, found himself once again shunted to the left wing.

Following his disastrous second half showing down at the KC Stadium, Lee Cattermole found himself benched, with Liam Bridcutt given the deep central midfield role. Around him, Ki Sung-Yeung and Seb Larsson were given "shuttling" roles, whereby they were expected to drive play on from midfield and help supply the side's creative wide men.

Sunderland have faced numerous games exactly like this one already this season. Crystal Palace came with the sole intention of blocking gaps at the back and going home with a draw, only seeking to go forward when rare opportunities for counter-attacks arose. It was the same tactic used by Norwich City and Aston Villa on Wearside this season, both of whom Poyet's men failed to beat. 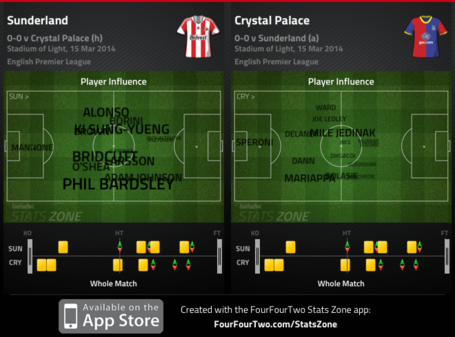 With Pulis' side sitting with ten men behind the ball and turning the game into a very scrappy affair, there was never likely to be space in the centre of the field. Palace filled the centre with bodies and asked Sunderland to break them down.

Just as had been the case in those other games, Sunderland's own plan did little to aid their cause. The deployment of two inside forwards meant the only real space for the Black Cats to exploit would could via full-backs Alonso and Bardsley pushing forward to join the attack. This would potentially leave Sunderland susceptible to counter-attacks, but in truth neither of them were impressive in an offensive sense, struggling to create anything meaningful from wide areas. 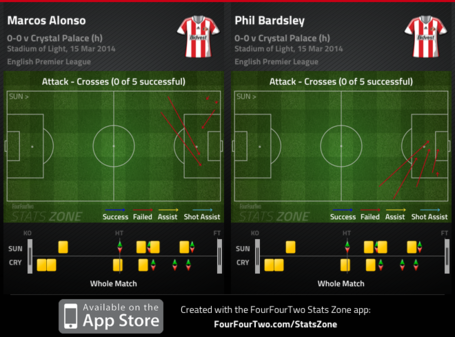 Of course, it is not really fair to expect two defenders to act as the side's main creative outlets. Borini and Johnson were relatively bright in the opening half, but the introduction of Jozy Altidore after the break saw a worrying shift to a more direct style of play. Sunderland were still struggling to break down their visitors in the opening half, but the decision to send in more long balls in the second half played into Palace's hands.

The crux of the issue is that the home side did not have - and do not have - a genuine attacking midfielder. Obviously, with Palace playing so deep and compact, there was limited space to exploit between the lines. But Ki and Larsson offered almost nothing to the attacking cause, refraining from attempting through balls and generally opting for the easier sideways options. Indeed, the only incisive pass of the whole game came from Wes Brown when he found Borini free in the second half, and the Italian promptly rattled the bar with Sunderland's best chance of the game.

By far the most concerning problem with Sunderland at the moment is the complete lack of goalscoring threat displayed by their strikers. The decision not to play Borini up front in the first half (he did move to a more advanced role after the break) was baffling given that he is one of the few players who actually looks like scoring. Steven Fletcher would be taken off injured at half-time, but in truth neither he nor Jozy Altidore have looked like finding the net for a very long time. 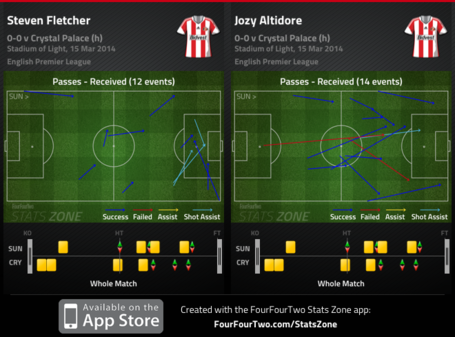 The reasons behind the malaise of each striker are different, and would take far too long to detail here. But, in brief, the core of the issue is that neither Fletcher nor Altidore fits into the model that Gus Poyet has employed since arriving at Sunderland.

For Fletcher, his injury is clearly a factor. Yet his link-up play seems to have diminished greatly, as have his general energy levels, and his movement is inadequate in a side that is already sorely lacking in creativity. That said, despite the scarcity of his touches on Saturday, he made half of his receptions in the opposition penalty box, carving out three chances, albeit none of which came to anything worrying for opposing goalkeeper Julian Speroni.

As for Altidore, the American striker struggles to impact games in any real sense. This is not entirely his fault. On Saturday, the reversion to direct balls forward did him no favours, nor did the lack of any midfielders getting beyond him - he has proven himself adept at linking up well when teammates do that.

But, even allowing for these factors, it remains that Altidore himself is a poor striker (in this system, at least). He is too reactive and spends too much of his time far away from the opposing goal, in positions where he poses little or no threat. As shown above, he received the ball just once in the Palace area on Saturday. On that occasion, he did manage to fire a good shot away, but it was very much the exception rather than the norm.

Ultimately, this was an entirely predictable result. Tony Pulis' own special brand of anti-football was always going to be the order of the day, and Sunderland's inability to overcome it was maddening. Gus Poyet is hamstrung by the inadequacies of his squad, but it would still have been nice to see a fresh approach applied to games.

As it were, the only positive was that Sunderland did not fall victim to a late sucker punch. They now move on to another crucial game at Norwich this coming weekend.