Midfielder Speaks Out On Spain Move

Alfred N'Diaye has given an interview explaining his move to Real Betis and whether or not he will return to Sunderland.

Share All sharing options for: Midfielder Speaks Out On Spain Move

After ending his loan spell at Turkish side Eskisehirspor early, Alfred N'Diaye joined Real Betis on-loan until the end of the season last week. He made his debut at the weekend in central defence and was man of the match as the La Liga side won their first game since September.

Speaking to the official website of Real Betis, N'Diaye said he was unsure where his future lies after this season;

I do not know. It's not the time to think about that. It was an opportunity to join a club in one of the most popular leagues, but I do not know if I'll stay or go.

The 23-year-old also explained what was behind his departure from Sunderland;

The truth is that I played every game with Sunderland but [Paolo] Di Canio brought his own players, he had their confidence and so I returned to Turkey with [Ertugrul] Saglam, who had coached me before.

He was also asked about the fact he looked 'chubby' on his Betis debut, something he denied;

It's a story that has always emerges online, but when you see me playing they say I'm fine.

I've always been that way and my average mileage per game while playing in midfield is 13km.

Finally he was asked about the famous photo of him standing tall at a Leighton Baines free kick; 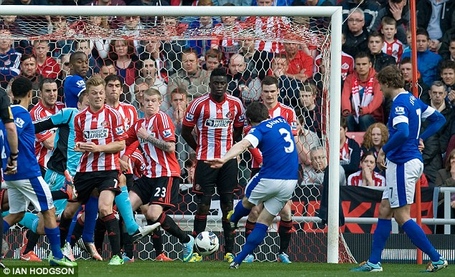 Every day is different, but in games I will always give my best and be aggressive. I will not flinch in a wall. We have two legs, two arms and if you get hit nothing happens.

The Senegalese international midfielder also promised the Real Betis website that if they give him two months then he will give his next interview in Spanish, despite being unable to speak the language as yet. A promise that shows what an intelligent and driven person N'Diaye is and just the sort of attitude that endeared him to the Sunderland faithful.