Sunderland completed a second consecutive 3-0 destruction of Newcastle United in the Tyne-Wear derby on Saturday. While the shock of victory may not have been so great as it was last April, this win was far more convincing for the Wearsiders.

Share All sharing options for: Talking Tactics: Newcastle United (A) 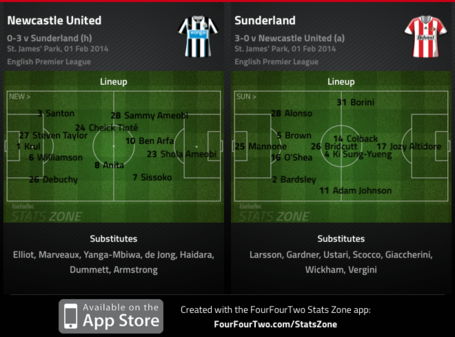 Having alluded to a Liam Bridcutt debut on Friday, Gus Poyet wasted no time in pitching his latest signing straight into the deep end, handing him a defensive midfield role, with Seb Larsson making way to the bench. As a result, Ki Sung-Yueng was able to move into a slightly higher position, but it was in fact Jack Colback who was selected as Sunderland's most attacking midfielder. Up front, Jozy Altidore again led the line, with Fabio Borini and Adam Johnson effectively acting as inside-forwards behind him.

For Newcastle, Alan Pardew made the odd decision to play just two central midfielders, with Hatem Ben Arfa operating "in the hole" behind lone striker Shola Ameobi. Shorn of Yohan Cabaye, Pardew selected Cheik Tiote and Vurnon Anita as his engine room, in a strange move that had a huge bearing on the game's outcome - for all the wrong reasons from a Magpie perspective. 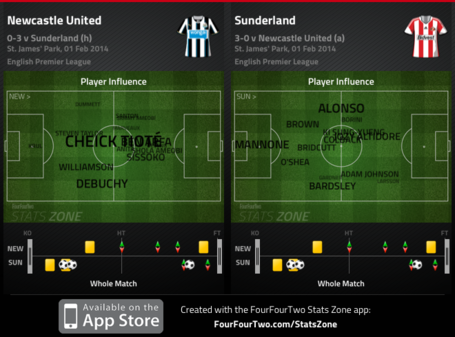 The contrast in styles could not have been more different here; where Sunderland looked to play their measured, possession game, and also gave a heavy focus to playing on the counter-attack, Newcastle's approach sought to get the ball forward to Shola Ameobi as quickly as possible.

As a result, the home side scorned the use of the wings almost entirely. With Davide Santon always looking to cut inside and Matheiu Debuchy struggling to make a meaningful impact, the hosts primarily focused on long balls up to Ameobi. Otherwise, they relied too heavily on Hatem Ben Arfa to create openings. 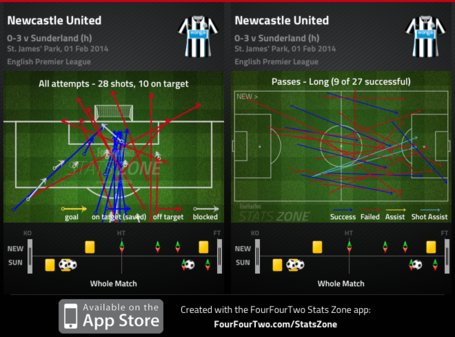 Even in the second half, when they were afforded more of the ball by Sunderland, Pardew's men struggled to create anything meaningful. The home side had 28 shots, but Vito Mannone was scarcely troubled. Indeed, nine shots were made by Shola Ameobi, often from ridiculous range, as the Newcastle frontman seemingly heeded too much of the hype surrounding his name in this fixture. 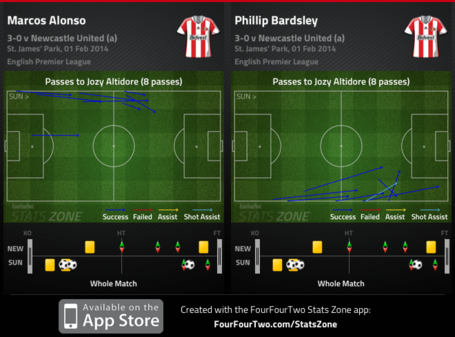 In comparison, Gus Poyet's men used width extensively. As stated, they sought to play on the break more frequently than has been seen throughout Poyet's reign - though, a similar ploy was used at Fulham in January, to equally good effect. The visitors looked to shift the ball to the wings and drive forward from there.

Key in this game plan was Jozy Altidore. The American centre-forward was nothing short of outstanding on Saturday, linking up play brilliantly and posing a constant threat. It helped hugely that Sunderland sought to get runners ahead of him, particularly in the form of Colback (more on which later), but the much maligned centre-forward showed an all-round game that has often been lacking this season.

Two of Sunderland's three most frequent pass combinations were when the two full-backs, Marcos Alonso Phil Bardsley, played the ball in to Altidore. This showed two things. First, Poyet's two wide defenders posed an attacking threat, moving forward into the opposing half. Secondly, Altidore's movement was much more improved than recently, with him dragging the likes of Mike Williamson and Steven Taylor out wide. In turn, this opened up gaps for Sunderland to burst through the middle, as shown most effectively by Colback's run and shot for the second goal after just 23 minutes. 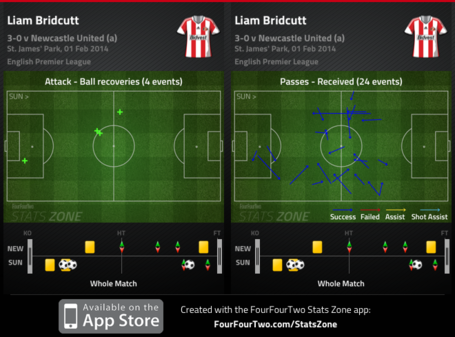 Throughout his four month reign as Sunderland manager, Gus Poyet has ensured that his side have had solid defensive foundations beneath any attempts to attack, and nowhere was that more evident that on Tyneside this weekend.

Key to this, as many expected him to be, was Liam Bridcutt. The man from Brighton and Hove Albion looked slightly unsteady during his first ten minutes of Premier League football, but from there he grew into the game and looked more and more assured with each passing moment.

Bridcutt is very much a no frills player, and that is exactly what makes him such a great fit for this Sunderland side. He was not perfect - nine of his 34 passes went awry - but what he did brilliantly at the weekend was marshall his teammates and take the sting out of the game at opportune times. In the first half, he effectively man-marked Ben Arfa for much of it, to the point that the tricky Frenchman was moved out wide after the break. Bridcutt's positioning - which is almost impossible to represent via statistical dashboards - was hugely impressive, and ensured Wes Brown and John O'Shea were rarely troubled behind him. 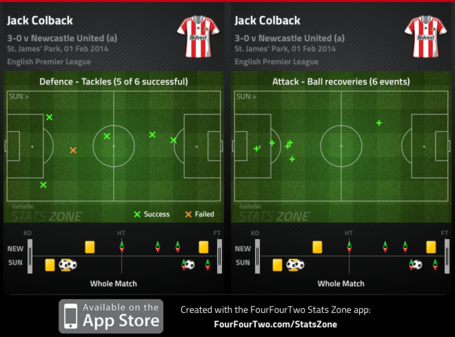 Pivotally, Bridcutt's solid platform gave Jack Colback the freedom to really press high up field. Ki Sung-Yueng was also excellent in terms of retaining possession and moving play forward, but it was Colback who was entrusted with the pressing aspect of play along with supporting Altidore, and he did both of his jobs brilliantly.

While the Englishman was highly effectively on the ball - and was rewarded with a sumptuous goal that well and truly ended the game as a contest - it was his tenacity without it that really made a big difference, and served to rattle the hosts. Colback won tackles high up the field, and five out of six tackles overall, as well as making a number of ball recoveries and contributing three interceptions. His role on Saturday was personified in that third goal: he was strong in the tackle, nicking the ball away from Ben Arfa, before surging forward ahead of Fabio Borini and providing a finish worthy of winning any game. 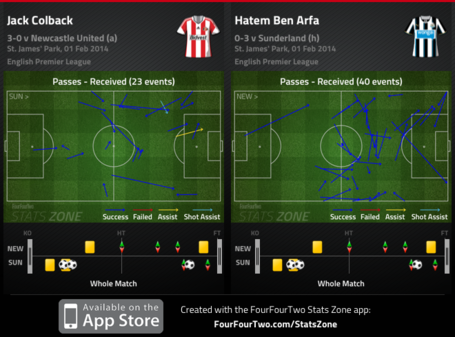 A comparison between Colback and Ben Arfa offers a fairly stark contrast, too. Though the latter received the ball more frequently - indicative of Newcastle's over-reliance on him - he only once did so in the Sunderland penalty box. Colback, meanwhile, had three receptions in the Newcastle area, not to mention that chance he burst through for that resulted in the game's second goal.

Sunderland were superb on Saturday, thanks in no small part to their manager's tactical awareness. Where Pardew was foolish to select just two central midfielders and pin most hopes on the shoulders of Hatem Ben Arfa, Poyet once again adapted his strategy according to his side's opposition.

Sunderland still prioritised keeping possession when it suited, but they also weren't afraid to go more direct if the opportunity to do so arose. Showing confidence in the strength of Altidore, the likes of Brown and O'Shea were happy to loft the ball upfield on occasion.

In addition, Poyet realised that commanding huge swathes of possession in this game was not an absolute. Much more important was that Sunderland retained defensive shape, refusing to give too much space to the likes of Ben Arfa and Moussa Sissoko, both of whom are capable of building up impressive runs with the ball. Newcastle's almost long-ball approach was never likely to work anyway, but the fact that Sunderland pushed them towards this strategy must not be overlooked.