Sunderland's hopes for a pre-Wembley boost were dealt a hammer blow in North London on Saturday, as their visit to Arsenal was over as a contest within 45 minutes. 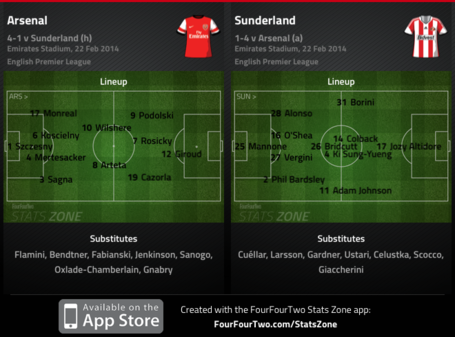 The major decision that lay in Gus Poyet's hands before Saturday's game was whether or not he would risk deploying Lee Cattermole - who was excellently a week previously at home to Southampton - with the Capital One Cup Final just a week away. As it were, the Sunderland manager opted for Liam Bridcutt in the defensive midfield role. Cattermole, Poyet would later explain, was left out entirely, given referee Andre Marriner's apparent dislike for the former Sunderland captain.

Elsewhere, the side was much as expected. With Wes Brown serving the second match of a two-game suspension, Santiago Vergini continued in central defence, while the Newcastle-defeating triumvirate of Bridcutt, Ki Sung-Yeung and Jack Colback was retained in an effort to match the might of the home side's central prowess.

As for that home side, Arsene Wenger welcomed Olivier Giroud back into the starting lineup following an uncomfortable week for the Frenchman. Tomas Rosicky was preferred in the role directly behind Giroud, with Jack Wilshere and Mikel Arteta supplying from behind. 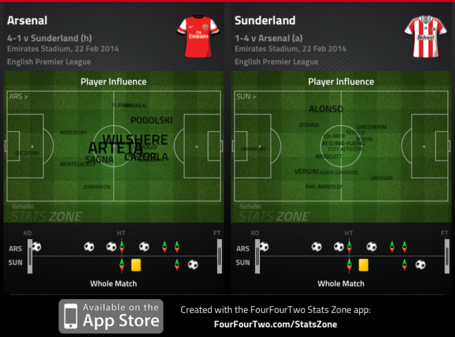 In our preview of this game on Friday afternoon, we predicted that the main match-up would come with the battle of the midfield trios, and so it proved. In truth, it wasn't a difficult prediction to make - Arsenal's style of play lies heavily upon them creating chances from central areas.

As shown above, Arteta and Wilshere dominated this game. The pairing were at the heart of everything good the home side did on Saturday, and Sunderland simply could not cope with them. 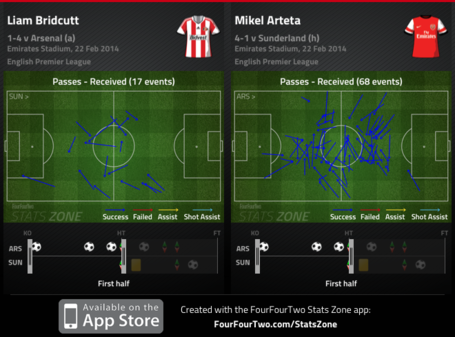 The difference between Bridcutt and Arteta's receptions in the first half alone is astonishing. Bridcutt's role in the Sunderland side is clearly defined - he is expected to be the first out ball from defence, keeping things ticking over and relieving pressure on teammates. Yet, on Saturday, his teammates could scarcely find him with the ball. Arsenal's pressing had much to do with this, as shown in the dreadful error committed by Santiago Vergini for the game's second goal, but all too often Sunderland were too ponderous or chose the wrong option.

By contrast, Arteta personified the home side's slick approach. It was he who would look to from triangles with the likes of Wilshere and Rosicky and, due to Sunderland's shoddy shape throughout the first half, they were more often than not successful. Poyet's men improved after the break (they couldn't have been any worse, in truth), but the three in the centre of midfield found themselves well and truly steamrollered.

With Sunderland pressured into aimless balls forward and sloppy passing, they could not even use the likes of Fabio Borini and Adam Johnson as outlets. The two wingers received the ball just eight times each in that opening 45 minutes - with only one of those sixteen receptions coming in Arsenal's defensive third. So minimal was Johnson's impact that he found himself replaced at the break. 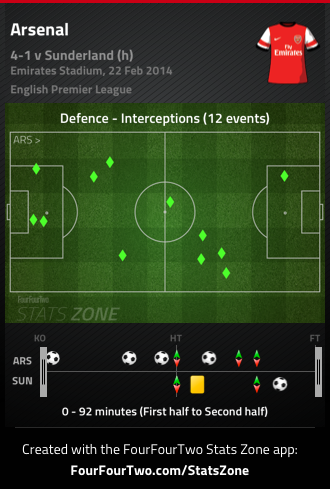 Arsenal's strategy was very forward-thinking for a side that had widely been seen as under pressure in recent weeks. Wenger implored his side to work high up the field, with the full-backs pushing Borini and Johnson back and Rosicky and Wilshere ensuring the likes of Colback and Ki were never able to find too much space. Had Sunderland been more composed it could have been risky - their best move of the first half came when they counter-attacked with pace, Ki finding space down the left. Unfortunately for them and Poyet, they struggled to string two passes together for much of the opening half. Their improved second half showing came once the game had long gone.

Sunderland's complete inability to keep the ball in that first half ensured that Arsenal stopper Wojciech Szczesny managed barely a touch. Jozy Altidore was an anonymous presence, but it is difficult to blame the American for this in this instance. At times his body language was desperately poor to see, but his frustration with the service provided to him was entirely understandable. 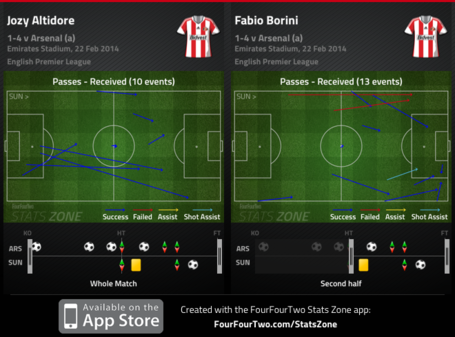 Altidore received the ball just once in the final third of the field, and all too often Sunderland resorted to hoofs upfield to the struggling striker. True, Arsenal pressed well, but it was desperately disappointing to see from a side that has looked so much more composed in recent times.

In the second half, Fabio Borini was shifted to a more central striking role, and the difference is clear to see. Obviously, with Arsenal taking their foot off the pedal, Sunderland were able to move higher up the field. Even allowing for that, though, the comparison between the two suggests how much better Borini's movement is than his American counterpart. Again, it would be churlish to blame Altidore too much - Sunderland's problems came from deeper areas and other individuals - but the improvement of the second half, with Borini up top, will have given Poyet something to think about ahead of Sunday's trip to Wembley. 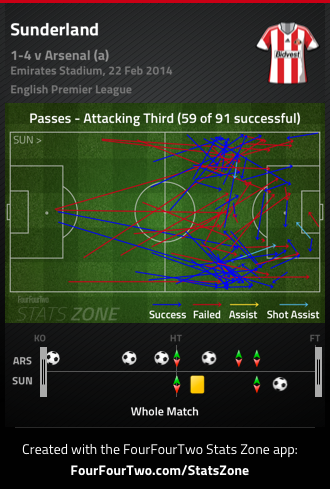 All in all, though, Sunderland just offered nowhere near enough in an attacking sense. Their passing in central advanced areas was almost non-existent, and their forays into the Arsenal penalty box extremely infrequent. Even Emanuele Giaccherini's late consolation, though well taken, was pretty much a shot from nothing.

Sunderland and Poyet will do well to move on from this game quickly. It was a bad day at the office, one that unfortunately came against one of the best sides in England. Arsenal did not have to be outstanding to win this game, but they were very good and highly efficient. Furthermore, their third goal, a beautiful, one-touch flowing move, will take some beating this season.

One major point that needs to be addressed for Sunderland concerns the game's second goal. Detractors have since pointed out that this incident was the third time in two months whereby slack passing across the back had gotten Sunderland into trouble (Aston Villa and Hull City being the other two examples). Yet, this is no reason to ditch a system that has seen Sunderland improve immeasurably since late September. The truth is that it is the players, not the system, that are inherently limited. Mistakes will happen regardless of how this side plays; Poyet should not (and will not) move away from a strategy that has, by and large, worked very well on Wearside thus far.