All good things must come to an end, and Sunderland's revival came to a juddering halt on Saturday, where they went down 0-2 to former manager Steve Bruce's Hull City side. 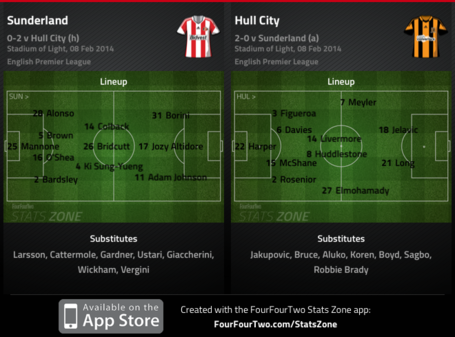 To the surprise of no one, Gus Poyet named an unchanged team from the side that destroyed Newcastle United at St James Park the previous weekend. Ignacio Scocco was deemed not fit enough for a substitute's role, and Lee Cattermole returned to the squad following his recent injury lay-off.

Of course, Poyet's plans were turned on their head as soon as the fourth minute. Debates about Wes Brown's decision-making aside, the reduction in numbers severely hamstrung Sunderland, and also prompted a tactical reshuffle from the Uruguayan manager. Fabio Borini was replaced by Santiago Vergini, with the home side reverting to a narrow 4-3-1-1 formation whereby Adam Johnson was moved into the space behind Jozy Altidore. In truth, Poyet's decisions to do this and, particularly, to remove Borini from proceedings did little to aid his side, as will be discussed later.

As for Hull and Steve Bruce, the former Sunderland manager stuck with the 4-4-2 formation that was long a hallmark of his Wearside tenure. Nikica Jelavic and Shane Long, both new signings, were selected as the strike pairing, while Tom Huddlestone occupied the deeper central midfield role, with Jake Livermore expected to offer greater energy ahead of him. Primarily, Bruce sent out a side that looked to utilise with; a point that made Poyet's decision to go narrow after the sending off all the more detrimental to Sunderland's hopes of salvaging something from the game.

Sunderland's initial reaction to the Wes Brown dismissal was for Liam Bridcutt to drop into central defence alongside John O'Shea. While this was clearly only intended as a short-term fix, it would have been interesting to see what would have happened had Poyet persisted with this strategy; Bridcutt slotted in rather seamlessly, albeit for a very brief time, and it still left Sunderland with two central midfielders and two wide players.

But, instead, Borini departed, with Vergini moving into central defence and Bridcutt once more sitting in front. After last week's performance it was always going to be harsh on whomever was substituted, but the removal of Borini wasn't the most logical. It is natural to remove a winger in the hope of ensuring solidity in the centre, and given Adam Johnson's recent form he was never likely to be taken off, but Borini offers an energy that would have been put to good use in a game where Sunderland were now likely to spend lots of time on the back foot. Arguably, it would have been better to remove either Colback or Bridcutt; Sunderland would retain options on the wings, and would not find themselves outnumbered in central midfield. 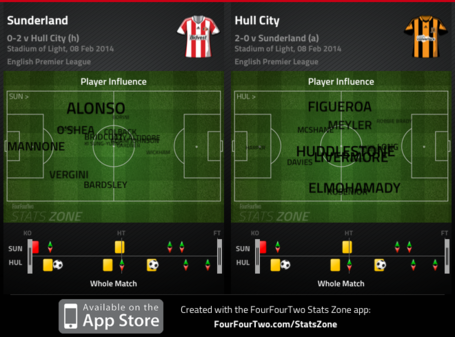 Instead, Poyet persisted with three central midfielders - something which suited the visitors perfectly. As shown, Sunderland were desperately narrow in midfield and attack; conversely, Hull sought to use width continuously, seizing advantage of the new-found vulnerability of Sunderland's full-backs. 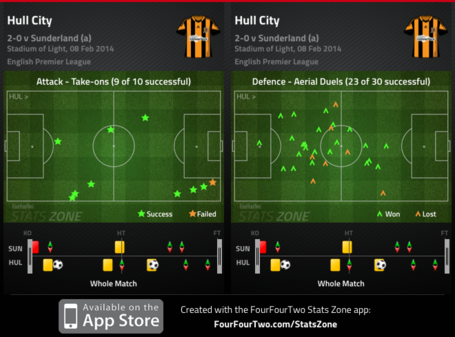 That is not to say that all of Sunderland's problems were strategic errors. Too many times, players lost individual battles. Down Hull's right side, Marcos Alonso struggled against Ahmed Elmohamady - the latter succeeded in all three of his attempted take-ons - although he wasn't helped by the visitors' ability to double up.

In addition, Sunderland's narrow nature meant they often went long towards Jozy Altidore. Hull were consistently good in the air, and Altidore struggled to have any real effect on the game. The same went for Adam Johnson; with Sunderland on the back foot and unable to find outlets on the wings, their two most advanced players struggled to get anywhere near the opposing penalty area. 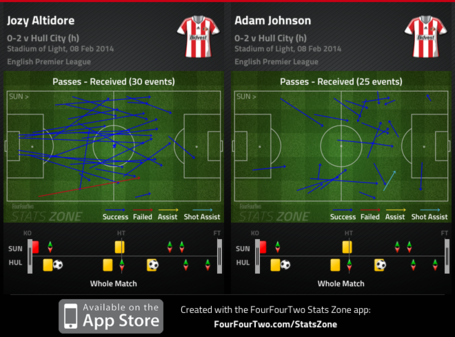 Even considering the undoubted effect of the early red card, Sunderland were disappointing. The likes of Ki and Colback offered little in the way of driving forward through midfield, and throughout the afternoon they struggled to allay pressure. That said, Hull's goals were each of a fairly fortuitous nature; this was a poor game, lacking any genuine quality. 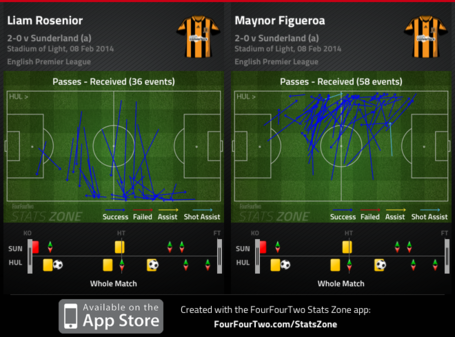 The visiting full-backs had a large bearing on the game's outcome. Leroy Rosenior and Maynor Figueroa offered a constant option in the opposing half for the Tigers, and in doing so they ensured Phil Bardsley and Marcos Alonso - shorn of a partner in front of them - were unable to move forward as Poyet would have liked them to. This clearly showed how Sunderland would have been better keeping Borini on the left wing and Johnson on the right. 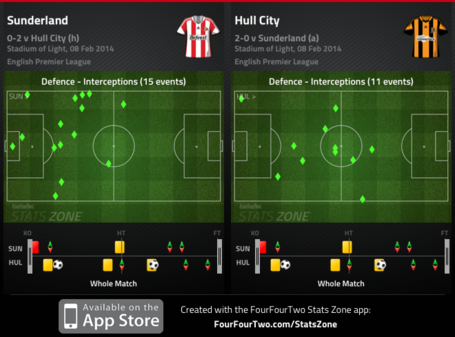 A look at the position of the game's interceptions also shows just how hemmed in Sunderland were. Whereas Hull were able to be proactive, seeking to win the ball high up the field and kill the game off, the Black Cats were only able to cut out attacks in and around their penalty area.

Hull had the upper hand in the possession stakes - 56% to 44% - but they didn't continuously aim to heap the pressure on Sunderland. Instead they remained patient, only really seeking to drive forward on the counter. Sunderland attempted to continue their own possession-based style, but found moves breaking down far too far away from Steve Harper's goal.

Gus Poyet declared his lack of desire to analyse this game too much, and it is easy to see why. Brown's dismissal hamstrung his side massively. Hull, while not excellent by any stretch of the imagination, won this game in a professional manner, embracing width effectively and making sure not to needlessly seek out a thrashing.

Even so, mistakes were made by the Wearsiders. Too many players had off days, while Poyet got his substitution and tactical reshuffle wrong. It has helped to serve as a reminder that, while the Sunderland manager has been nothing short of outstanding since his arrival, he is still learning and is not infallible.

The last time Poyet could be said to have gotten his strategy wrong was in the home loss to Spurs in December. He learned from that experience hugely, and one hopes the same occurs following Saturday's defeat.