Sunderland recorded their first home league victory of 2014 - and the first since November 10th - against Stoke City on a Wednesday evening, in what was an unsurprisingly gritty contest between two relegation strugglers. 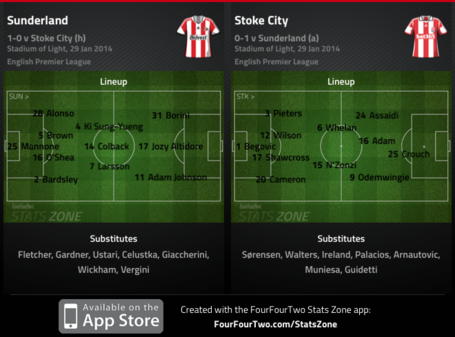 Gus Poyet made two changes from the side that started in last week's heroic penalty shoot-out victory at Old Trafford. Sebastian Larsson replaced Lee Cattermole in midfield; Charlie Oatway would later announce the latter had missed out through injury, but speculation remains rife over whether or not the former captain is set to leave the Stadium of Light today. The other personnel change was up front, where Jozy Altidore was chosen ahead of Steven Fletcher.

These changes also meant a slight tactical reshuffle was needed by Sunderland's manager. Ki Sung-Yueng assumed the role he had taken on board at the start of the season, operating as the first midfield receiver of the ball from centre-backs Wes Brown and John O'Shea. 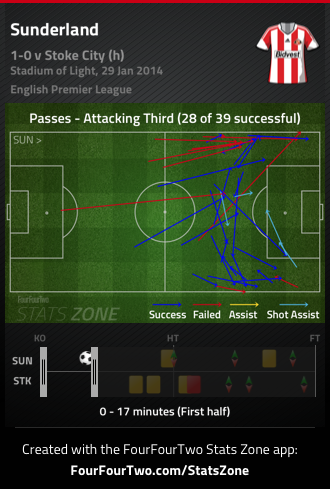 In a game where the first goal was always going to be crucial, it was refreshing to see Sunderland get themselves straight out of the blocks. There were much the better side in the opening twenty minutes of this game, and Adam Johnson's goal on the seventeenth minute came following the home side's third chance of the evening already.

Sunderland kept the ball well in the opening stages and really shifted Stoke City around. Possession was kept, as is common now, but it was done so at a higher tempo than has been evident in recent starts to games - such as the visits of Aston Villa and Southampton, and the trip to Fulham.

Openings were being effectively created, and the visitors took a while to adapt. The problem was that, after this impressive side, Sunderland lost their way somewhat, and the last hour of the game saw Mark Hughes' men as the better side - even when they were reduced to ten men after Steven N'Zonzi's dismissal early in the second half. 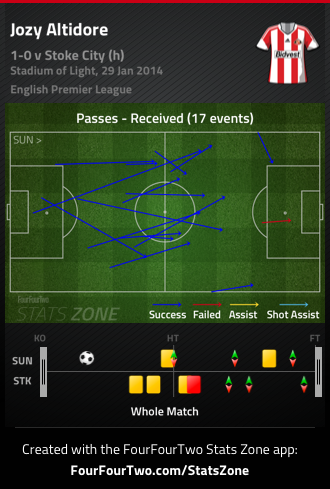 One of the big problems for Sunderland was one that was nothing new: their striker was left far too isolated. Jozy Altidore and Steven Fletcher have shared the lone striking role between themselves this season, and we mean 'lone' in the most literal sense of the word possible, and there are plenty of arguments surrounding their individual failures there.

For Altidore, many suggest he simply isn't good enough. In this game, however, that was not the issue. Time and again, Altidore held his own against the typical might of the Stoke central defensive pairing of Shawcross and Wilson, only to be offered no support from his teammates. Infrequently in the first half, Fabio Borini latched onto Altidore's well-won headers, but these instances were few and far between.

As shown, Altidore consistently received the ball far too far away from Asmir Begovic's goal. Too often, the main ball to him came as a result of a goal kick or an instance where Vito Mannone was forced into a long ball forward. With Ki dropping deeper into Cattermole's role, there was no real movement at the head of the central midfield trio; neither Jack Colback nor Seb Larsson offered intelligent movement that aided Sunderland's American striker.

It is true that Altidore doesn't regularly make effective runs. His decision in the first half to move out towards Marcos Alonso on the left, when all the world could see the latter was going to send the ball low into the centre of the box, was a perfect example of Altidore's baffling decision-making at times. But there were plenty of instances on Wednesday when Altidore did make a good run, dragging centre-backs out wide and creating space, only for his teammates to refrain from passing to him. Do they lack faith in him? Perhaps. But the unwillingness to present him with the ball did Sunderland no favours in the first half on Wednesday. Furthermore, it allowed Stoke to press higher in the second half, as the visitors latched onto the fact that Sunderland were unlikely to try to play Altidore in behind. 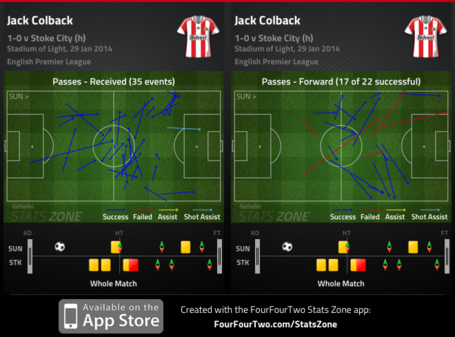 Complaints about Jack Colback's unambitious passing are largely overblown, but on Wednesday he was symptomatic of the lack of creativity that coursed through Gus Poyet's side.

Alongside Larsson, Colback was expected to be combative, but Poyet will also have hoped these two men could have offered something in an attacking sense. They were found wanting in this department. Too often, both of them found themselves in a position to play a potentially incisive forward ball, only to wait too long, or turn backwards. There is nothing inherently wrong with this - indeed, recycling possession should be encouraged in many cases - but it was to Sunderland's detriment in a game where they were clearly nervous.

Had Colback or Larsson showed a bit more conviction, Sunderland's margin of victory may have been greater. Indeed, the one time Colback did surge forward, late on against ten men, he forced Begovic into a strong save. Unfortunately this was a departure from the norm and, with a very nervy crowd loading their jitters onto the players, Sunderland's central midfield was very poor in the second half. It should be added that Ki Sung-Yeung was no better; it is clear that the South Korean is suited to playing further upfield.

This was a fairly dour game from a Sunderland point of view. They started well, but a combination of sloppiness and evident nerves almost conspired to rid them of a much-needed win - Vito Mannone was again called into action on plenty of occasions.

Stoke acquitted themselves well, especially after going down to ten men. That said, it is hard not to feel that, had Sunderland been more ambitious, they could have killed the game off properly, much like Stoke did in similar circumstances back in November.