Share All sharing options for: Seb Named Most Accurate Free-Kick Taker In League

Are you one of those people who love stats or loath them? If you are the former, then here is a bit of a treat. If the latter, allow us to apologise here and now.

Personally, I'm a bit on the fence. I think stats can offer a useful perspective but too much emphasis is usually placed upon them. Still, if you want stats, then Opta is the place to go, and they have been compiling some data to try and ascertain the most accurate free-kick taker in the Premier League.

Perhaps surprisingly, particularly given that he hasn't scored one for absolutely ages, it is Seb Larsson who has claimed the top spot.

If you're interested, it's probably just best if you read the actual article HERE, as they go into much more detail than we can be bothered to about the data and its supposed relevance. Here are the actual numbers and standings though. 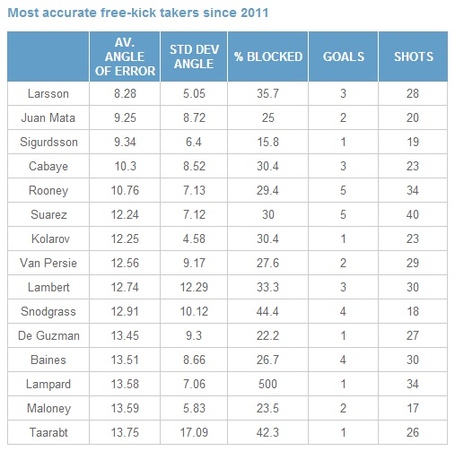 So, take from it what you will. I'd rather have the Seb back who scores from free kicks than get is most accurate but doesn't. It would help if he actually took a few more, though. Is it just me or does he not take as many as he should these days?

Anyway, there we go. Take from it what you will.