Sunderland extended their unbeaten run in all competitions to four games, coming from two goals down to salvage an important point against an excellent Southampton side. 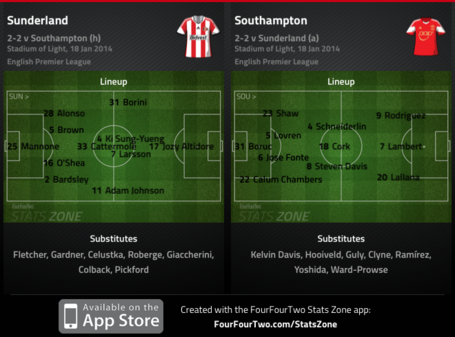 Gus Poyet made two changes from the side that started in last weekend's 4-1 victory over Fulham at Craven Cottage. In midfield, Seb Larsson, who impressed from the bench in south-west London, replaced Jack Colback. The other change came up front, where Jozy Altidore was chosen to lead the line ahead of Steven Fletcher, in what is becoming something of a rotation policy by the manager. 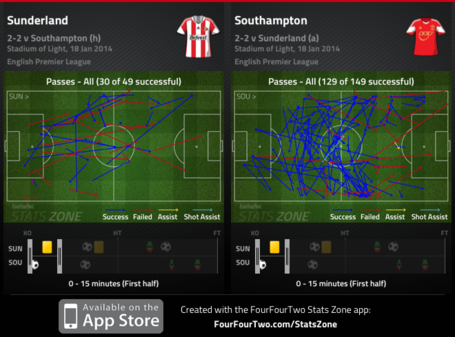 It was startling quite how much Southampton dominated the first half hour of this game and, in particular, the opening fifteen minutes. Mauricio Pochettino had clearly told his side to go hell for leather in the first half, in the hope of striking early and ending the game before Sunderland had a chance to find their feet.

It almost worked, too. Jay Rodriguez struck home after just four minutes, Rickie Lambert should have scored after a beautifully flowing move, Rodriguez should have found the net again following a Wes Brown error, before Dejan Lovren doubled the visitors' tally just after the half hour. Had Fabio Borini not hit back instantly, it is likely Sunderland would not have gotten anything from this game. 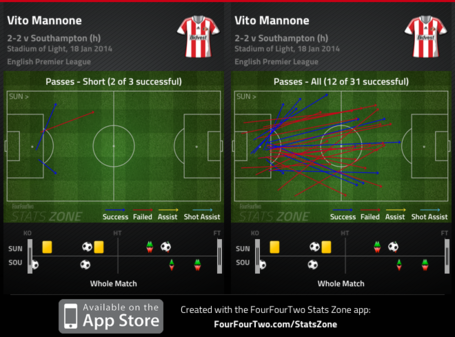 Primary in Pochettino's game plan was the decision to completely stop Sunderland from playing out from the back. Poyet's men have seen other sides try to do this, but not to the extent of The Saints in the first half on Saturday. With Rickie Lambert directing proceedings up top, Rodriguez and Adam Lallana were relentless in their pressing, consistently stopping Vito Mannone from moving the ball on the floor to either his defenders or Lee Cattermole.

As a result, the Italian was forced into long balls upfield. Here, even if Sunderland were able to win the aerial duel, Southampton were relentless in their recovery of the second ball. 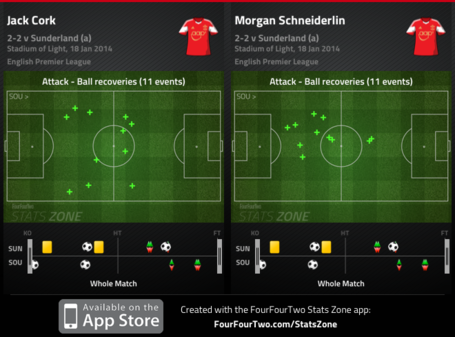 As shown, Jack Cork and Morgan Schneiderlin were excellent at recovering the ball in midfield. Particularly in the opening half, this stopped Sunderland building any real semblance of pressure; even Borini's goal was completely out of the blue in a half that Sunderland were dominated in.

One man who deserves real praise is Steven Davis. The former Rangers man's role in the side often goes unnoticed amid the number of other stars in Southampton's side, but his energy and stamina are crucial in his side's fortunes. Davis was excellent on Saturday, and his pursuing of Sunderland players when they had the ball was a key factor in Poyet's men rushing decisions on a frequent basis. His tireless work enabled the likes of Lallana and Rodriguez to effectively "float" between Sunderland's lines of midfield and defence. In addition, Davis was was key in nullifying Ki Sung-Yueng; the South Korean received the ball just 21 times and attempted only 26 passes across 90 minutes, an extraordinarily low total given how important he has been to Sunderland in recent weeks.

A Game of Two Halves

One real positive for Sunderland at the break was, although they had been outplayed comprehensively, there was no way the visitors could keep up a similar intensity in the second half. Pochettino's plan had been to see the game out of sight by the time the beginning of the second-half rolled around, but a combination of poor finishing and his defence switching off ensured the hosts were still firmly in the game. 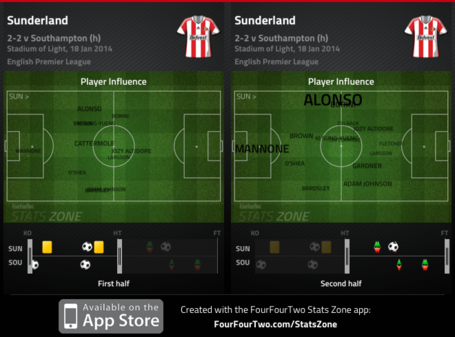 In the first half, Gus Poyet's men were extremely narrow, and scarcely visited the Southampton half. Hemmed in by the visiting side and unable to keep the ball effectively, Sunderland lacked and found too many of their side in deep positions.

With Southampton inevitably tiring, gaps opened up and the hosts were able to move the ball more freely, and also seek to use width to stretch their opponents. Adam Johnson grew into the game much more, and was rewarded with a goal, while Marcos Alonso was constantly utilised on the left - unfortunately, the loanee had a rather poor game. 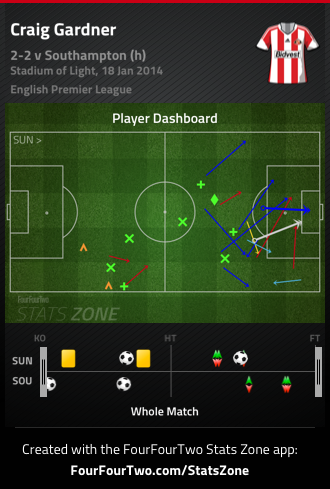 In what is now firmly a recurring theme of the Poyet reign, Sunderland's substitutes had a large impact on the game. Poyet brought on both Jack Colback and Craig Gardner just after the hour, replacing Lee Cattermole - who had looked uncomfortable - and Seb Larsson - who had scarcely touched the ball.

While Colback's energy helped to shore up things defensively, such as in stopping people getting between the lines, it was Gardner's attacking motives that really helped turn the game in Sunderland's favour. Gardner is much-maligned and for good reason, but he has often looked good when coming on as a substitute against sides that are visibly tired.

Gardner won 100% of his four tackles and offered a real driving presence; he gave both Altidore and then Fletcher support that had been sorely lacking in the game's opening hour. His determined showing not only helped his side move higher up the pitch and put Pochettino's men under the cosh, but it also revitalised the crowd - something which in itself visibly helps Poyet's men. Gardner remains far from the answer to Sunderland's problems, but his cameo on Saturday was excellent.

Some have suggested that Gus Poyet got his tactics and team selection wrong in the opening half, but this is a difficult view to find reason with. For a start, Seb Larsson and Jozy Altidore both played well when they came on at Fulham; never mind the fact that Poyet will have had one eye on the huge semi-final when deciding whom to rest.

Sunderland were dangerously sloppy on the ball in that first half an hour, but Southampton and Pochettino deserve huge credit too. The movement of Rodrigeuz and Lallana, linking up with Lambert, was astoundingly good at times, and the visitors deserved to be further ahead than they were. Pochettino will have been furious that his side switched off so soon after doubling their advantage.

The Black Cats deserve credit for their comeback. Adam Johnson, yet again, was excellent, even in the dour first-half showing by his teammates. Sunderland could well have won it late on, but Poyet will be happy with his side's resolve.

Southampton showed on Saturday that Sunderland's strategy of building from the back can be disrupted, but it takes a gargantuan amount of effort to completely nullify it. That said, had they taken their chances, they would have been out of sight before half-time.

Gus Poyet has effectively implanted Plan A into his squad's mind. Now he must look at enacting a Plan B for when sides, like Southampton, manage to disrupt the former effectively.