Holy hell, we won a game, again! Come on in as we analyse the superb 4-1 defeat of Fulham at Craven Cottage on Saturday.

Share All sharing options for: Talking Tactics: Fulham (A) 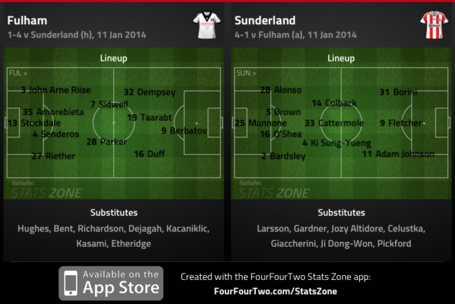 Just as it had on Tuesday evening for the visit of Manchester United, Gus Poyet's Sunderland side looked well-balanced at Fulham. The back five remained unchanged, with the only change in the midfield three seeing Jack Colback replace Seb Larsson.

Up front, Steven Fletcher was again flanked by Fabio Borini to his left, but to his right Poyet selected Adam Johnson as the man to feed him following his impressive showing from the bench in midweek - Emanuele Giaccherini made way for the Englishman.

Clearly, given his three goals and his assist for the other, Adam Johnson was the star of the show in south west London. Johnson was at the heart of everything Sunderland did well going forward on Saturday, and truly led from the front in what was a crucial game for his side. 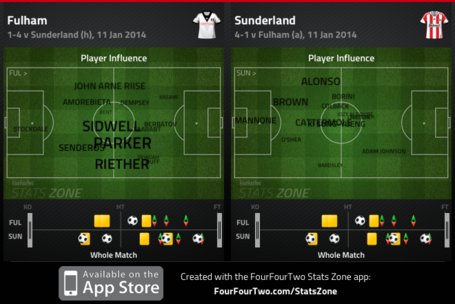 Part of the reason for his impact, as shown above, was how high upfield he was able to position himself. Here again, there was an evident balance in the side selected by Poyet. Fabio Borini is no shirker of defensive duties - he contributed two interceptions and three clearances in the game - and his selection means that whomever is on the opposite wing has a bit more freedom to push forward and support Steven Fletcher.

In addition, with Phil Bardsley told to be slightly more restrained in his bursts forward, Johnson could seek to attack without fear of leaving his teammates exposed at the back. That he was receiving the ball 30 yards from goal, as opposed to on the halfway line, made a huge difference. 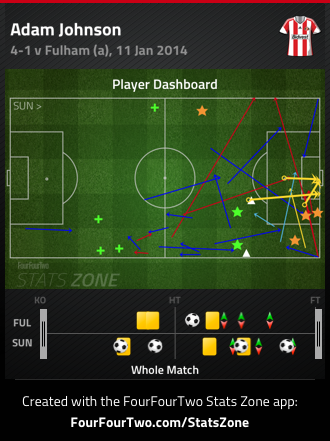 Then, when he had the ball, Johnson utilised it excellently. Time and again he would drive at John Arne Riise, drawing the full-back into fouls and missteps. Indeed, Johnson effectively assisted himself for the games opening goal; the free-kick he despatched was won when he was fouled by Steven Sidwell.

The Sunderland man was very forward thinking throughout. He scored three, assisted one, and created two more chances, in an all-round excellent display. This game was not won solely because of his performance, but if Adam Johnson continues to operate at a similar level for the rest of the season, Sunderland should be nowhere near the relegation zone come the end of May. 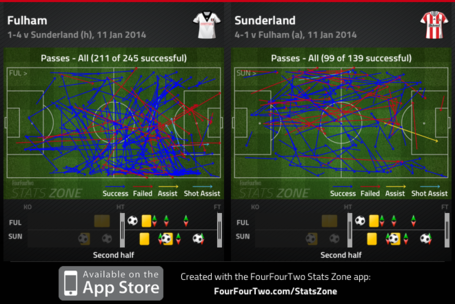 An intriguing aspect of Saturday's win was how it offered proof that Gus Poyet is not unwavering in his approach to games. At the beginning of his reign on Wearside we discussed how the new manager had opted for pragmatism first, before slowly easing the squad into his heavy emphasis on possession and slow, measured build-up play.

It had appeared that this would become the side's set-in-stone strategy, but Saturday has offered yet more credence to the view that Poyet is willing to sacrifice his philosophy (to an extent) if needs be. The preference for short passes remained, but at Craven Cottage his Sunderland side were much more willing to cede possession to their hosts and seek to counter-attack - particularly in the second half.

It appears that Poyet shaped his strategy according to the opposition his side faced. Steven Sidwell and Scott Parker, while tidy footballers who are good at retaining possession, are not likely to bound forward and offer a great threat offensively. Sidwell scored, of course, but this was a result of an isolated set-piece incident, where Marcos Alonson should have tracked his man far better.

The perceived lack of attacking threat from Fulham's central two meant Poyet was happy for the home side to keep the ball, as long as they were not able to make the transition into more dangerous areas. There were some hairy moments at the beginning of each half, but these were usually as a result of mistakes on Sunderland's behalf; neither Clint Dempsey nor Adel Taarabt had any great influence on the game, with Lee Cattermole in particular offering an excellent defensive showing to combat them. 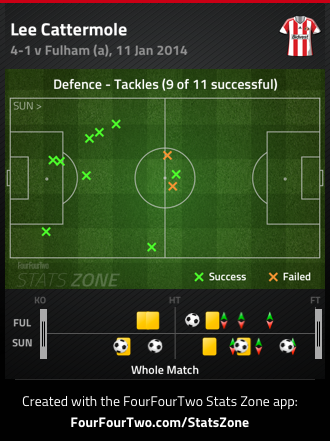 Sunderland ended the game with just 41% possession, but their counter-attacking in the second half was worthy of winning any match. Each of their two second half goals was a result of a quick breakaway, but the third goal - which effectively sealed the points - was the pick of the bunch. 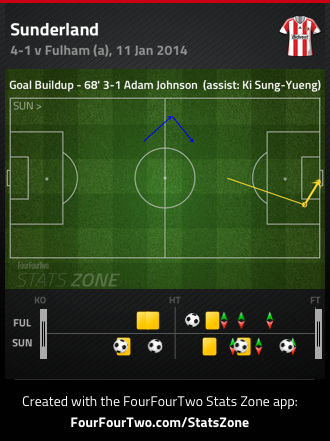 With Fulham attacking, Lee Cattermole first blocked off the surge forward into Sunderland's area, then managed to find a teammate with a pass whilst still rooted to the ground. From here, Ki Sung-Yueng moved forward with purpose, exchanging passes with Jozy Altidore before delivering a perfect weighted assist to the onrushing Adam Johnson. It was a superb counter-attacking goal, reminiscent of the early Martin O'Neill days, and one which showed perhaps how Poyet really wants his side to utilise possession-based play - ie. at a far higher tempo than they have previously seemed capable of.

A Word On Set-Pieces

It was disappointing that Sunderland conceded such a soft goal from a corner on Saturday afternoon, but far more promising was their own acumen from attacking set-pieces.

Gus Poyet's arrival has introduced a number of different routines to Sunderland's free-kicks and corners, and the win at Fulham was no different. The Black Cats had already gone close with a routine when John O'Shea nodded a free-kick back across goal to Steven Fletcher, who headed just over, before Ki Sung-Yueng's deflected effort sealed a well-worked set play with a deserved goal.

It all points to greater organisation amongst the side, better communication and - perhaps most crucially - a vindication of the manager's methods. For all his barminess, Paolo Di Canio's eccentricities may have been accepted had he achieved the results to match his demands. His failure to do so did little to aid any qualms he would have had with his dismissal.

Poyet, of course, is a completely different breed of manager. But it remains that, in implementing a style of football previously alien to Wearside, the Uruguayan risked being on a hiding to nothing. Thankfully it appears the squad is fully on board, and the variety offered by his set-piece routines is not only fun to watch, but also a much needed addition to Sunderland's armoury.

Sunderland were actually rather poor for the early stages of each half, but theirs was a deserved victory this time around. Fulham were largely impotent, as the Black Cats defended well once more save for some individual errors, and they also offered vibrancy in attack and creativity that had previously been lacking.

Johnson was evidently the star of the show, but the likes of Ki, Borini, Cattermole and O'Shea, to name just four, all put in sterling performances. Poyet's pragmatism was a delight to see, and it will be intriguing to see how he varies his approach in upcoming games.