This year Roker Report decided to become fully immersed within the world of transfer watching. For us this was a summer of mud-slinging, name-calling, bitching, and bullsh*t. This was the transfer window, 2013-style.

Share All sharing options for: The Transfer Window, Chinese Whispers, And 'Lazy Journalism'

This summer, Roker Report made a concerted and specific effort to try to keep Sunderland fans up-to-date and relevant transfer information.

We were quite open and honest about where the vast majority of it came from. We scoured the foreign news channels across the globe and were generally successful in assessing, checking, and reporting the latest news. We didn't get everything right, of course, but I'd say our record was up there with anyone's despite being fully subscribed and willing slaves to Google Translate. Needs must, after all.

That isn't to say that we don't have various ways and means of checking the accuracy of reports we find, but in 99% of cases we took ego out of the equation and included a hyperlink to the original, usually foreign, story.

God help us if we saw something in a British paper and mentioned it without crawling firmly up the backsides of the imperious 'proper journalist' who found the story using his vast array of hidden contacts and razor-sharp street smarts, though. Accusations of theft and the like tended to follow even if we cited them as a source.

"Those pesky, amateurish bloggers", they snarled, including one journalist from the tabloid we will get to later. "Stealing the exclusives of us poor put-upon professionals" etc.

Anyway, seems not all of them are that street smart anyway. The following is an example of how one big Sunderland 'story' came to a major British tabloid newspaper. The story in question was Paolo Di Canio apparently looking to hijack Crystal Palace's move for Quincy Owusu-Abeyie, who spent some time on trial in South London this summer from Panathinaikos.

It started out all simply enough. The Greek media, specifically Nova Sport FM reported that Palace had decided against making an offer to the former Arsenal man. Here is the article run through Google Translate. 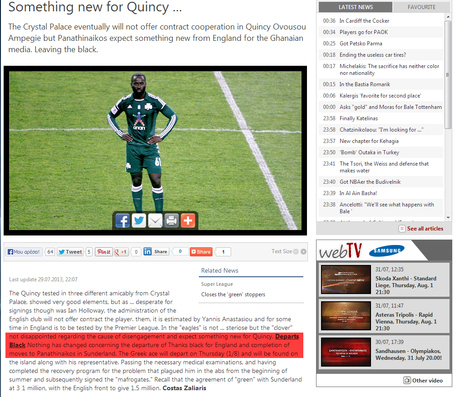 Notice the highlighted part where it says that Sunderland are expected to meet the winger's representatives and complete a move. Problem is, the winger it refers to wasn't Quincy at all - it was Charis Mavrias. It was an extra story tagged on the end beneath a bolded subheading.

The 'Departs Black' part isn't a piece of casual Greek racism. Google translates 'Mavrias' into 'Black'. We knew all about this particular pitfall as we'd been following the story for a while, but to a quick look all there seems to be is a story about Quincy leaving for England, Sunderland meeting up with a player, and no mention at all of Mavrias.

In fairness it is an easy trap to fall into, and someone did. Below is an article from Goal.nl (again run through a translator) the next day. Note how they even cite the original article that we captured above. 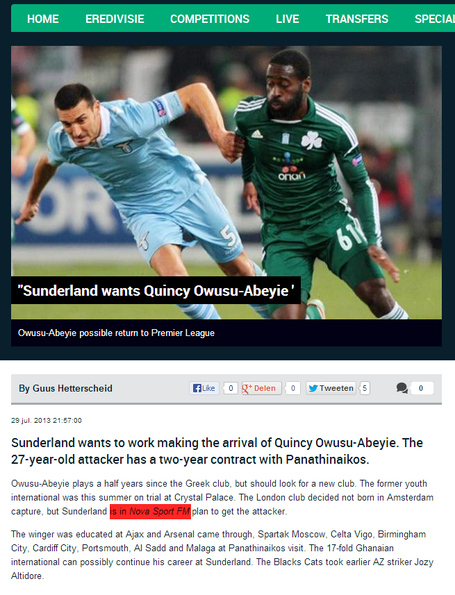 So we have a Greek article, run through Google to innocently omit highly-relevant information and create a false message, and picked up by the Dutch arm of a major digital media company who publish the mistranslation.

Of course, the Internet being the internet, it wasn't long before the Tweets started...

Quite the game of Chinese whispers we have going on here! Now his agent is talking about Sunderland, apparently!

But surely the famed Daily Mirror wouldn't fall for the misinformation loop? Surely they have contacts, sources, well-trained honourable and vigilant sports journalists who can clear the whole thing up with a simple phone call to a well-placed 'source close to the club' and stuff? 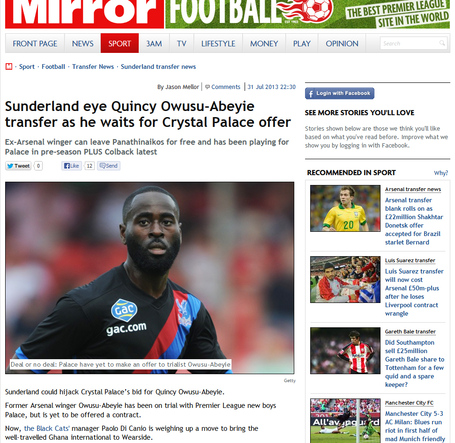 So there we have it. A Google mistranslation to British national football press within about three or four days.

The objective here isn't to have a pop at anyone. It was an easy enough error to make. It should be stressed that there are still plenty of fine football journalists out there doing a fine job sourcing genuine original information. We shouldn't tar everyone with the same brush.

Neither is it to try and talk ourselves up. We are just part of the chain really. We have been the first to pick reports up from abroad over the last few months, repeat them, and have it taken on from Roker Report to other sites. It's reasonable enough.

But this highlights how desperate the tabloids are to milk the transfer window for all it is worth. In the technological age, this appears to be the game now. It is information on a mass-production scale. Churn it out as fast as you can, bank the clicks and the retweets, and move onto the next batch of rumours. No time for checking, no time for regrets, no time for even thinking, it would seem.

Briefly revisit the stories that do turn out to be true, making sure everyone knows you got something right, but never mention the many many more that didn't happen so no one remembers you got loads more stuff wrong. The grand illusion.

The public's thirst for stories and soap opera in the transfer window now outweighs the professional integrity for much of the press and digital media, with a giant game of Chinese Whispers and a whole lot of 'lazy journalism - the actual kind as opposed to when decent writers say something we don't like - the result.

Roker Report owes its very existence to the technological and digital age, so we can't complain about there almost being too much information out there. It does makes for a bit of a minefield, though.

Our advice? Have a good long nap before January, brace yourselves for bullsh*t, and wait for the photo of the player holding the scarf. We'll continue to bring you the stories we find that we think would be of interest and worth watching, but I look at us more as service that tries to filter out the rubbish than anything else. Personally, I think we did it rather well but we'll give it an even better go next time.

This year was the first year that we have really immersed ourselves in transfer window from a coverage point of view. It has been fun, very hectic, and above all an education. Not about how little we know (we already knew that we didn't know much) but mainly about how little others who claim otherwise actually do.