Our usual tactical recap looks back at the 3-1 defeat to Crystal Palace, and just what to do about the central midfield situation?

Share All sharing options for: Talking Tactics: Crystal Palace (A) 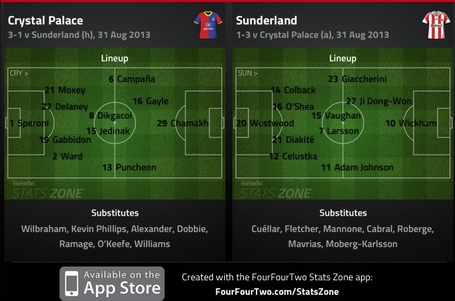 Injuries to Jozy Altidore and Craig Gardner forced Paolo Di Canio into a reshuffle, whilst Stephane Sessegnon's off-field indiscretions meant that Sunderland made three changes to the starting line-up. Connor Wickham's two-goal outing in the Capital One Cup was rewarded with the centre-forward role, whilst Ji Dong-Won was deployed slightly deeper and David Vaughan took Gardner's place in midfield.

Both David Vaughan and Seb Larsson have come in for criticism for their performances in this game. Perhaps the only positive of Transfer Deadline Day (the novelty is so far gone it is beginning to rust) is that this piece has come later in the week, bereft of any immediate emotional reaction to Saturday's unfolding. Whilst both were ineffective as a pair, they were selected by Di Canio - the former having not even been considered a central midfield option all pre-season. So there was little surprise to see Sunderland's midfield overran and easily dissected. 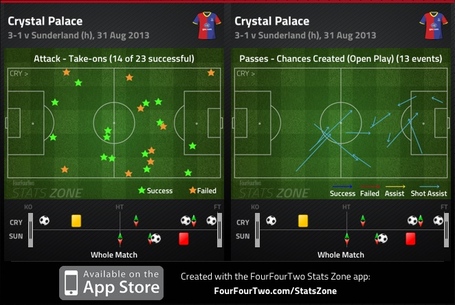 The graph above depicts Crystal Palace's main attacking productivity; over half of their 13 chances were formed from around the centre circle, four from inside their own half. As you can see, these were not searching passes over the top of Sunderland's back line, or incisive through balls, but merely short passes that simply shifted the point of attack which Larsson and Vaughan could not deal with. To emphasise the advantage that the home side had in the middle of the park, Jason Puncheon frequently came off his left-sided starting point to receive possession and also create an one-man advantage in central areas - to which they utilised by simply moving the ball. 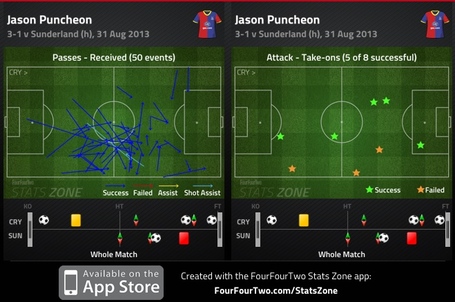 One of the most surprising aspects of this season so far has been the utilisation of full-backs. Under Di Canio, Sunderland have sought to get them to contribute in both phases of play - rather than simply being wide defenders. As such, it has taken time for the rest of the Sunderland side to catch on, with Jack Colback being overlooked for a pass on previous occasions having surged forward to support. This again showed itself against Palace, as the decision not to release an overlapping Ondrej Celustka in the first half had Di Canio seething on the touchline.

Fortunately, it looks like the penny may be dropping, as it was Colback's overlapping run - and then cross - which found Steven Fletcher for Sunderland's equaliser. In fact, FourFourTwo StatsZone's depiction of the goal resembles a lot of what Di Canio has began to implement; playing from the back, full-backs supplementing attacks and crosses into the box. Not bad for a first goal in open play this season. 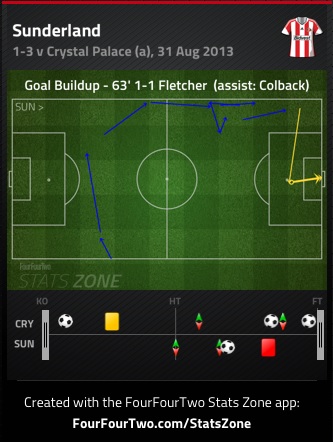 The decision to re-introduce a barely fit Fletcher almost paid off. Not only did he take his goal expertly, in his 45 minute outing he displayed his ability to bring others into play - he found five different team-mates with passes - in addition to posing Palace a genuine threat. Much to the home side's credit, Marouane Chamakh and Dwight Gayle combined to offer similar, but the urgency and tenacity of their midfield firstly enabled them to stay in the game despite a Sunderland revival after half-time. It almost goes without saying that a red card and penalty at 1-1 is a pivotal moment.

Yet the pertinent issue remains Sunderland's midfield - despite Ki Sung-Yueng's arrival that was announced on Saturday. That Cabral remained on the bench, not only for the start of the game but during when Palace were gaining an ascendancy in the middle of the pitch, fails to correlate with Di Canio's notion that he is being left out for tactical reasons - especially when Vaughan has not only shown he is not suited to playing in a two-man midfield, but also not fully fit. Granted it is one area of the team, but the most crucial. A Fletcher and Jozy Altidore partnership suggests promise, Modibo Diakite was an effective ‘stopper' in this game (he made 4/4 successful tackles and 13/13 successful clearances), but it is who stand in front of him that needs deciding with a tricky run of games upcoming.

Crystal Palace Vs Sunderland: As It Happened