Our weekly tactical analysis reflects on Saturday's defeat at The Hawthorns. 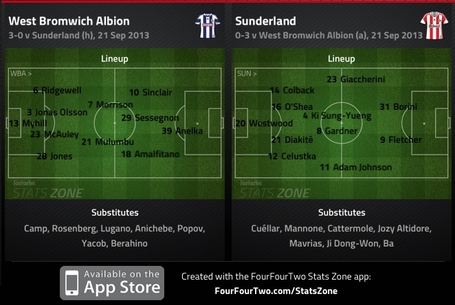 Paolo Di Canio had cited a lack of understanding - and cohesion - amongst his side in the wake of recent defeats, yet it was of little surprise to see him make changes to the starting line-up - particularly in central midfield. Prior to his sacking on Sunday evening, it was getting to the point where he hoped to stumble upon his best combination, unless Lee Cattermole could ultimately prove him wrong and provide the grit to Ki Sung-Yeung's guile.

Nevertheless, Di Canio also changed his front pairing - as Fabio Borini made his first start at the expense of Jozy Altidore - and the Italian found strike partner Steven Fletcher with just one pass before he was withdrawn on the hour mark. 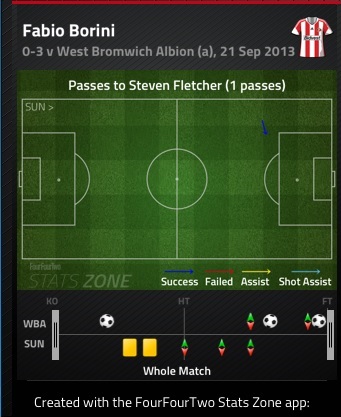 With John O'Shea returning to the side after being sent off at Crystal Palace, the hope was that he could revert to being the calming influence rather than the cause of panic. Yet, his carelessness for the opening goal portrayed otherwise. Having initiated Stephane Sessegnon at the edge of the area, he - along with Craig Gardner, another supposed senior figure - then failed to track his run into the box, gifting the former Sunderland man a plethora of space in which to fire home from Keiren Westwood's save.

The introduction of Cattermole in the second half at least equipped Sunderland with another player willing to take on the ‘burden' of possession. He was twice involved in the move that saw Fletcher fire over - and ultimately injure himself - and such responsibility will be crucial over the coming weeks. 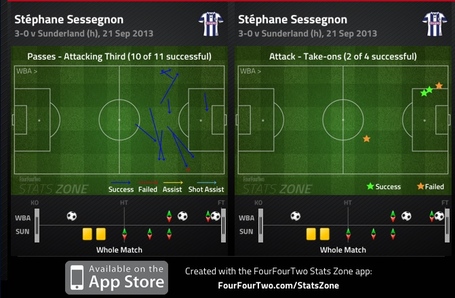 Whilst still short of his best, Sessegnon remarkably proved to be constant threat to a group of players that knew his game - good traits and bad - to a tee. With the home side set up with just Nicolas Anelka as a focal point, it defied logic that not one Sunderland player took it upon themselves to make marking Sessegnon a part of their game. It was perhaps arrogance on Di Canio's part not to include it in his tactical detail, and as a result Sessegnon grew into the game, often receiving possession just inside the attacking half and moving the ball to the flanks.

Fletcher's injury, after Sunderland had used all three substitutions, just compounded last week's events. Just minutes before, Steve Clarke opted to bring on Claudio Yacob, which was decisive in West Brom capitalising on their one-man advantage. The Argentine recovered the ball on four occasions in the 20 minutes he was on field, and ensured his side kept probing for a Sunderland gap by completing 22/23 passes - most of which simple, unremarkable balls which kept his team in possession. However, one of his forward passes was into the feet of Victor Anichebe, who held the ball up before finding Amalfitano to score.

The performance proved almost as disappointing as the result in many respects - there is still friction between how Sunderland wants to play and what is currently being offered up. 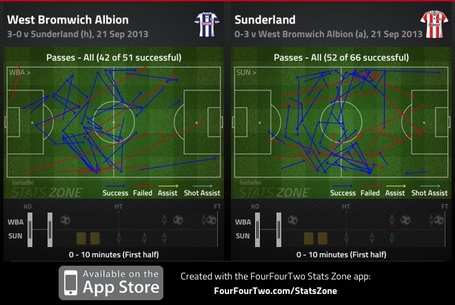 During the opening exchanges, Sunderland looked the more comfortable - perhaps less nervous would be more apt - with the ball (the graph above indicating West Brown's tendency to go long early on), but a common trait of this season so far is that the Black Cats are unable to capitalise on their ascendancy. Despite trailing for much of the game, Sunderland held their own in terms of possession whilst retrieving the ball more often and forcing their opponents into almost twice as many clearances (41 to 23). Errors attributed to each of the goals, and Sunderland's transitional play was thwarted by the impressive Youssuf Mulumbu (see graph, below). 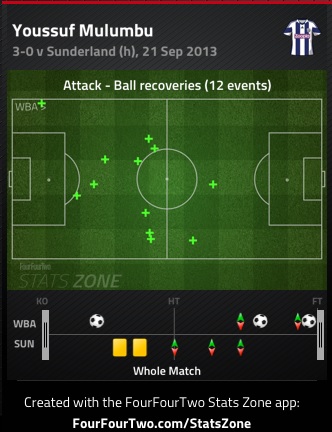 Moving forward, Sunderland need to get as many things right off the field as they do on, giving Sunday evening's news.

West Bromwich Albion Vs Sunderland: As It Happened