Our tactical recap on Sunderland's latest outing sees us analyse the 1-1 draw at St. Mary's Stadium.

Share All sharing options for: Talking Tactics: Southampton (A) 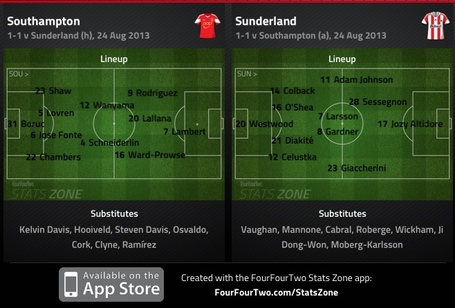 Paolo Di Canio made two changes to the side that lost to Fulham on the opening day, as Craig Gardner returned from suspension to partner Seb Larsson in midfield and Modibo Diakite made his debut at Valentin Roberge's expense. Southampton were unchanged from their win over West Bromwich Albion, meaning record signing Pablo Osvaldo started the game on the bench. 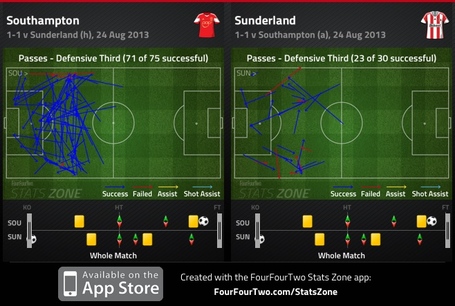 The decision to include Diakite was to match a physically assured defender against the aerial prowess that Southampton possesses in attack. Considering what we saw of Roberge last week, there was going to be a reduction in passes out of defence for both tactical and personnel reasons - Diakite and O'Shea combined for just 22 total passes, whilst Southampton's defensive pairing Dejan Lovren (63/66 successful passes) and Jose Fonte (46/52) were the first and fourth highest passers respectively.

On the face of it, it worked, as he and O'Shea successfully made 19 clearances (out of 20). Despite that, the former Lazio man just managed 1/4 aerial duel wins in his own penalty area (2/5 total), which enabled the Saints to recycle attacking moves. It proved to be quite the baptism of firepower for Diakite, but his attitude and application was commendable. 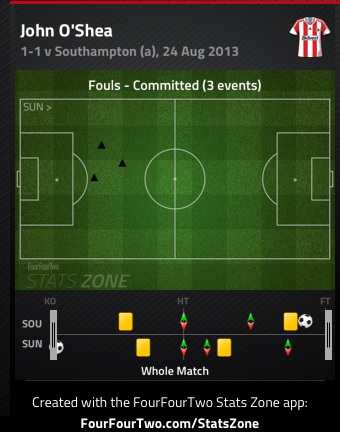 Further forward, Larsson was impressive as Sunderland's central midfield set about trying to blanket a vibrant Southampton midfield. He made the most interceptions in the game, attempted the most tackles (5, 3 won) and his ball recovery total was only bettered by Victor Wanyama. There is always a concern with the Swede - and Gardner for that matter - being susceptible to conceding fouls, and he matched O'Shea in that department, yet his energy and determination provided a buffer that the home side found difficult to surpass. 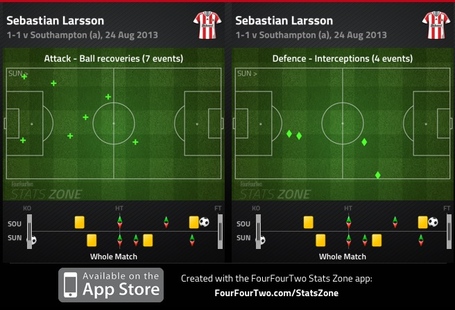 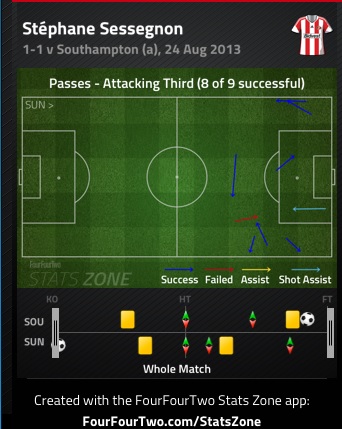 For the second week running, Stephane Sessegnon was subdued to the extent that Sunderland were hamstrung in attack. He completed just 10 passes before being replaced at half-time, again with the nature of those passes bordering on ‘safe-to-certain' (see graph, above).

Ji Dong-won was introduced after the interval, and was responsible for three of the five chances that Sunderland created in open play, with the sixth ending in a mis-hit volley from the South Korean. Whilst Ji is very much still adapting to English football, his movement and spacial awareness enable him to contribute as a support striker. 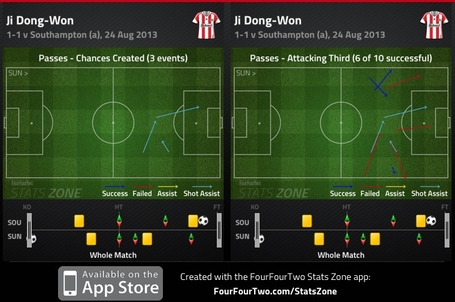 It almost proved to be a role reversal from last week for Sunderland. Having dominated proceedings against Fulham without reward, they ground out a point on the road which was only minutes away from being three.

Again conceding from a set-piece was a frustration, particularly as Sunderland had defended dangerous deliveries adequately for most of the game, yet the more pertinent problem remains one that everyone connected with the club is aware of - aside from Sessegnon's form plummeting.

Granted, Di Canio's reasoning for selecting Gardner over Cabral stood up somewhat, but he has seldom been able to assert his authority on games as a central midfielder since arriving at the club, and we are now entering his third season. Whilst it may have been a point-proving exercise from Di Canio to Ellis Short - Cabral is fine but we need another - that tactic was adopted by Martin O'Neill last season and proved foolhardy. Sunderland's revolution needs a midfield resolution.

Southampton Vs Sunderland: As It Happened