Sunderland Targeting Swansea Man To Bring The Ki To The House?

There is a new midfielder on Sunderland's radar, and he is shamelessly pun-tastic.

Share All sharing options for: Sunderland Targeting Swansea Man To Bring The Ki To The House?

Since Tom Huddlestone joined Hull City last week, it has all gone very quiet with regard Sunderland's pursuit for a new central midfielder. That could be about to change, though, with Swansea City's Ki Sung-Yueng apparently attracting interest.

Paolo Di Canio has repeatedly stressed the importance of adding some creativity from central positions, laying down a list of criteria for the role including physical presence, experience of the English game, and sufficient quality on the ball to 'bring the keys to the house'.

According to Sky Sports Italia journalist Gianluca Di Marzio - one of the most accurate football sources around - the Swansea City man could be the man to fill that void. 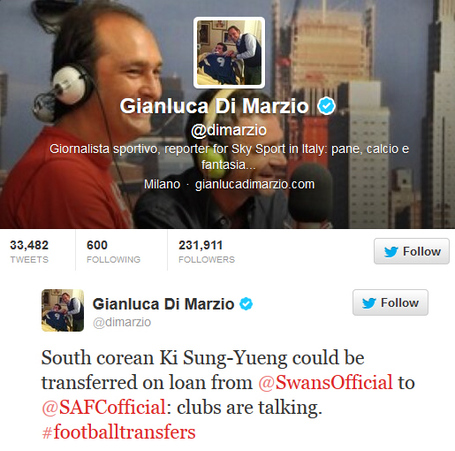 It would seem there is little more than initial discussions at this stage, with the 24-year-old Korean likely to be just one of a number of targets.

But he would appear to fit the bill and tick an awful lot of boxes. Let's see if anything further develops.