With the first game of the new season done and dusted, we take a tactical look back at Saturday's action. 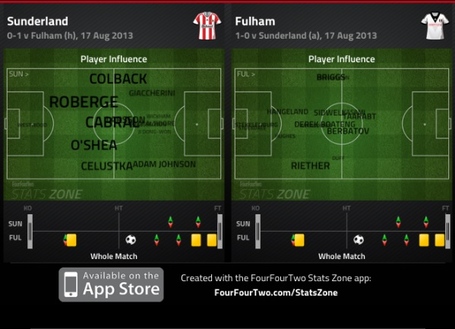 For those familiar with this feature, you will know that we routinely begin with the lineups and each manager's indications behind their selections and formations, yet StatsZone's ‘Player Influence' graph above is a fine depiction of Paolo Di Canio's intentions.

The spine of Sunderland's team was dominant; width was provided - and maintained - by the full-backs, allowing both Adam Johnson and Emanuele Giaccherini to mischievously wander in-field; all this possible whilst negating the threat of the opposition (the bolder the name, the more ‘influence' the player had during the match).

With several changes this summer - both on and off the field - it was inevitable that there would be a new look about Sunderland. As a first impression, however, the change is pretty drastic. Whilst the home team retained the energy and capability to press the opposition in advanced areas from Di Canio's early games in charge, there were marked differences when in possession.

Valentin Roberge was a key part of Sunderland gradually building attacks from deep - his 79 passes were the most in the game, followed closely by John O'Shea (69) and Cabral (62), who as the deepest of the midfield players provided the ‘next stage' of attacks. Granted, that Johnson, Giaccherini and Stephane Sessegnon managed less passes between them (a total of 70) than Sunderland's new centre-half conveys that they were unable to fully assert their superiority, but the implementation of Di Canio's wishes was, at least, encouraging. 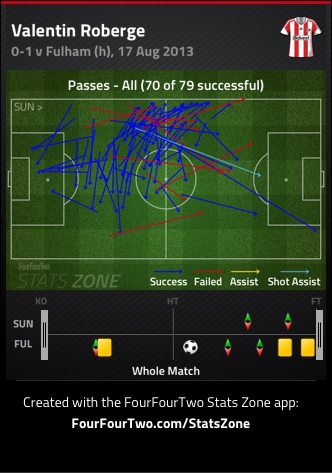 From what we already knew of Di Canio's tactical tendencies, Sunderland were again able to press high and win possession (Opta recorded 48 ball recoveries, compared to Fulham's 21, with the graph below showing more than 10 occasions whereby Sunderland won the ball back in an attacking area). 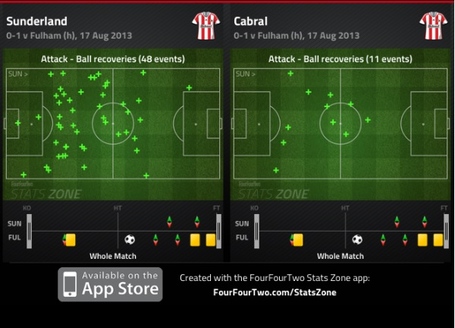 Cabral, another new signing seemingly hand-picked for this role, led the way with 11 ball recoveries - with the central defensive pairing and Jack Colback tied for second-most with seven. The Cape Verdean also contributed five successful tackles - again high up the pitch - which ensured that Sunderland turned the ball over closer to the opposition goal. 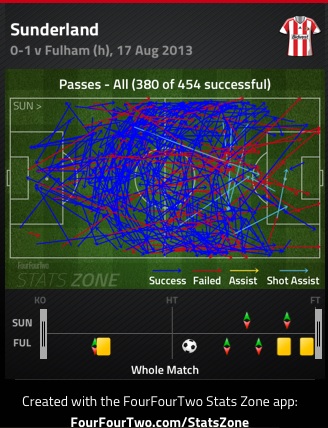 Sunderland completed 50 more passes than Fulham attempted (380 to the visitors' total of 330), but the graph above illustrates the frivolity of the home side's passing close to goal. For large periods of the game, Sunderland carefully constructed attacking situations from the back, into either Cabral or the full-backs, and onwards. But it was then that lacked the incision, and at times the composure, to convert the previous good work into something more tangible.

Statistically, Sessegnon's performance holds some merit (excluding the low pass total). He was credited with three chances created (two of which lay-offs outside of the area), completed 9/10 passes in the final third and had an 85% success rate overall, yet not once did he receive possession inside the opposition area. He received just three passes from Jozy Altidore and returned the favour on one occasion - which led to the third shooting opportunity - but the safety of his performance was unsettling both generally and in driving Sunderland forward.

The creative midfielder that Di Canio has lusted after all summer is the missing piece, but on this evidence it is a significant one.

As with attacking transitions, Di Canio has often talked about Sunderland's attack this summer as a quartet. Both Johnson and Giaccherini are expected to come inside, which was most evident when the latter tested Martin Stekelenburg from outside the area after Johnson had cut inside to evade a would-be tackler. 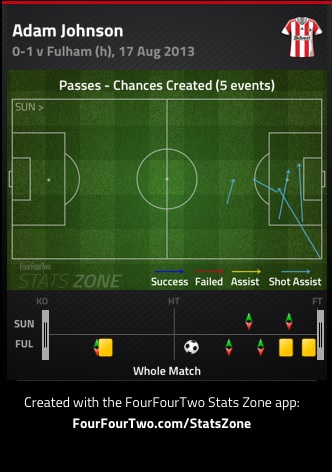 Johnson was credited with the most chances created in the game, with the graph above showing all of his open play contributions coming from away from the touchline. Much like Sessegnon however, both wingers were only able to find Altidore with a pass on four occasions combined, all of which coming outside the penalty area. Despite that, the American proved useful in maintaining Sunderland attacks with his work with his back to goal, also managing to fashion chances for himself with his strength and drive.

Tactically, it was a terrible goal to concede. The Secret Footballer, some time ago, posited that Premier League teams have a man stationed in between the corner of the six-yard box and the near post as a way of protecting both areas, yet Sunderland lined up with two men guarding each, leaving the far post vacant in the process. From there on it somehow managed to get worse.

Whilst Fulham were ineffective on the road last season, the majority of the performance was commendable. Should Di Canio's methods continue to be carried out, perhaps with a little more purpose once the ball is in the attacking third, then the Italian's notion that Sunderland will do well this season should come to fruition.

Sunderland Vs Fulham: As It Happened