Best Player Of The Past Ten Years: Semi Final Review

We're nearing the end as the semi finals of our player poll come to an end. The final is night, let's look at who made it...

Share All sharing options for: Best Player Of The Past Ten Years: Semi Final Review

Only two matches to discuss, and both with differing reasons as to why they even happened.

The first has people surprised. Certainly me. The general outpouring was that Bolo Zenden shouldn't have even been at this stage as he came up against Steven Fletcher, who apparently also shouldn't have been there.

Zenden's route to this stage was relatively easy, although that really was just the luck of the draw. Victory in the first round against Nicklas Bendtner was pretty easy. Defeat could have come against Djibril Cisse in the second round but you the people voted him through while the Quarter Final against John Mensah was a straightforward one.

Similarly Fletcher drew some criticism for getting this far. Craig Gordon was a favourite of the time but proved to be less of a challenge than many expected. I thoroughly expected to say goodbye to Fletcher in the next round against Darren Bent, but the ignominy of his exit proved to still be a sore point for fans who voted Fletcher ahead of Bent. Mart Poom was his Quarter Final opponent, and despite his great displays and goalscoring prowess, the 'keeper couldn't stop Fletcher's dominance through the tournament so far.

A reminder to everyone, you voted for this to happen.

And so Bolo Zenden and Steven Fletcher met in our first Semi Final earlier this week. Much like it had been in the other rounds, Fletcher brushed aside his competition and was put into the final after your votes saw him take a 73% to 27% win over Bolo. A comprehensive crushing, but the Dutchman can be pleased he made it this far.

The second semi final was a much more closely contested encounter. A clash which many readers felt could have been a worthy final in itself was duked out between Steed Malbranque and Simon Mignolet.

The two meet having battled through what seemed on paper to be the tougher side of the draw, which I guess is just the luck of the draw and how things panned out when we at RR Towers quite literally wrote all the names down and drew them out a hat.

Malbranque got here by virtue of being voted ahead of Lee Cattermole and Kieran Richardson in the first and second rounds, followed by Julio Arca in a fiercely contested quarter final.

His opponent, Mignolet, also saw off some tough challenges in Marcus Stewart, Stephane Sessegnon and Danny Rose before he could take on Steed.

Following a topsy-turvy day of voting it was the Belgian born Frenchman who ousted the fully-fledged Belgian came out on top by a very narrow margin. A fair result given the quality of opposition.

And so we have our final set between Steven Fletcher and Steed Malbranque to be crowned the player you feel served us the best in the last ten years.

Here's how they got to the final with the penultimate bracket; 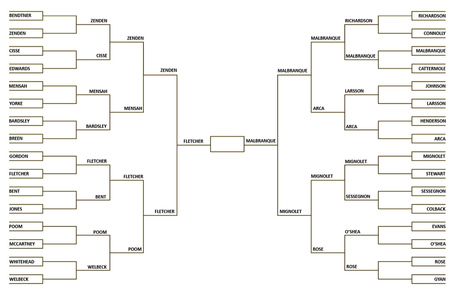 And so our final will be on Friday August 2nd, with voting open at 10am. Be sure to cast your vote for your favourite in the people's vote!